"It’s so warm today that I could go without a coat and I want to start a diary today because I enjoy writing so much."

With these words, written on Easter Monday 1901, eight-year-old Alfred Reis started documenting his young life in a blue octavo that would accompany him for the following three years. At irregular intervals he made observations about his vacations, reflected on family occasions, and wrote about experiences with his younger sister Gertrud.

In 1903, the little book was full and Alfred Reis did not continue to keep a diary. Among his surviving papers, it is the only document that provides a personal glimpse into his life. Only a small number of further documents and photographs pertaining to his time at university and in the military enable us to retrace the stages of his short life. 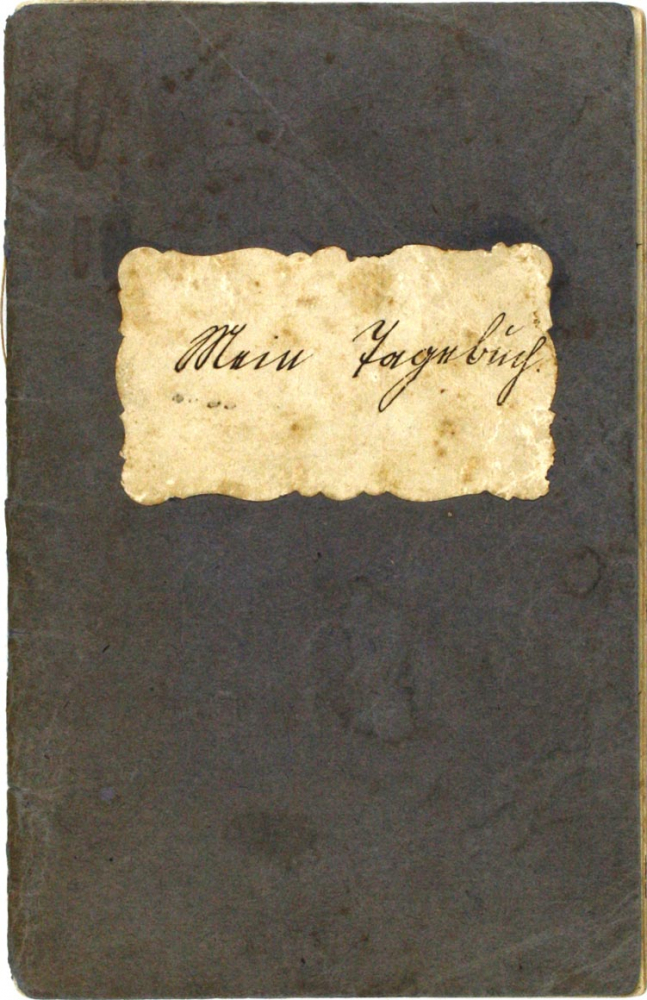 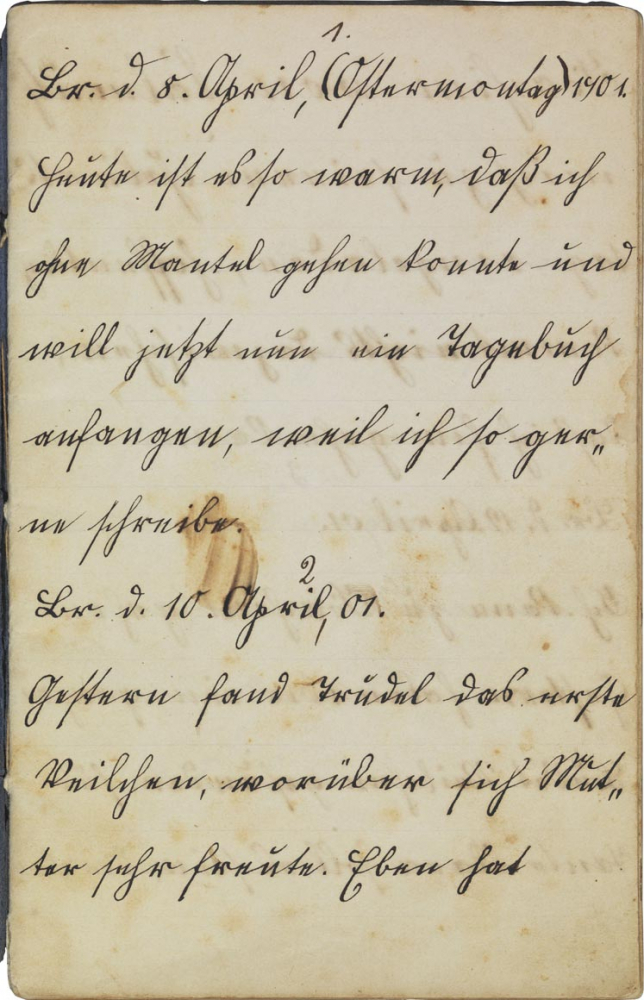 Alfred Reis grew up in Braunschweig. His father, Eduard Reis, was a banker and lottery collector and lived a comfortable life with his wife Hedwig and their two children.

After graduating high school from the Wilhelm Gymnasium, Alfred Reis left home. He had decided to study dentistry in Würzburg, where an institute with state-of-the-art equipment was soon to be opened.

If the young student was intimidated by his new surroundings, his fears no doubt evaporated when he joined the student fraternity VEDA (whose name means knowledge in Sanskrit).

Of the many student fraternities in Würzburg, VEDA was uniquely egalitarian, accepting members regardless of their religion. The fraternity offered a rich social life, with the balls it held on the occasion of the Jewish festival of Purim becoming legendary. Fencing and dueling were central to the fraternity. Practice was mandatory three times a week and fencing duels with affiliated fraternities took place regularly.

Alfred Reis found a good friend and mentor in his fraternity brother Rudolf Rülf, who was also studying dentistry and was the son of the chief rabbi of Braunschweig.

Alfred Reis as a member of the Charge (executive) of the VEDA student fraternity; Würzburg, about 1912; Jewish Museum Berlin, gift of Alfred Rülf; photo: Jens Ziehe

The war fever of 1914 was shared by the members of VEDA as well.

Alfred Reis volunteered for military service. In November, he was assigned to Infantry Regiment 79 in Hildesheim for basic training. Two post cards that he sent to Rudolf Rülf, who was then serving at a reservist military hospital, have survived. 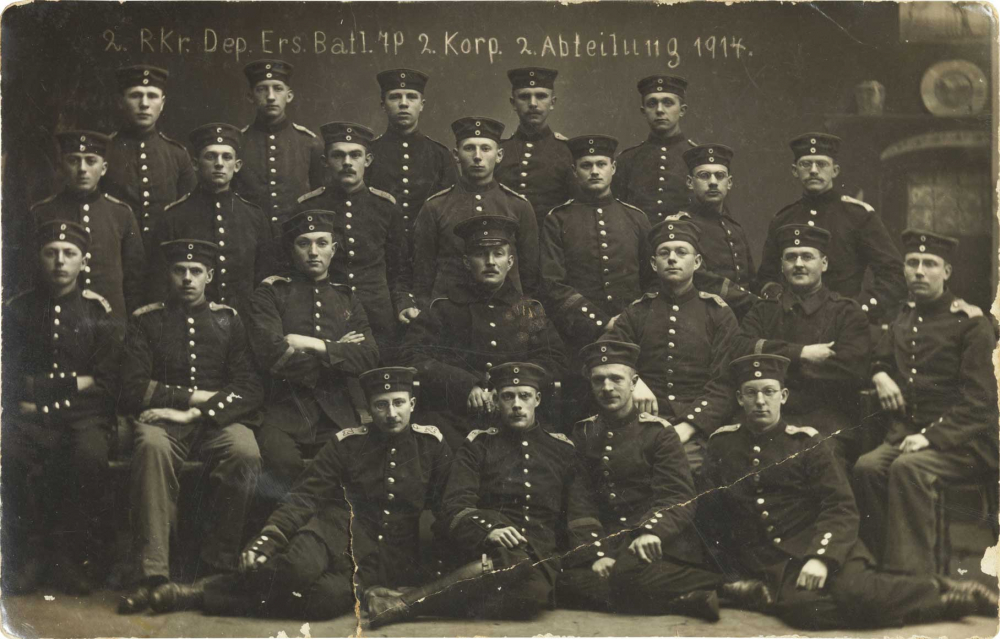 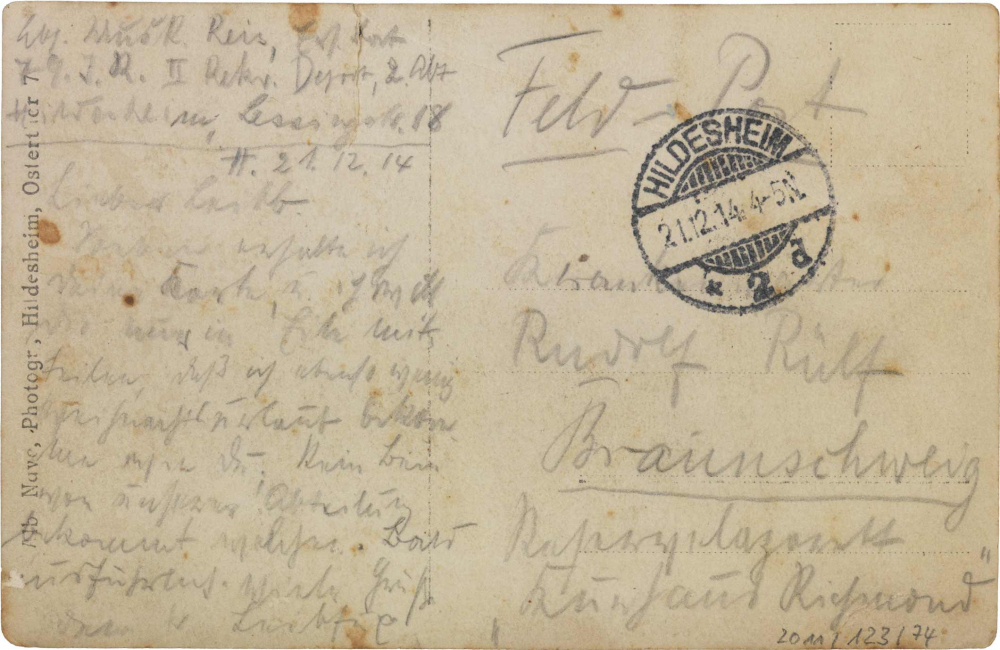 Back of a postcard from Alfred Reis to Rudolf Rülf; Hildesheim, before 21 December 1914. He writes: “Dear big brother [Leibbursche], I just received your card and quickly wanted to let you know that I am getting just as little Christmas leave as you. None of the B... [illegible] in our division are getting any. More on that soon. Best wishes, your faithful little brother [Leibfuchs]”; Jewish Museum Berlin, gift of Alfred Rülf; photo: Jens Ziehe 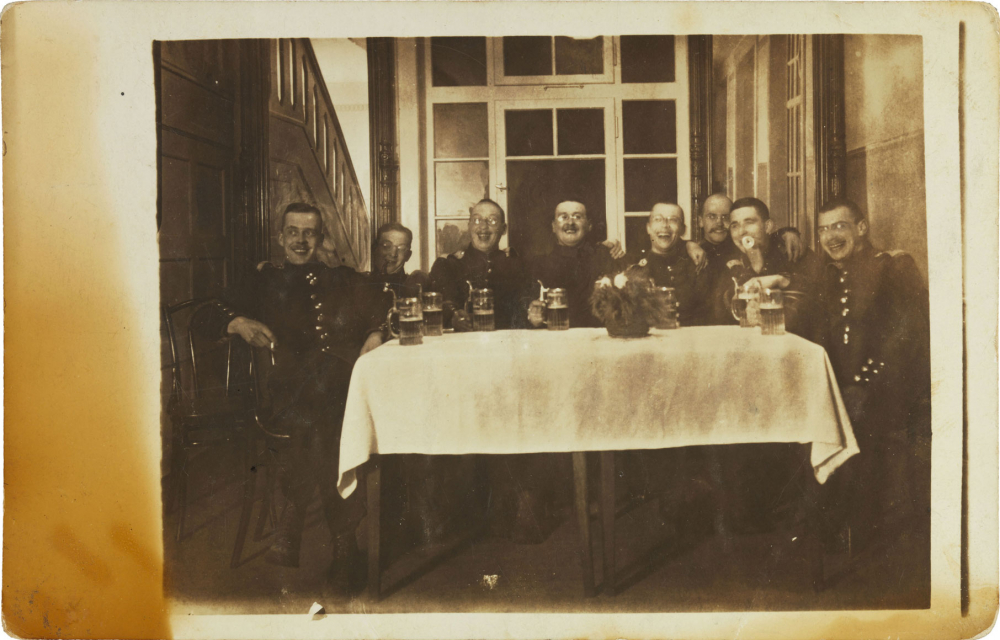 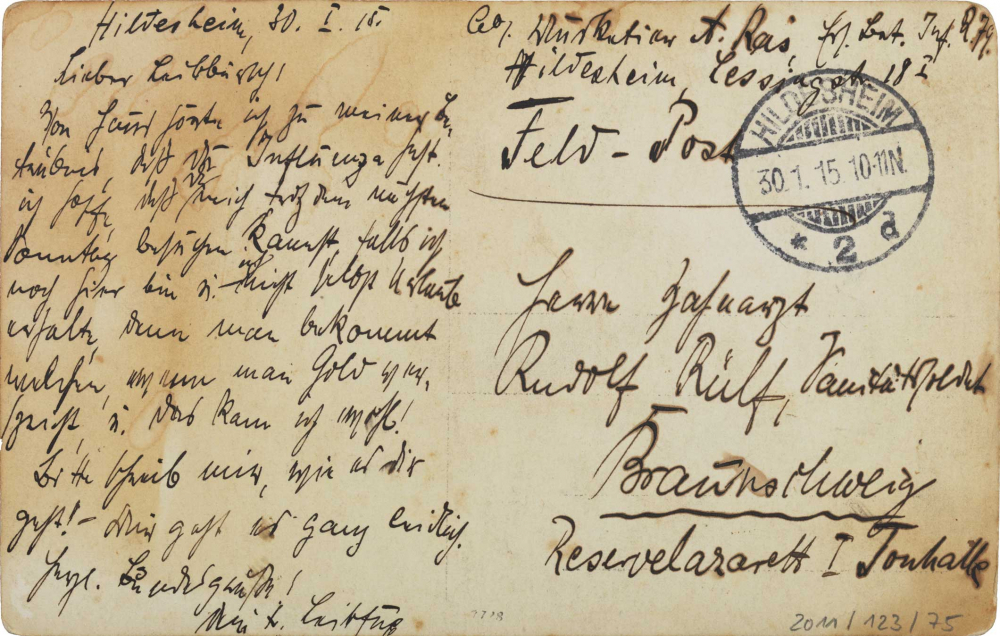 Back of a postcard from Alfred Reis to Rudolf Rülf; Hildesheim, 30 January 1915. He writes: “Dear big brother [Leibbursch]! To my dismay I heard from Hans that you have influenza. I hope you can still visit me next Sunday if I’m still here – and not on leave myself, because you can get leave by promising gold, and that I can!” Jewish Museum Berlin, gift of Alfred Rülf; photo: Jens Ziehe

From Kysylyn to Langemark

When it came time for his deployment, Alfred Reis traveled to the Eastern Front with the Fusilier Regiment General Field Marshall Prince Albert of Prussia 73. After recovering from a minor injury sustained in Kysylyn, Ukraine on 16 July 1916, he was transferred with his unit to Langemark, Flanders on the Western Front.

"The artillery battle in Flanders raged yesterday without interruption, starting early in the morning and lasting late into the night. The enormous force of artillery has had the greatest impact in this war."

It was the very same day that Alfred Reis went missing in action.

The huge scale of the battle was recorded by the writer Ernst Jünger, an officer in the same infantry regiment, in his war journals. His words give a sense of what “greatest impact” signified:

"Hours like those we had just experienced were, beyond doubt, among the most horrible of the whole war.... You know that if it hits you, no cock will crow therafter." 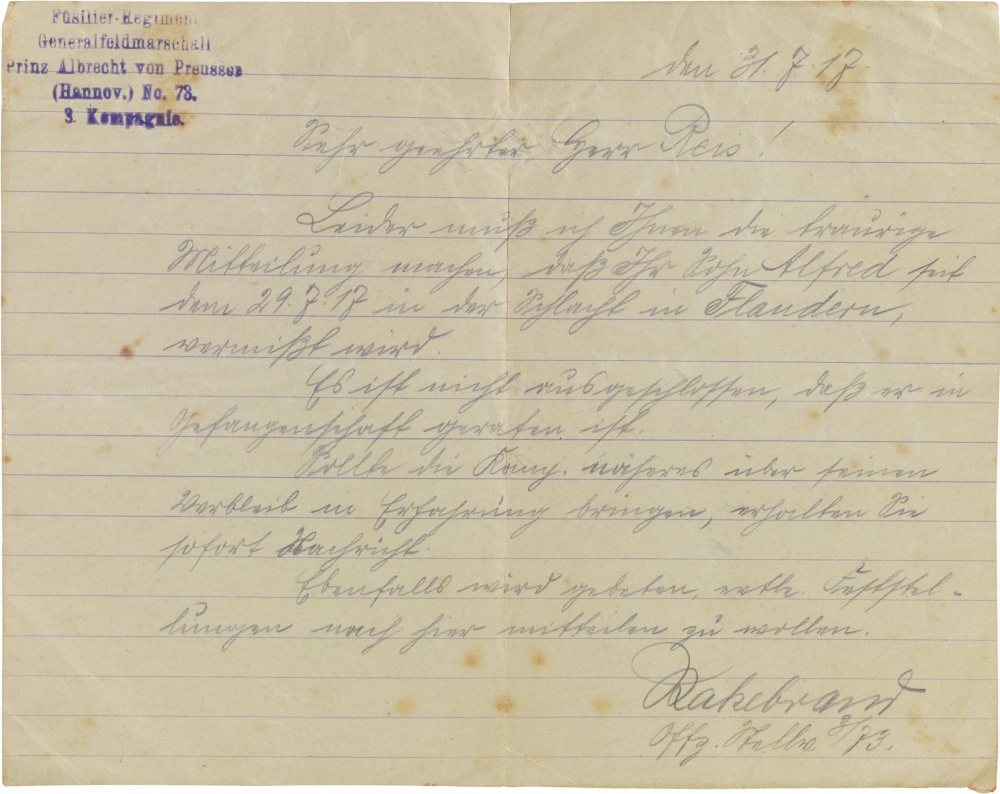 Letter from the Fusilier Regiment to Eduard Reis notifying him that his son Alfred was missing in action; Flanders, 31 July 1917; Jewish Museum Berlin, gift of Alfred Rülf; photo: Jens Ziehe

Several days later, Eduard Reis received a letter notifying him that his son was missing in action. They could not rule out “that he [had] been taken prisoner.”

For months, the family wavered between hope and anxiety.

It wasn’t until March of the following year that an office in Braunschweig investigating the fates of soldiers missing in action was able to confirm the worst: Alfred Reis had been mortally wounded on 29 July 1917. During the ensuing Third Battle of Ypres, which lasted for months, his body was not able to be retrieved and remained missing.

Reis’ name was later listed on the honorary grave for the fallen Jewish soldiers from Braunschweig.

After the war, Rudolf Rülf married Alfred’s sister Gertrud. In 1923, she named their newborn son after her brother. 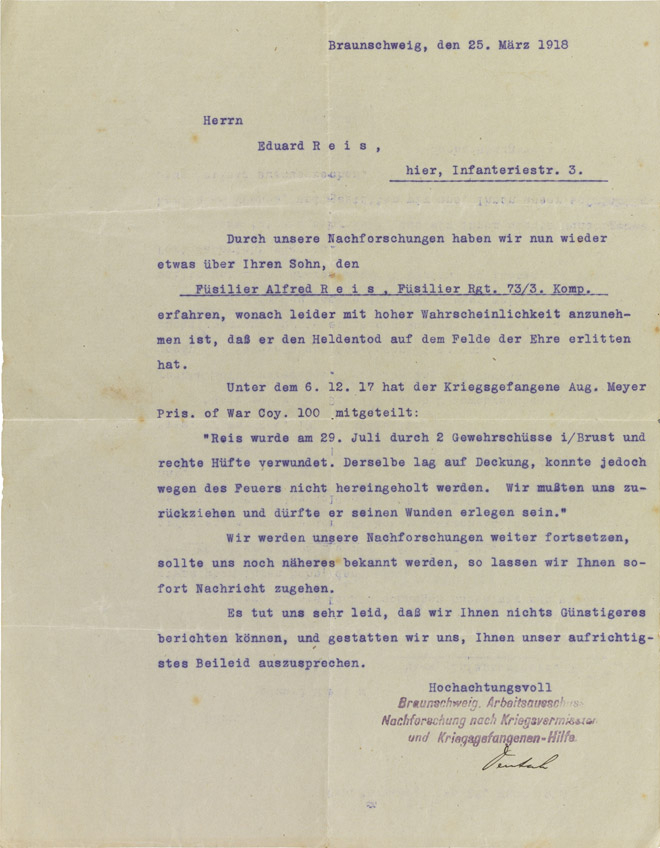 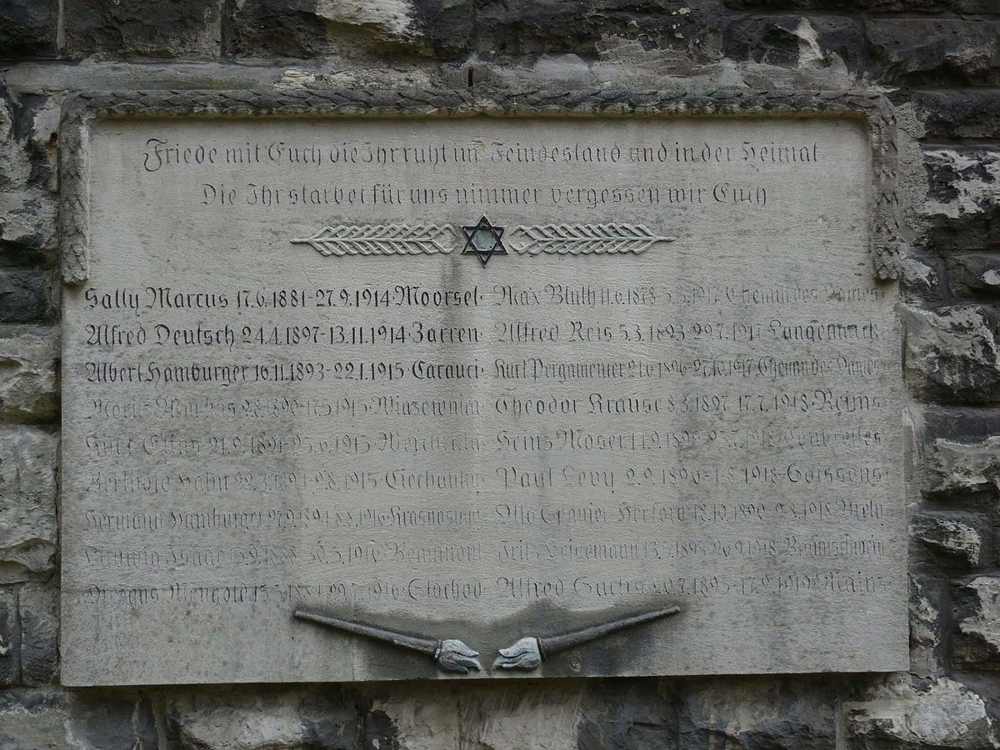 Memorial stone for Jews from Braunschweig who fell in the First World War at the Jewish cemetery, listing Alfred Reis; Braunschweig, 2011; CC BY-SA 3.0

You can find additional documents and photographs related to Alfred Reis in our online collections (in German).