"A quick note to let you know that I received the Iron Cross First Class today. Aren’t you amazed? Will send more details tomorrow if I can, as the bat[allion] will be attacking today. Goodbye."

Corporal Ernst Marcus sent this message to his family from the Eastern Front on 24 July 1917. Its conveys in all its brevity his pride upon being awarded the Iron Cross.

Only hours later, he was dead, fallen near the village of Svydnyky on the Stokhid River in the Volhynia region, southeast of the city of Kovel in today's Ukraine. 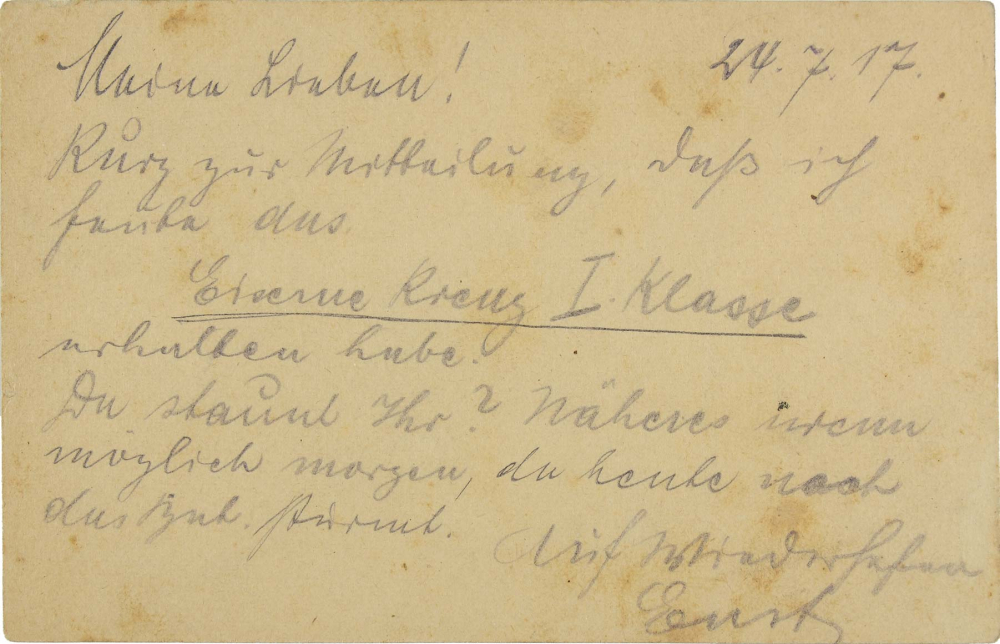 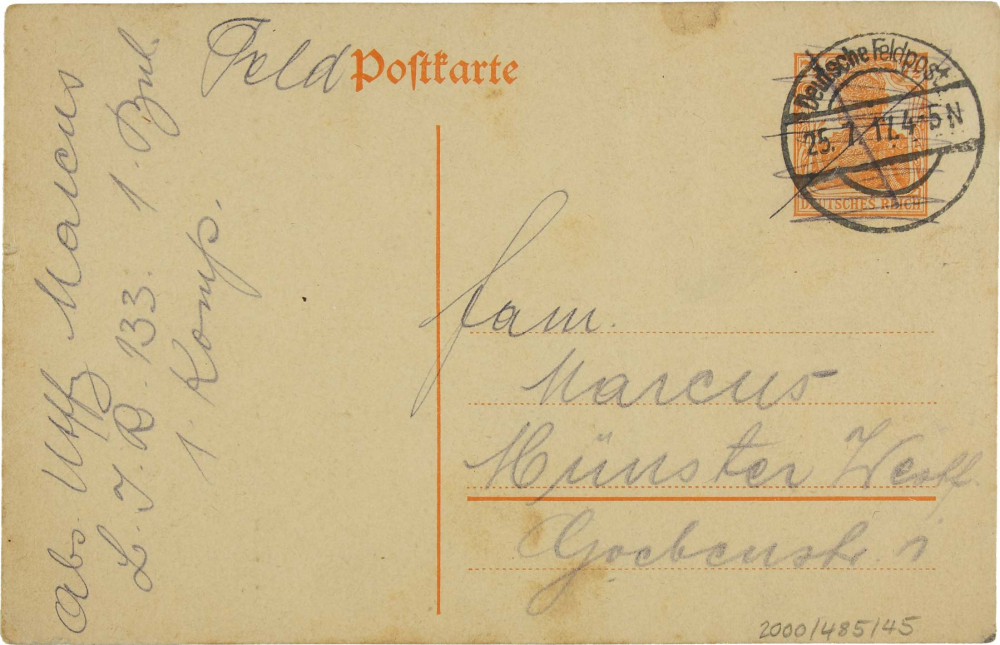 Ernst Marcus was born on 5 September 1893 in Münster, Westphalia, as the firstborn child of Elias Marcus and his wife Anna, née Dinkelspiel.

His father owned a shoe store in the city center but was much better known as an actor, writer, poet, and playwright, who composed many poems and plays in the Low German dialect of the Münsterland.
After completing school, Ernst Marcus trained to be a merchant and moved to Berlin in March 1915. 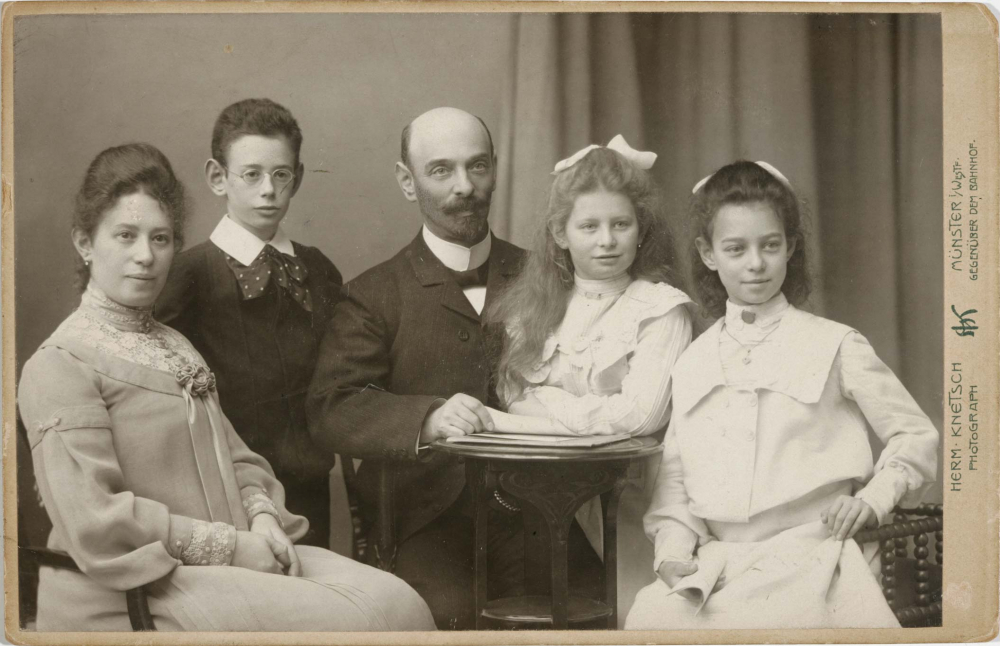 Conscripted into the Landwehr

Marcus was conscripted a year later into the army and joined the Royal Saxon Landwehr Infantry Regiment 133 as a "one-year volunteer."

He was first stationed in Zwickau, where he was trained as a military draftsman. In late June 1916, he traveled as part of a group of troop reinforcements to Volhynia. There, he was assigned to the First Battalion, First Company, which was stationed in Novyi Mosyr and embroiled in defensive battles in the first weeks of July. 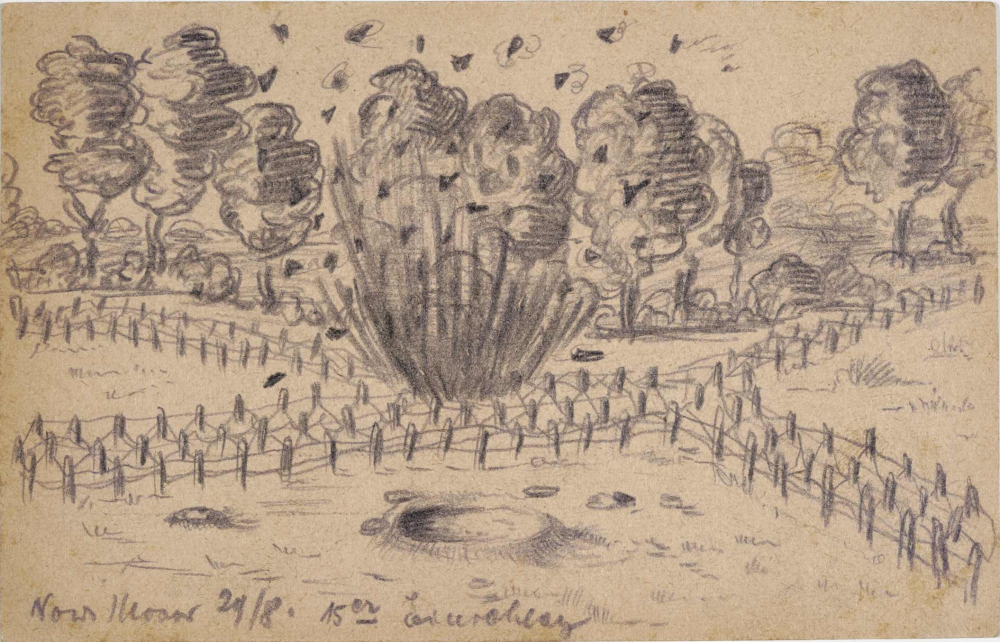 An Eye for Documentation

In his first months at the front, Ernst Marcus began drawing and sending numerous sketches on field service postcards to his family in Münster.

His illustrations document the daily life of his company: soldiers in the trench, eating, doing laundry, searching for body lice, as well as scenes from their leisure time, such as reading the newspaper, playing cards, and writing letters. 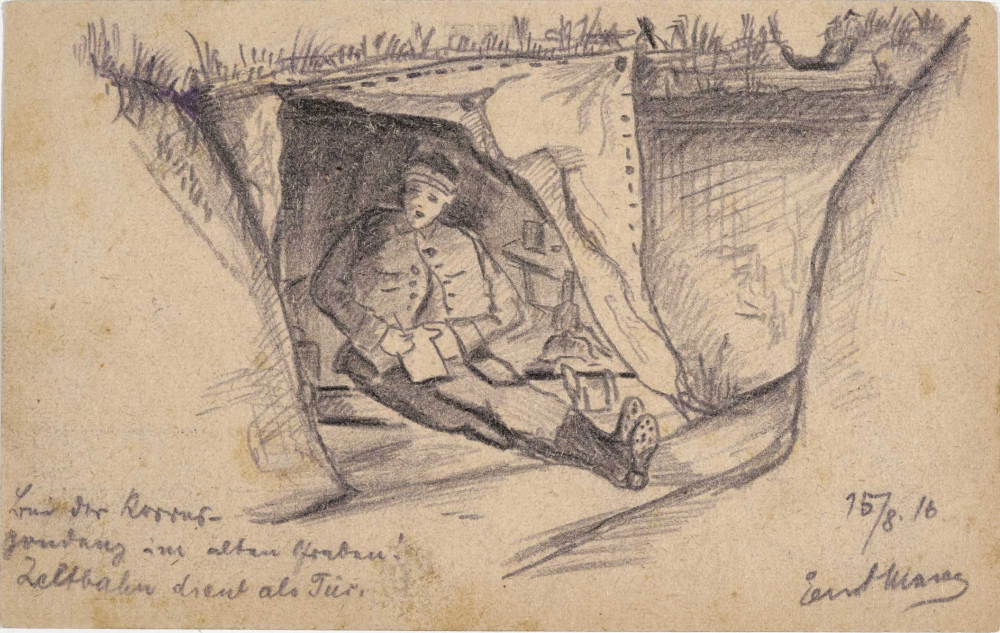 Ernst Marcus also drew many self-portraits: in uniform with the Iron Cross, in a steel helmet, and in a winter fur coat.

On one of the self-portraits, the twenty-two-year-old wrote that he looked to be thirty. It's unclear whether he was referring to his full beard or to the strain of his wartime experiences.

Marcus also keenly observed the local residents of the country, which was under German army occupation, and drew portraits of Jews in the town of Kovel as well as of Russian soldiers and prisoners of war. 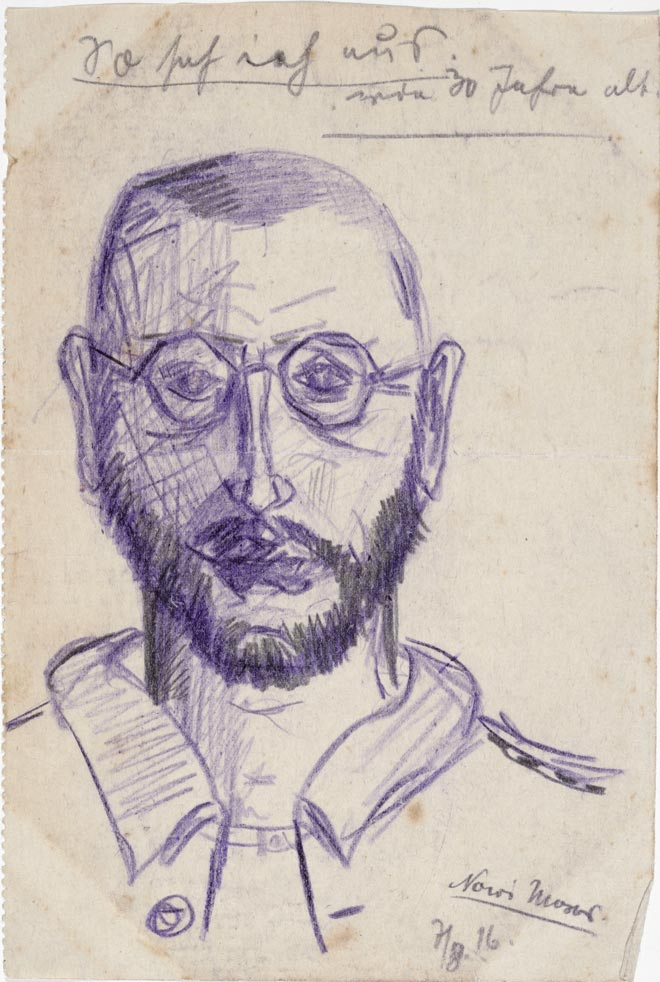 Self-portrait of Ernst Marcus ("This is how I look, like a 30-year-old"); Novyi Mosyr, 7 August 1916; Jewish Museum Berlin; photo: Jens Ziehe 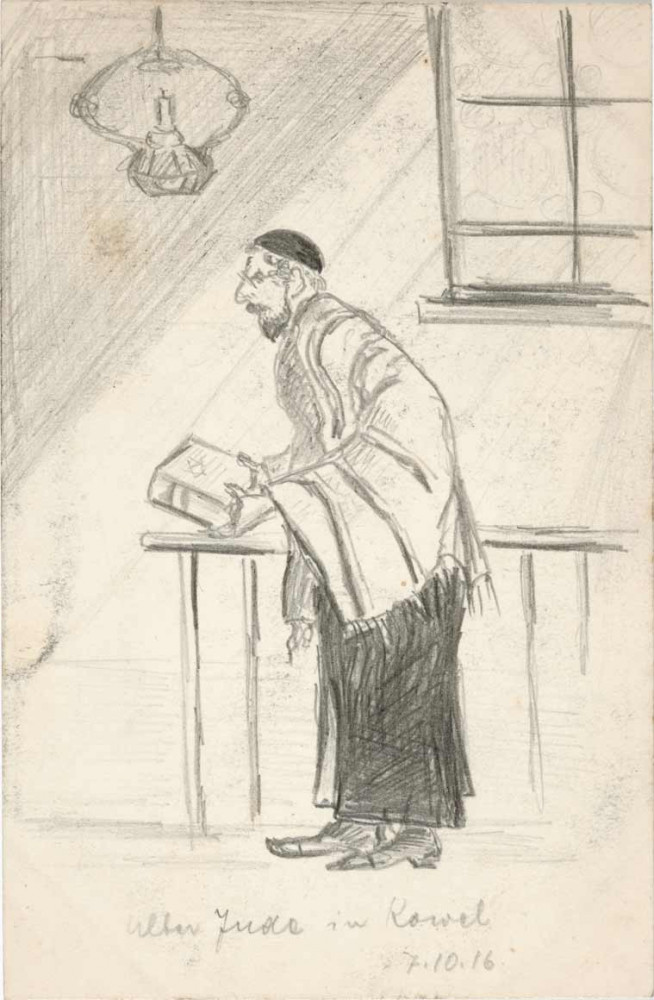 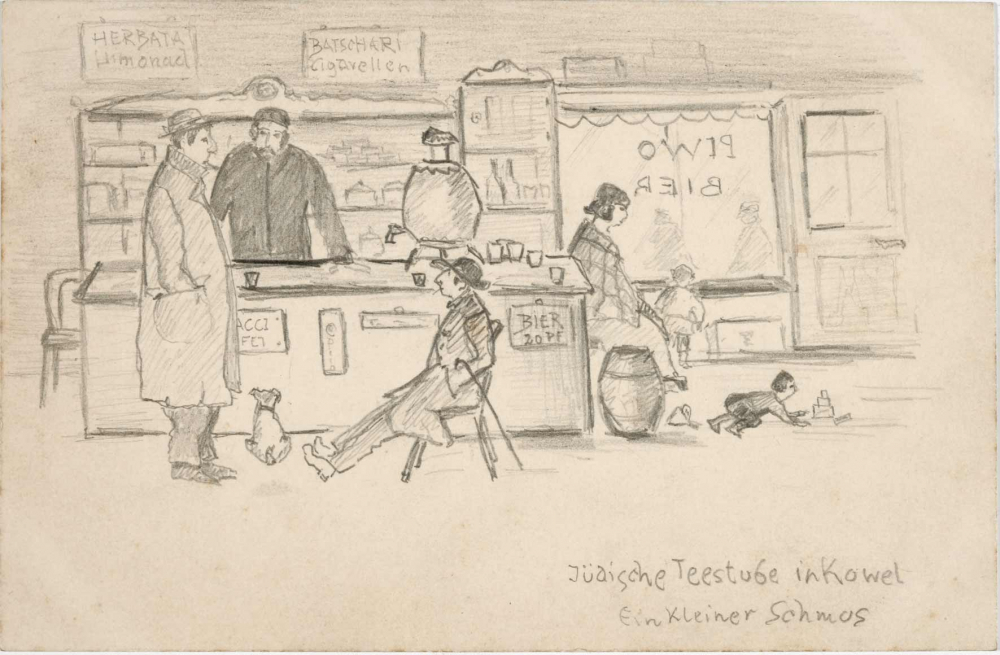 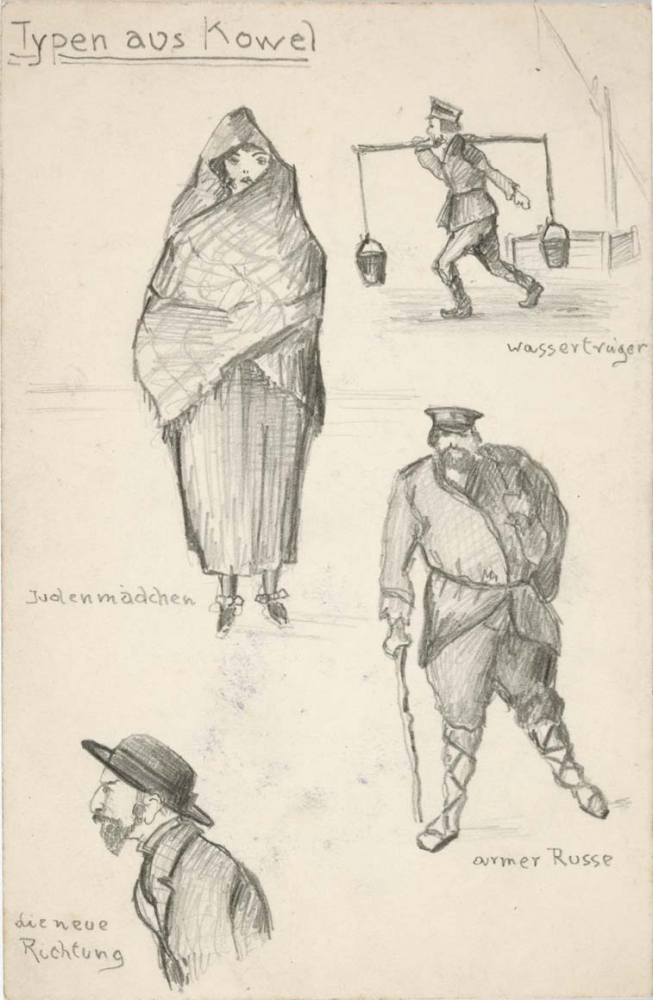 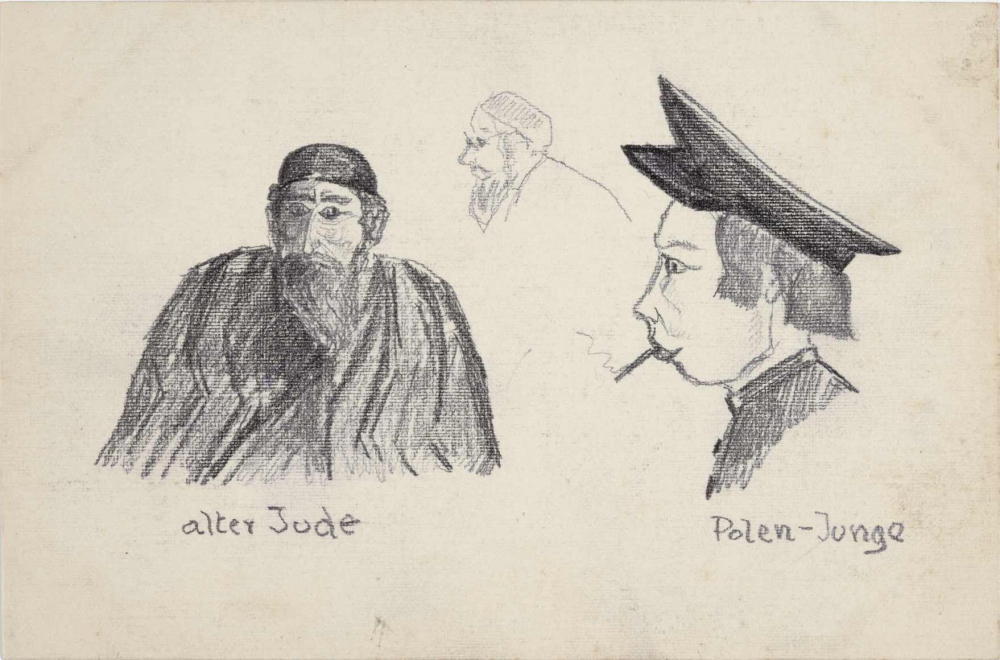 In early September 1916, Ernst Marcus was awarded the Iron Cross, Second Class for his courage.

He was promoted shortly thereafter for undertaking a daring maneuver:

"At daybreak on the 17th [of September], F[irst] Y[ear] Marcus, proven patrol leader of the 1st Comp[any], managed to take 2 prisoners from the Russians who were retreating from pickets 4 and 5 by fearlessly approaching them. The Division commander is promoting him to the rank of corporal."

Several days later, he sent his mother a postcard with a self-portrait as "Royal Saxon First-Year Volunteer Corporal Knight of the Iron Cross 2nd Class." 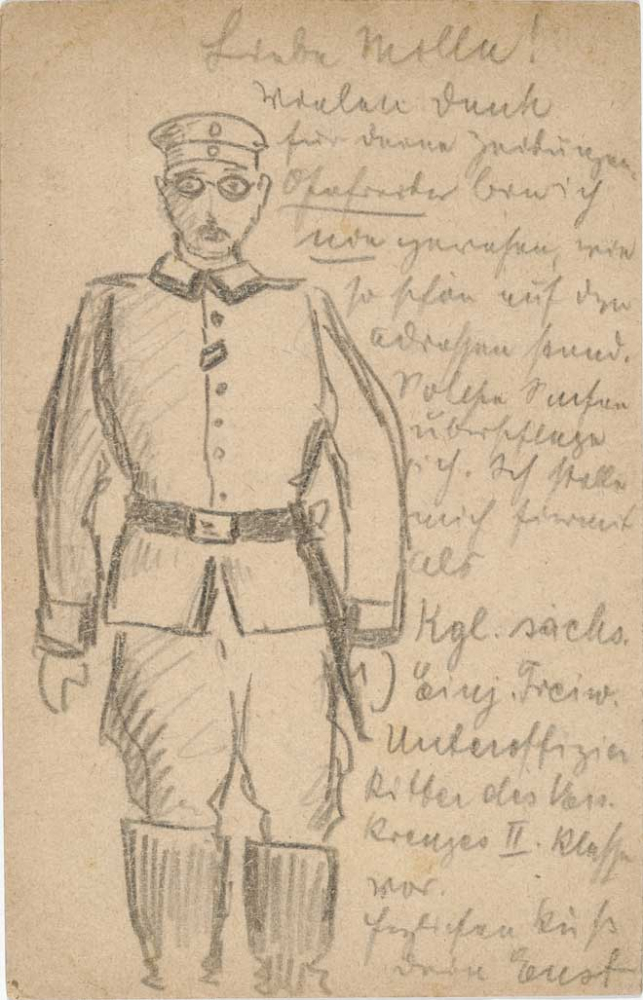 Beginning in November 1916, Ernst Marcus and his battalion were bogged down in months of trench warfare near the village of Svydnyky. Severe frost and snow, followed by a thaw and flooding made conditions even worse.

In early July 1917, the Russian infantry increased its artillery fire. The army command gave orders to take prisoners, in the hope of obtaining more information about the enemy’s positions. After a first attempt failed, a second attempt was made by a group of soldiers including Ernst Marcus. 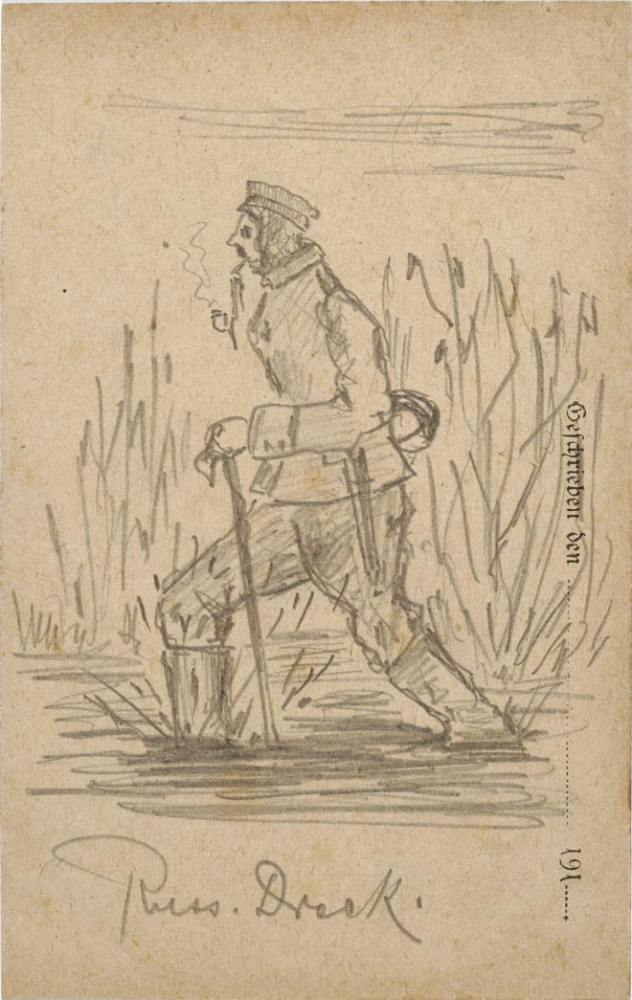 The regiment's logbook described the action as follows:

"On the 24th around 10.30 pm, a strike team of volunteers from the 1st Bat[talion] under Lt. [Lieutenant] Klahre left their position from the hill to capture the troops guarding the enemy roadblock. As shelling had not, as hoped, created a gap in the Russ[ian] barbed wire, it had to be blasted by using planted charges. At 2 am, the strike team finally forced their way into the enemy trench, overwhelmed the foes in a hand-grenade skirmish, and returned with 6 prisoners. Unfortunately, during this operation Lt. Klahre and Corporal Marcus of the 1st Comp[any], known for his exceptional patrol raids, died a hero’s death. Only at dawn were their bodies retrieved by the bold and fearless Lt. Krebs." 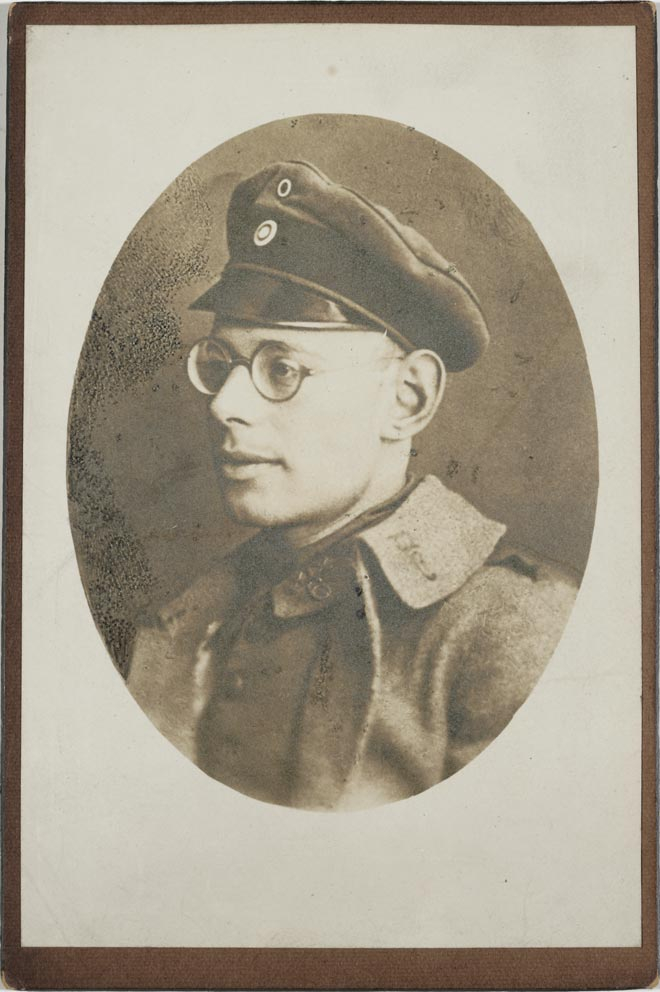 It had been, as the logbook states, "the last significant operation against the enemy" at this position.

Ernst Marcus was temporarily buried at the military cemetery of the nearby town of Popovychi.

The family's death notice announced that a funeral was to be held in Münster in September, but it took several more months before the body could be transferred and interred at the Jewish cemetery there on 6 March 1918.

After the war, the Jewish Community honored Ernst Marcus and fourteen other fallen Jewish soldiers from Münster with a memorial plaque in the synagogue. 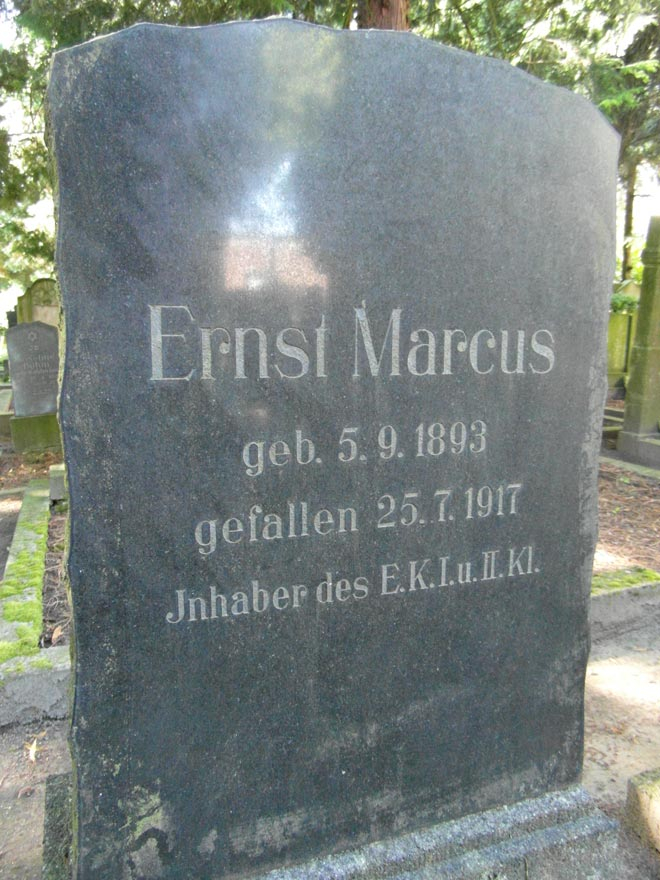 The Honorary Cross for Front-Line Combatants, established by Reich President Paul von Hindenberg, was presented to his parents in December 1934 "in the name of the Führer and Reich Chancellor."

You can find more of Ernst Marcus's drawings in our online collections (in German).

More at the Jewish Cemetery of Münster (in German)