On 19 November 1893, Hermann Hirschberg, the mohel of the Jewish Community of Schwetz in West Prussia, circumcised his eight-day-old grandson Erich, just as he had done for his seven sons in the preceding decades.

Hirschberg had been a circumciser for over forty-five years. As with each of his previous 693 circumcisions, he recorded that of his grandson in his mohel book.

When Hermann Hirschberg died in 1919, he had outlived his grandson Erich by one year. 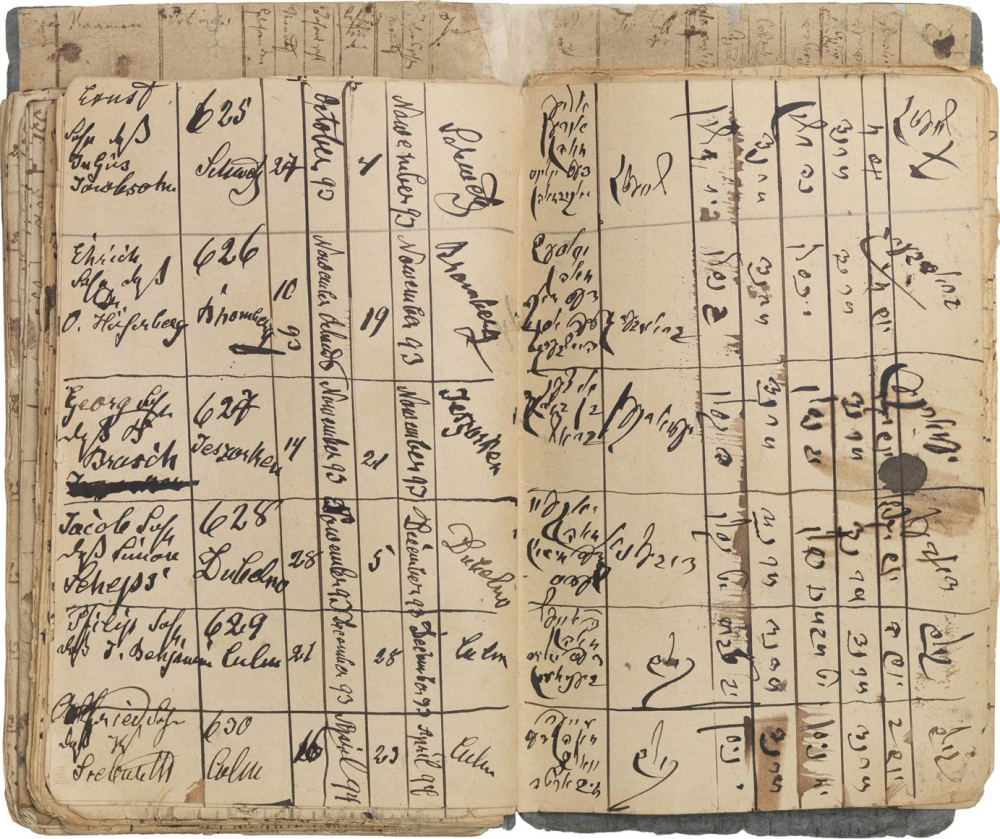 The Family in Bromberg

Erich’s father, Dr. Oskar Hirschberg, was a physician. He had opened a medical practice in nearby Bromberg in 1892 and married Franziska Knopf in October of the same year.
Erich was born a year later, followed by his sister Else in 1899. In 1910, the children lost their mother, who was barely forty years old when she died.

In April 1917, Erich Hirschberg began studying medicine at the University of Freiburg, following in his father’s footsteps.

Before the year was out, he had joined the Ghibellinia fraternity, which belonged to the Convention of Fraternities of German Students of the Jewish Faith (abbreviated as the K.C.), founded in 1896.

A “Cartel” of Fraternities

By joining the fraternity and the larger “Convention,” Erich Hirschberg was overtly declaring himself a proud Jew and a patriotic German. In its mission statement the K.C. affirmed it faithfulness to the German fatherland. The fraternities’ aim was, “to fight Antisemitism, in awareness of the fact that German Jews were inextricably bound to the German fatherland by history, culture and a community of law, and to be prepared at all times to advocate for the Jews’ political and social equality.”

All of the fraternities in the K.C. followed the traditions of the long established German fraternities. Fencing and duelling were central elements of fraternity life. Accordingly, Erich Hirschberg sported scar on his cheek, received during one of his fencing matches.

Hirschberg left Freiburg before the winter term of 1912 and enrolled in the University of Berlin, only to transfer once more to Munich the following year.

A “Convention” of Fraternities 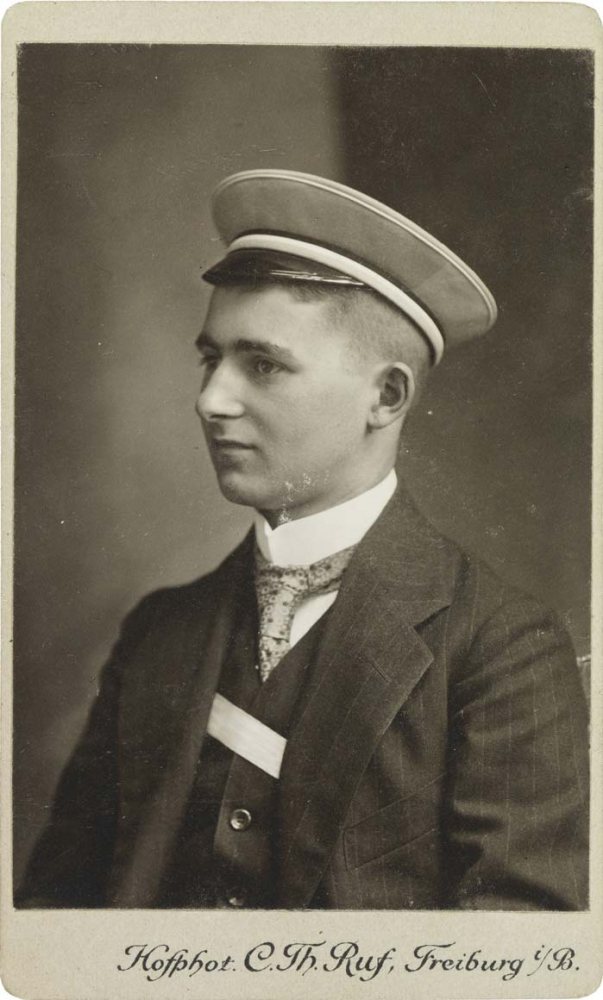 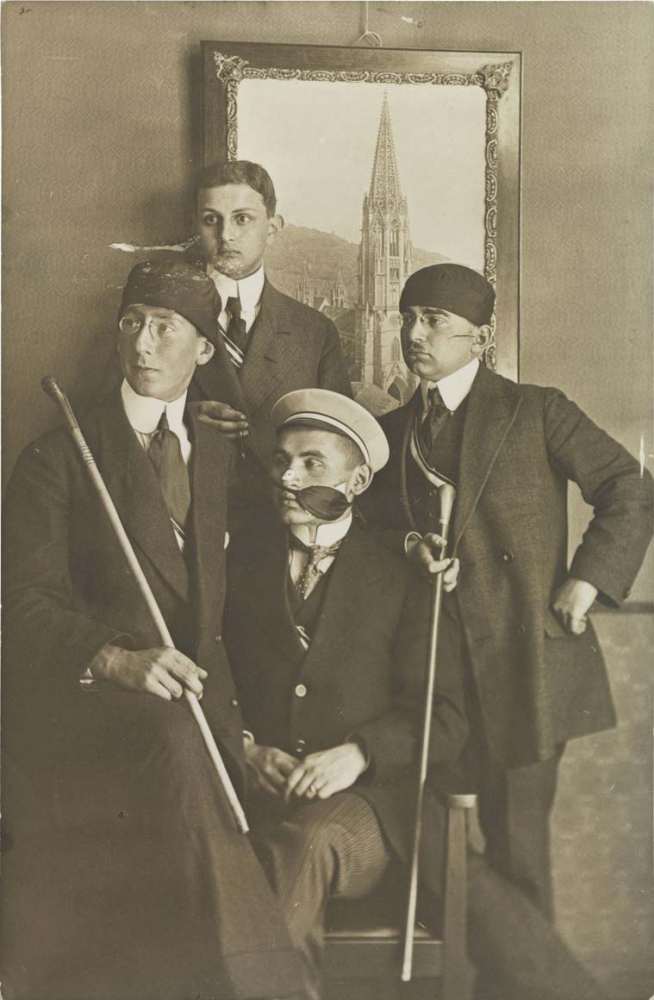 Erich Hirschberg (seated) with students of the Ghibellinia K.C. fraternity after a duel. A bandage over Hirschberg’s cheek protects the fresh wound; about 1912; Jewish Museum Berlin; photo: Jens Ziehe

When the war began, the K.C. immediately declared its willingness to take part, doubtless encouraged by Kaiser Wilhelm II’s solemn proclamation: “I no longer recognize parties, I know only Germans!” The K.C. newspaper from September 1914 proclaimed: “We will joyously go forth for our Fatherland the moment we are summoned.”

We do not know whether Erich Hirschberg was also caught up in the enthusiasm of the beginning of the war. He may have been distracted by a family tragedy: in 1914, his sister Else died suddenly. Erich continued his studies until 1915, when he began military service in a medical company.

Erich Hirschberg was awarded the Iron Cross Second Class and later the Hamburg Hanseatic Cross. He ultimately reached the rank of Field Auxiliary Surgeon in Medical Company 607. During the final year of the war, he was stationed in northern France near the Belgian border.

Erich Hirschberg died on 21 July 1918. The precise circumstances of his death can no longer be reconstructed. The telegram sent to his father the following day referred merely to a “severe illness.” 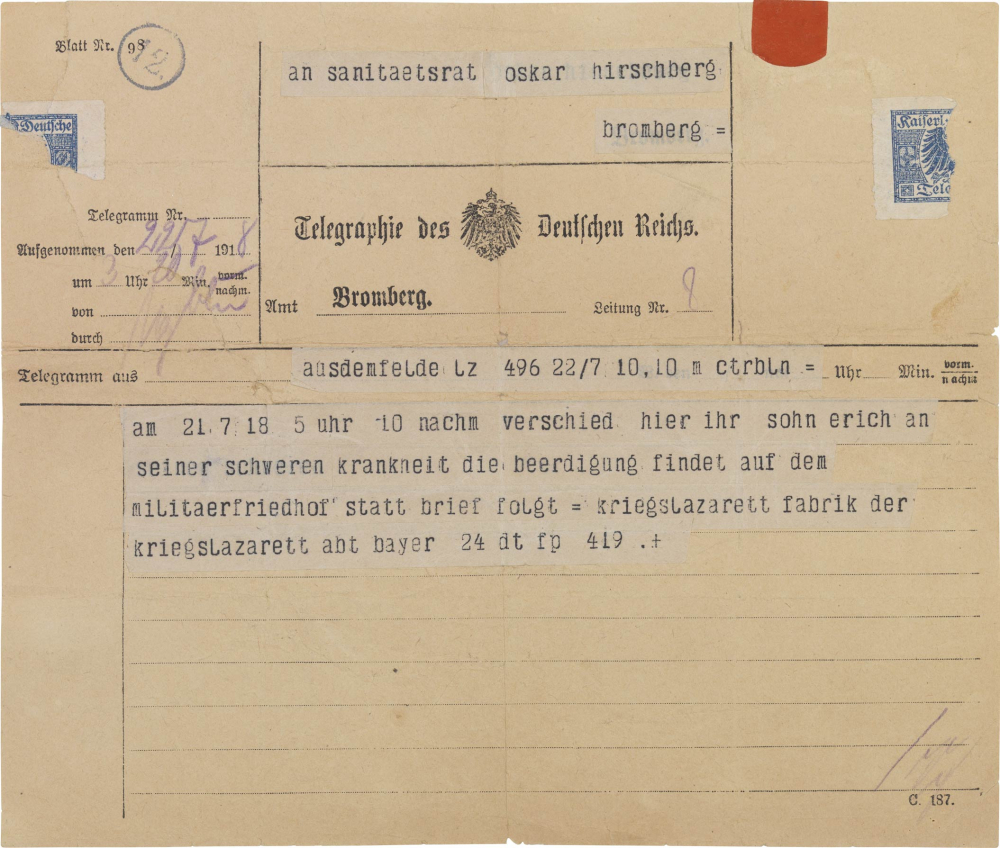 Several days later, his family published a death notice in the Berliner Tageblatt newspaper. It was a heavy blow for Oskar Hirschberg, who had lost both his children in the space of less than four years. 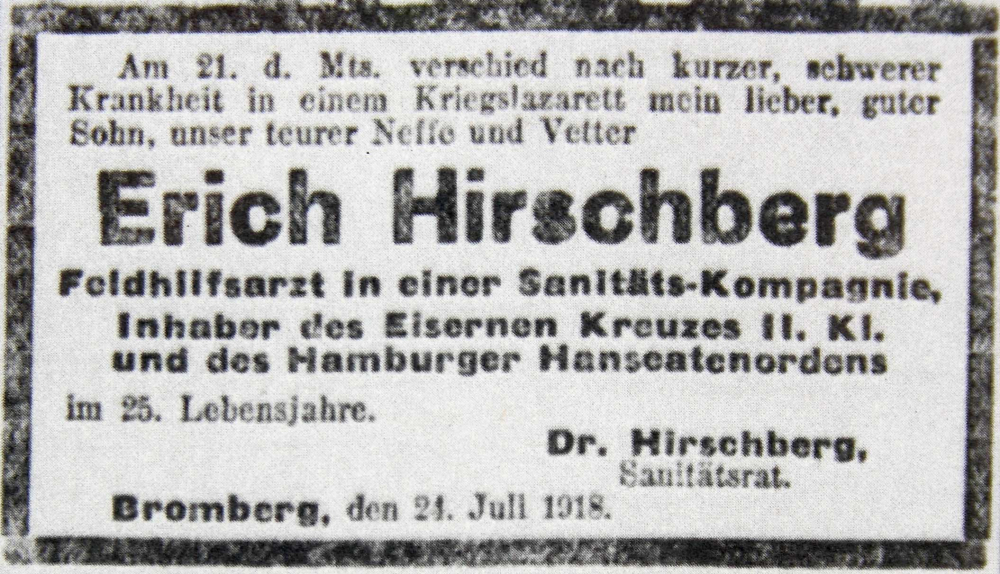 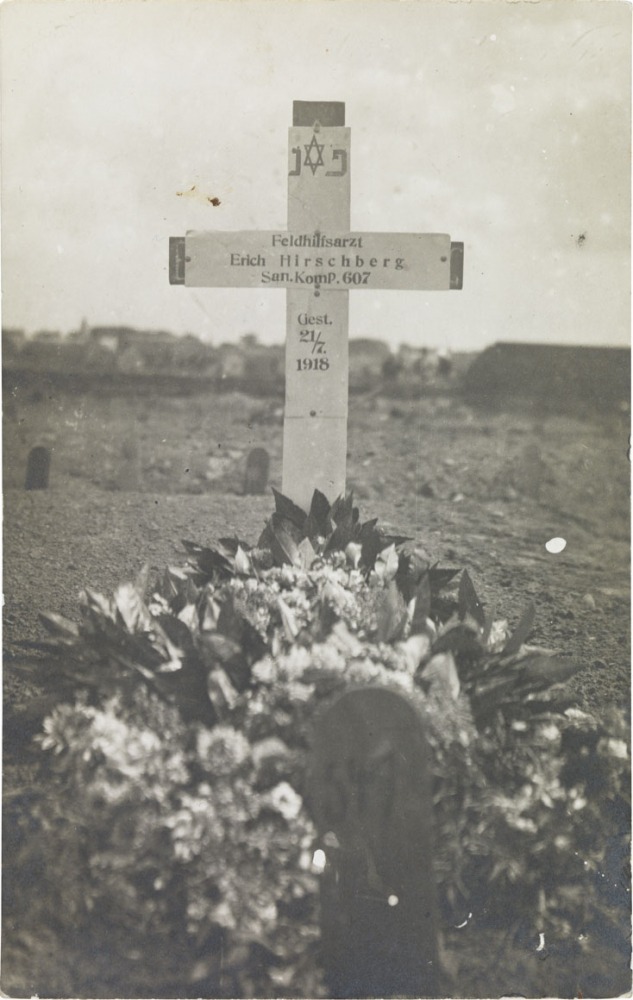 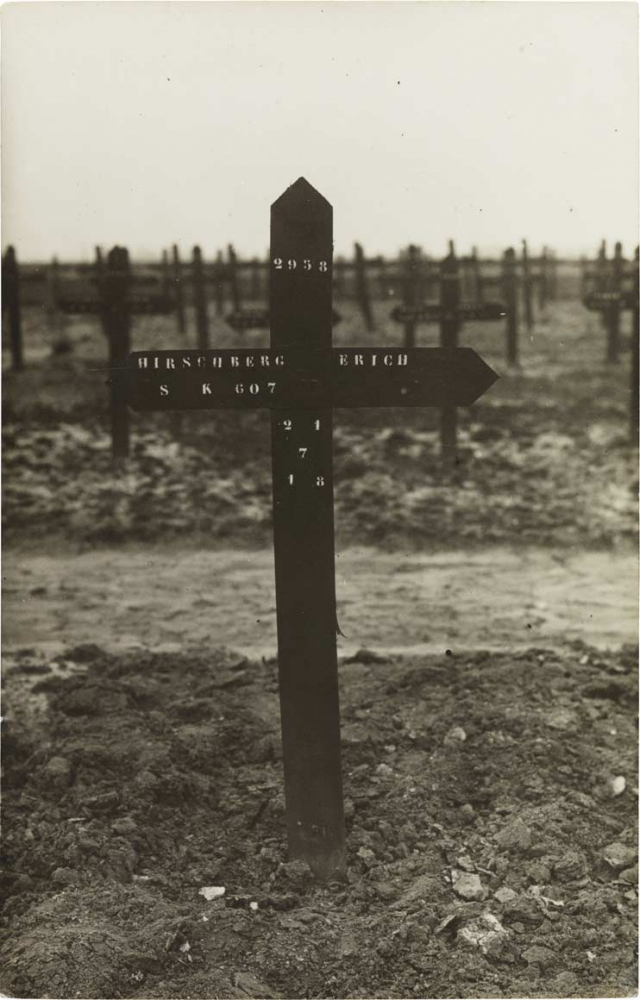 After the war, Oskar Hirschberg left Bromberg. He relocated to Berlin and remarried.

With the help of the German War Grave Commission, he had a wreath placed on his son’s grave on the anniversary of Erich’s death in 1932.

You can find more information on our archival holdings related to the Hirschberg family in our online collections (in German). 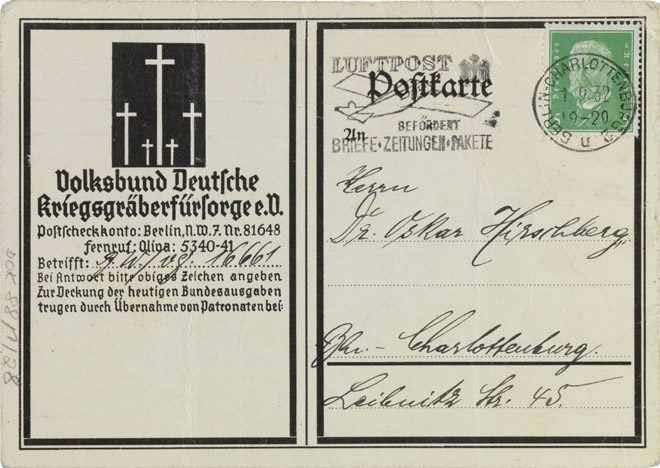 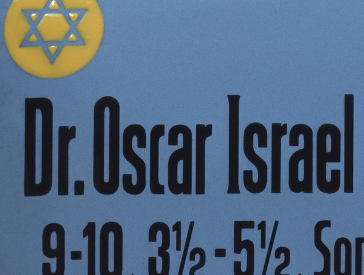 Evidence of ascendancy and antisemitic exclusion