Seventeen-year-old Leo Roos was in Frankfurt am Main when the war broke out in 1914. Originally from the Westphalian village of Brücken, he was training to become a banker in the city.

On 31 July 1914, one day before mobilization, he wrote a letter to his parents and siblings in the excited spirit of the times:

"The decision is near! By the time this letter reaches you it will have been decided! Now then, onward! With God for king and fatherland! It must be!"

But for all his euphoric patriotism, Leo Roos also viewed the coming events with concern. The rush on banks and the panic shopping at grocery stores led him to warn his family to make the necessary provisions: “I mean food and cash (gold if possible).” He wrote that one must be “prepared for anything.” He was consoled by the fact that his “dear father,” who was 47 years old, did not, “thank God, have to go to the front.”

Two and a half years later, in February 1916, Leo Roos was called up to serve. He thus had to give up his position at the Frankfurt bank Baruch Strauss, where he had been working as an assistant since the spring of 1915.

Because he had completed the mid-level exams at the secondary school in Kaiserslautern, Roos was eligible for the so-called “one-year service.” He could become a reserve officer and hence joined Regiment 18 of the Reserve Foot Artillery in Mainz as a “one-year sergeant.”

This photo of Loos and his comrades was taken during basic training. He sent it to his family, remarking that it was “unflattering.” 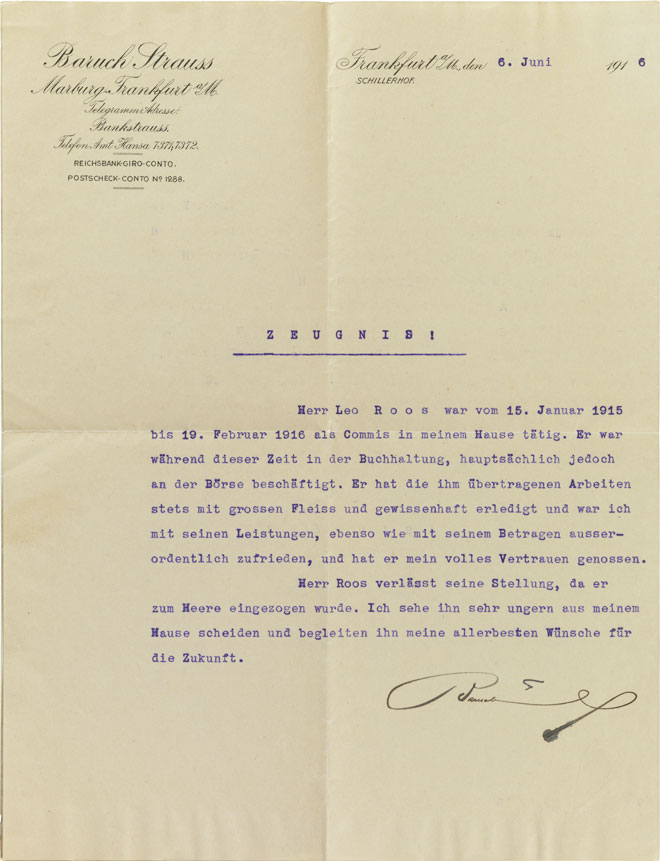 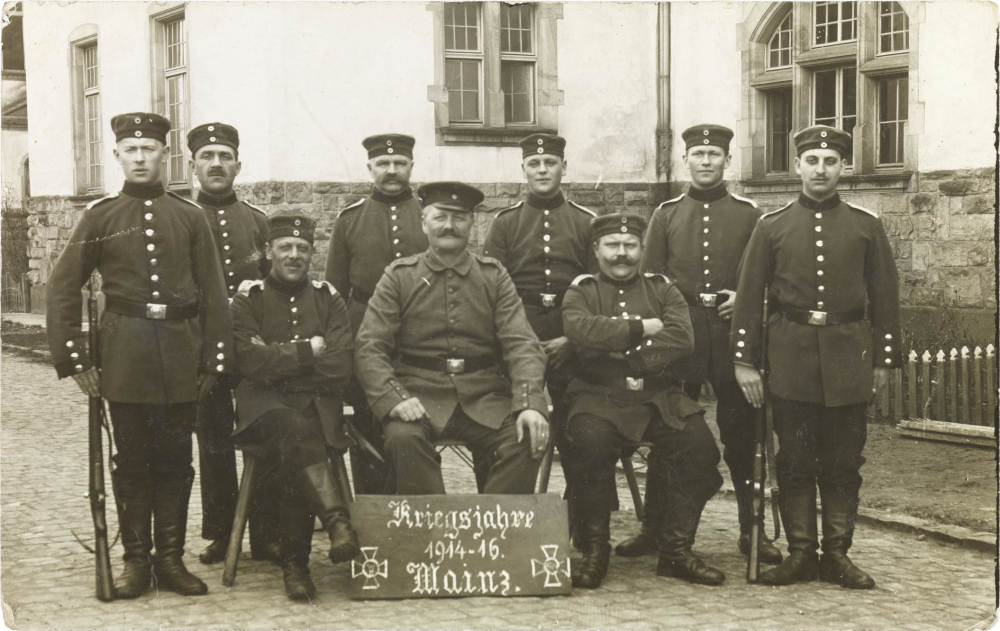 News from the Front

Leo Roos fought on the Western Front. A dozen of the letters and postcards he sent to his family have been preserved. He also had intermittent contact with his younger brother Julius, who also served as a soldier.

The letters provide a bit of information about where he was deployed during the war. For instance, in May 1916 he was near in the town of Longuyon in Lorraine, which had been destroyed by the war, and in the spring of 1917 he fought in battles in Flanders.

On Rosh ha-Shanah, the Jewish New Year (which fell in early September in 1917), Leo Roos and his fellow soldiers were in transit. They were heading to Roeselare, a town in West Flanders, in order to take a short rest.

On Yom Kippur, the most important Jewish holiday, Roos went to synagogue in Ghent. For the Day of Atonement, Rabbi Dr. Georg Wilde held a sermon for the soldiers. Roos fasted until the afternoon, but broke his fast before returning to Roeselare in order to gain strength. In contrast to the want suffered on the front, there was an abundance of food to be had in Ghent. 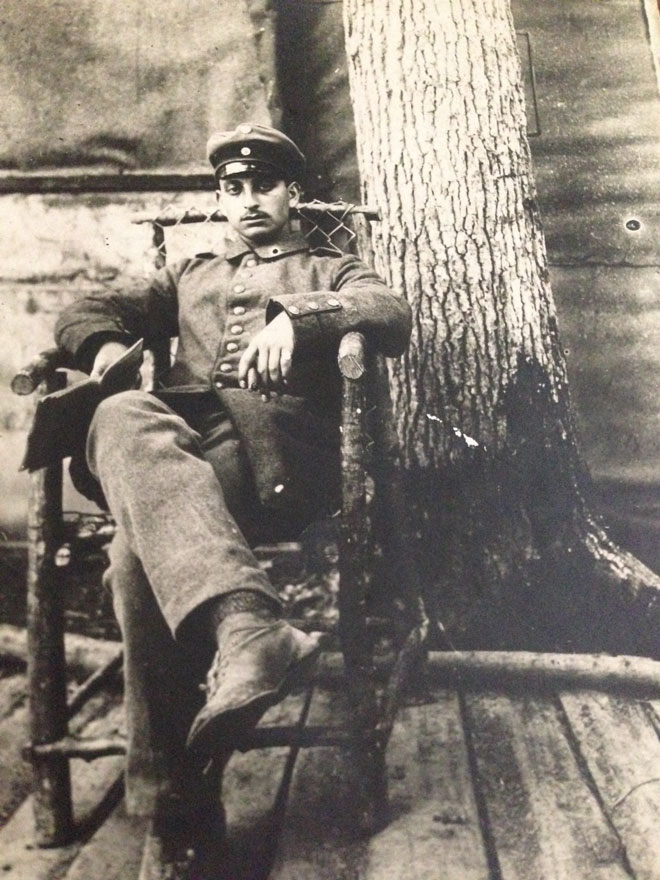 Letters to His Parents 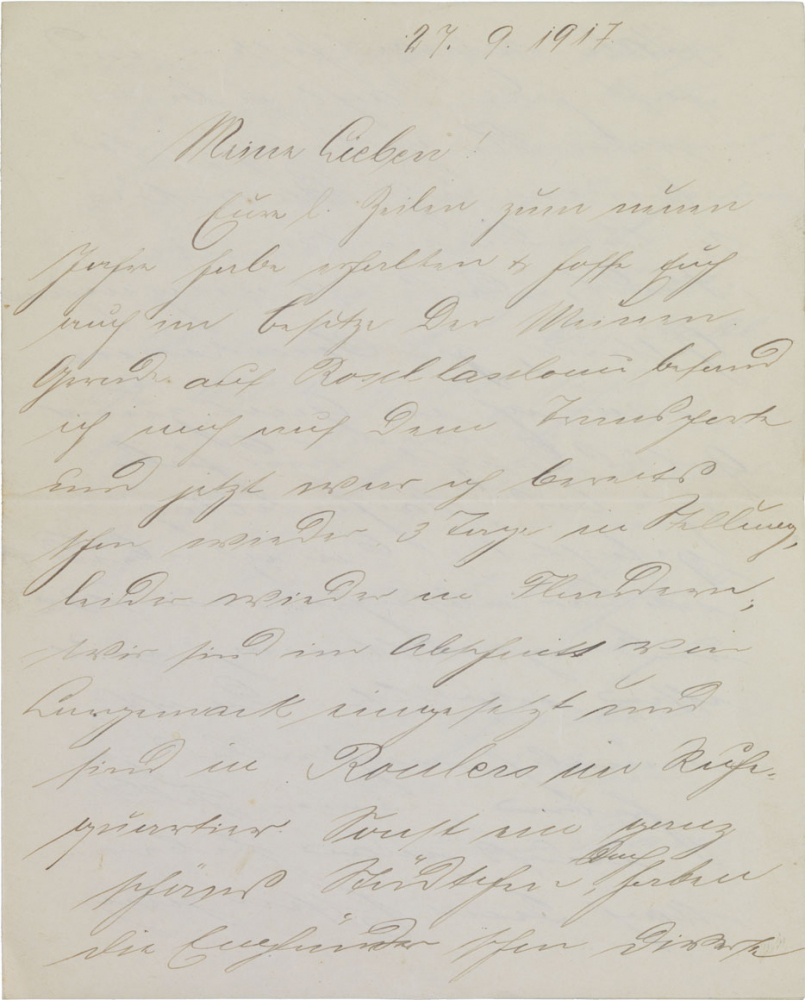 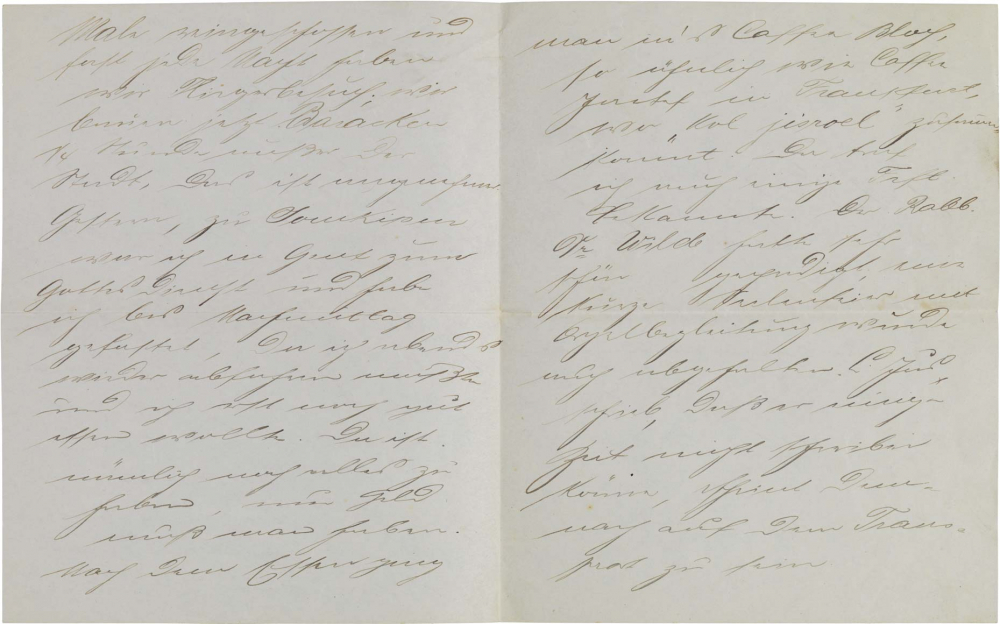 Letter sent from the front by Leo Roos to his parents (pages 2 and 3), Flanders, 27 September 1917. He writes: “Yesterday, on Yom Kippur, I was in Ghent for a service at the synagogue and fasted until the afternoon because I had to leave in the evening and wanted to eat well beforehand. There you can get anything, you just have to have money. After eating we went to Café Bloch, similar to Café Jontef in Frankfurt, where Kol Israel meets. There were also a few Frft [Frankfurt] friends there. Rabbi Dr. Wilde gave a nice sermon, and there was a short prayer service with organ accompaniment. Dear Jus [Julius] wrote that he would not be able to write for some time, thus he seems to be in transit. I hope that you also enjoyed the holiday.” Jewish Museum Berlin, gift of Walter Roos, photo: Jens Ziehe 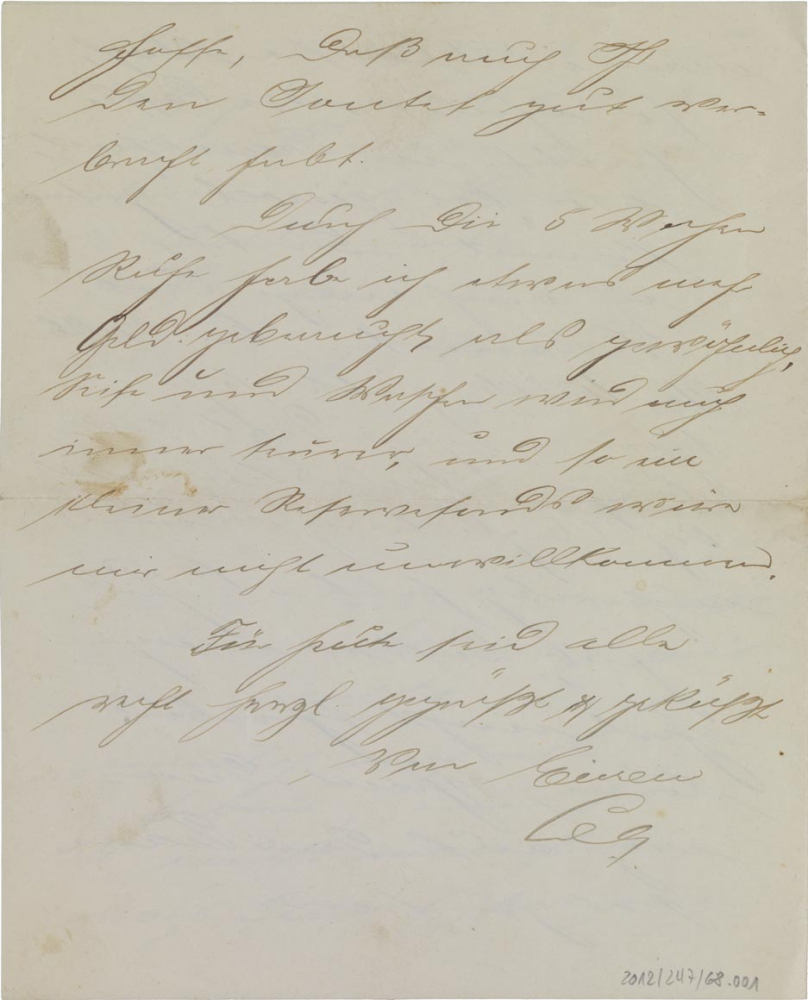 The 21-year-old last wrote to his family on 9 October 1917. In a brief postcard, he informed his parents that he was “in good health, thank God.” With that, he had communicated what was most important.

He was buried in the soldier’s cemetery in the Belgian town of Beveren. The unit’s captain notified his parents in Brücken and sent them his condolences. 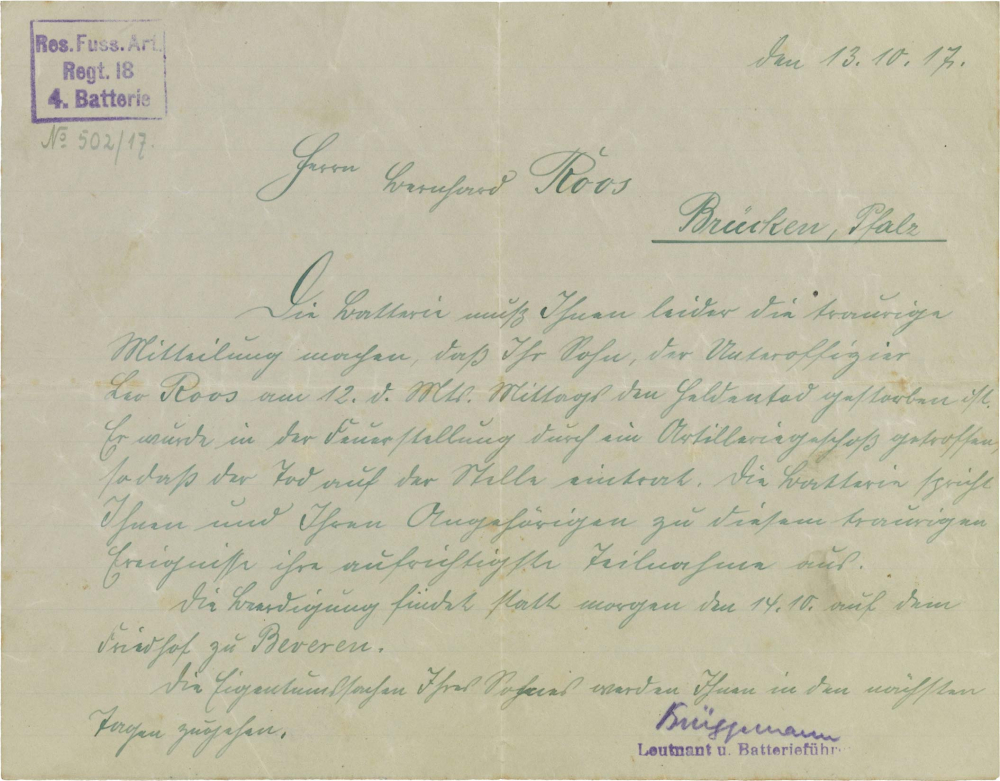 As fate would have it, Leo’s brother Julius was also in West Flanders and went to visit his brother on 15 October, unaware of his death. There was no joyful reunion. Upon arrival, he was told that his brother had been killed three days earlier.

Julius Roos visited his brother’s grave. Still in shock, he wrote a long letter to his family that evening, communicating his pain.

"That was a bitter, painful trip. Dear parents, may God console you, I know that we all loved him dearly, he was very close to me, our beloved Leo!…Dear Mama and dear Papa, don’t fret too much, it is terribly difficult and it hurts very badly. Stay healthy and remain certain that I am well."

Julius assured them that they need not be concerned about him, as his company was “not being deployed.” 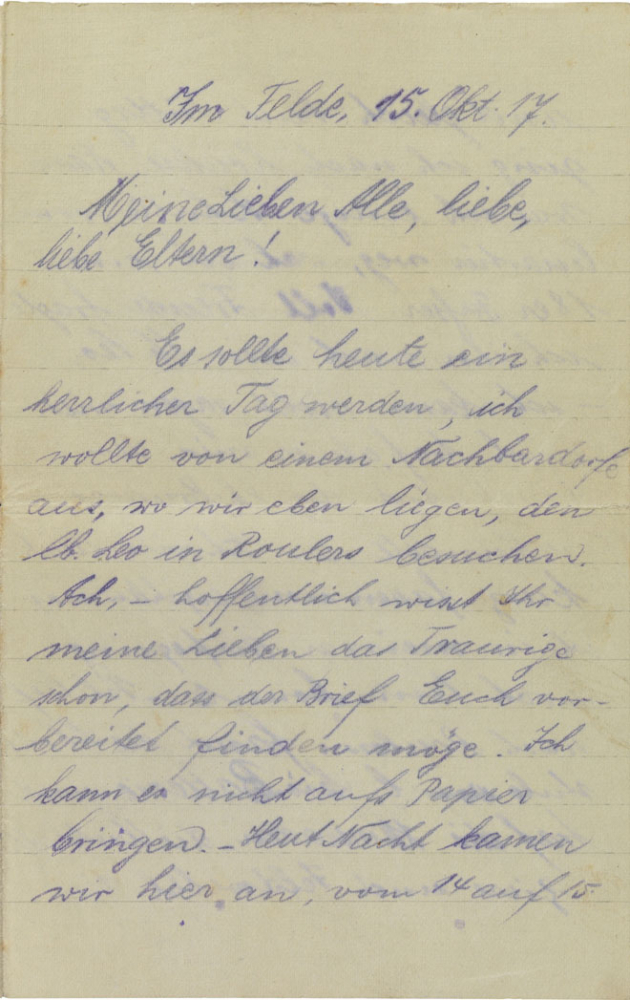 Roos’s parents received many condolence letters expressing the high regard that friends and relatives felt for the fallen young man. His former employer in Frankfurt, Baruch Strauss, also sent his condolences.

The wife of a former teacher wrote:

"What a great loss! A wonderfully talented, noble, beautiful man full of character has left us."

To this day, there is a commemorative plaque memorializing Leo Roos at the Jewish Cemetery in Steinbach am Glan, where other members of the Roos family are buried.

More documents and photographs related to Leo Roos can be found in our online collection (in German). 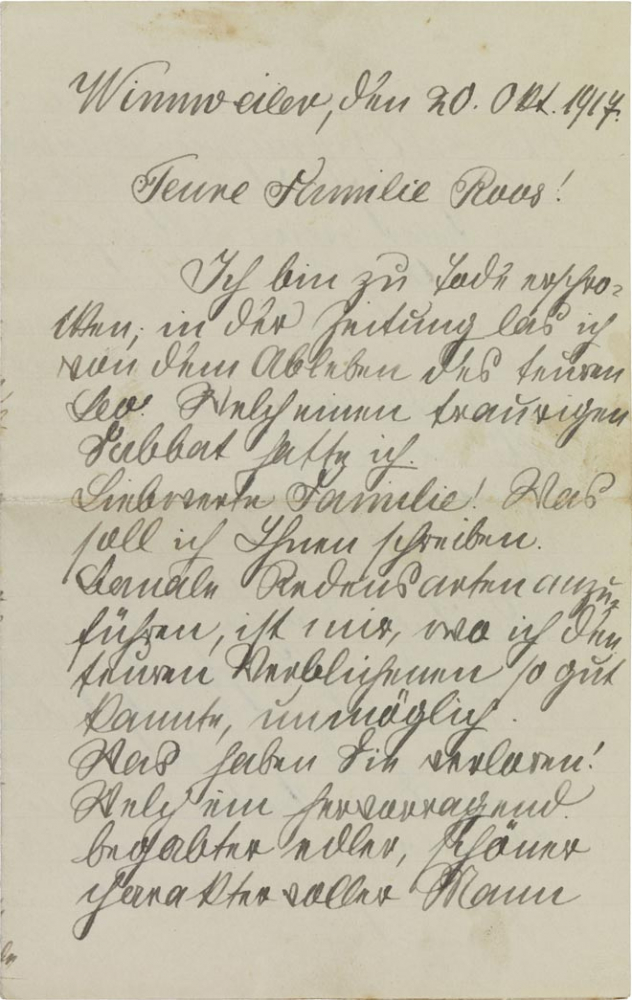