Written by Captain Georg Meyer in his diary on 29 October 1916, this short sentence symbolizes the indignation and pain felt by German-Jewish soldiers in the fall of 1916, and with them the country’s entire Jewish population.

The cause was the Judenzählung or “Jewish Census,” that was decreed by the Prussian Ministry of War on 11 October 1916.

The Ministry justified its order on the basis of rumors that Jews were not fulfilling their military duties and were shirking deployment at the front.

"This comes after two years of total dedication to our homeland. In times of peace I would leave, but now I really must endure." 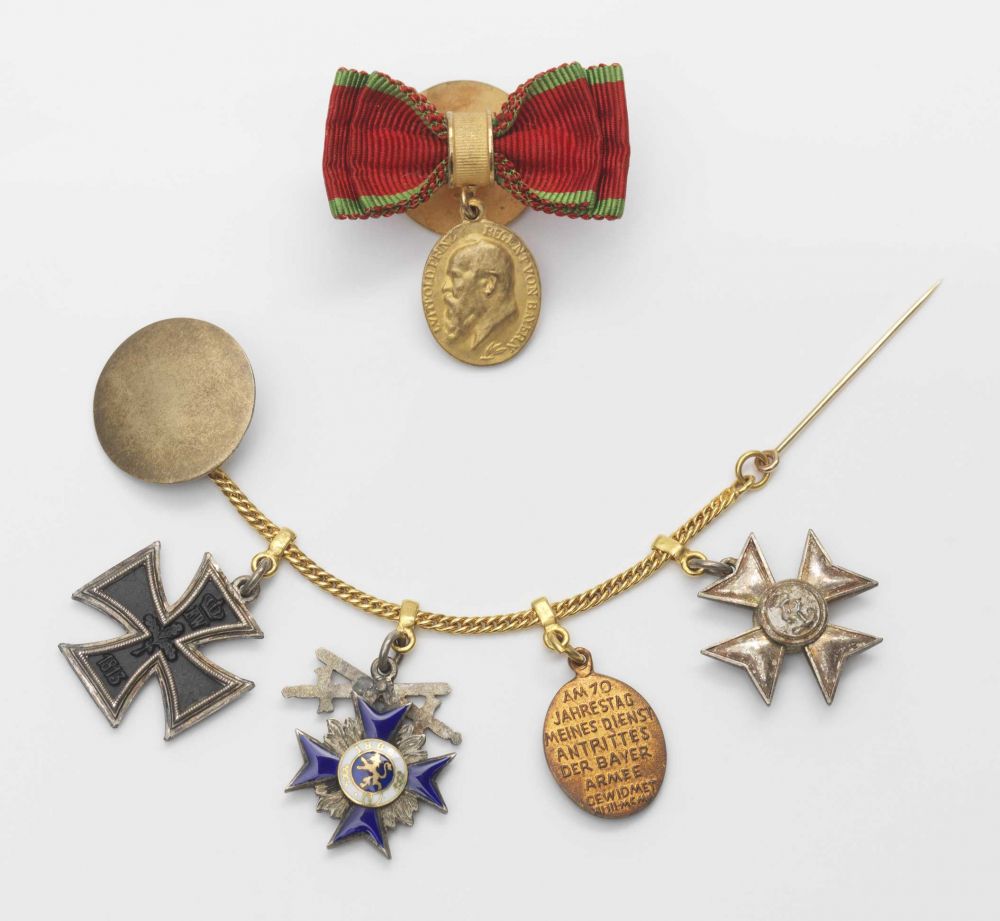 Coat chain with Georg Meyer’s medals in miniature, above them the Prince Regent Luitpold Medal 1905 in gold. Along with this medal, Georg Meyer was also awarded the Iron Cross Second Class, the Bavarian Military Service Medal Fourth Class, and the Bavarian Medal for 20 Years of Military Service; Jewish Museum Berlin, gift of Georgina Meyer-Düllmann and Ronaldo Meyer; photo: Jens Ziehe

Love of the Fatherland

Two years earlier, Georg Meyer had gone to war with great enthusiasm, spurred by a feeling of duty that was for him self-evident.

Only a few weeks after the war began, he had been promoted to captain – one of the highest ranks open to Jews in the German military – and was awarded the Iron Cross Second Class. Meyer felt “at one with our great fatherland.”

Son of a Rabbi

Georg Meyer was born on 9 May 1873 in Hanover to the Chief Rabbi Samuel Meyer and his wife Lina, née Sieskind, the youngest of 13 offspring. His father died when Georg was nine years old.

After graduating and completing a brief banker’s apprenticeship, Meyer studied mechanical engineering in Karlsruhe and in Strasbourg, where he completed his doctoral studies in 1895. Afterwards, he began his “one-year volunteer service” in Würzburg with the Second Field Artillery Regiment of the Bavarian Army. 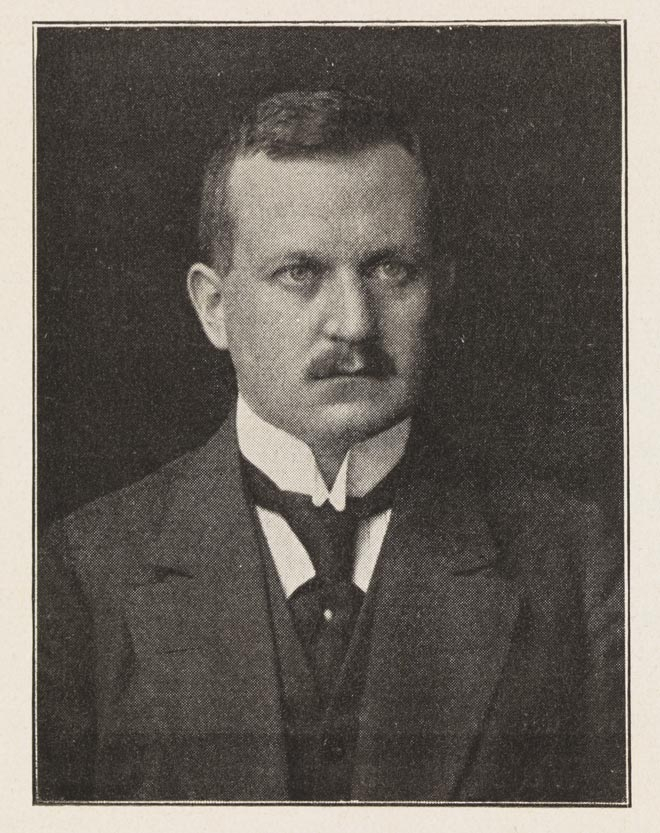 Upon completion of a two-semester internship at the Charlottenburg Royal Technical School, he started working at the MAN engineering works in Berlin. In September 1900 Meyer took on a position as a design engineer with Siemens & Halske, and in 1903 with Siemens-Schuckert, where he worked on electric motors. He was promoted to senior engineer and authorized representative.

Meyer maintained his ties to the military. He regularly took part in reserve training and was promoted multiple times: to deputy sergeant, lieutenant, and senior lieutenant.

On 2 August 1914, right at the beginning of the First World War, the 41-year-old joined the Eighth Field Artillery Regiment of the Bavarian Army, which was led by Prince Heinrich of Prussia, a brother of Kaiser Wilhelm II. 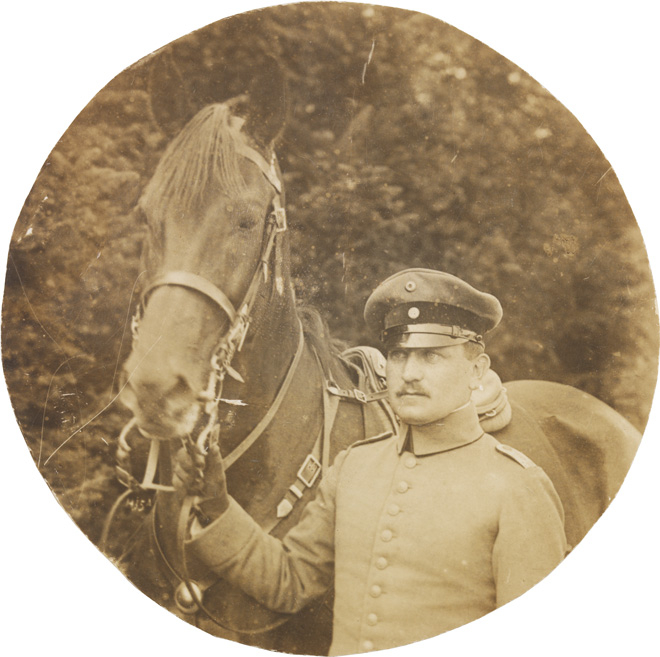 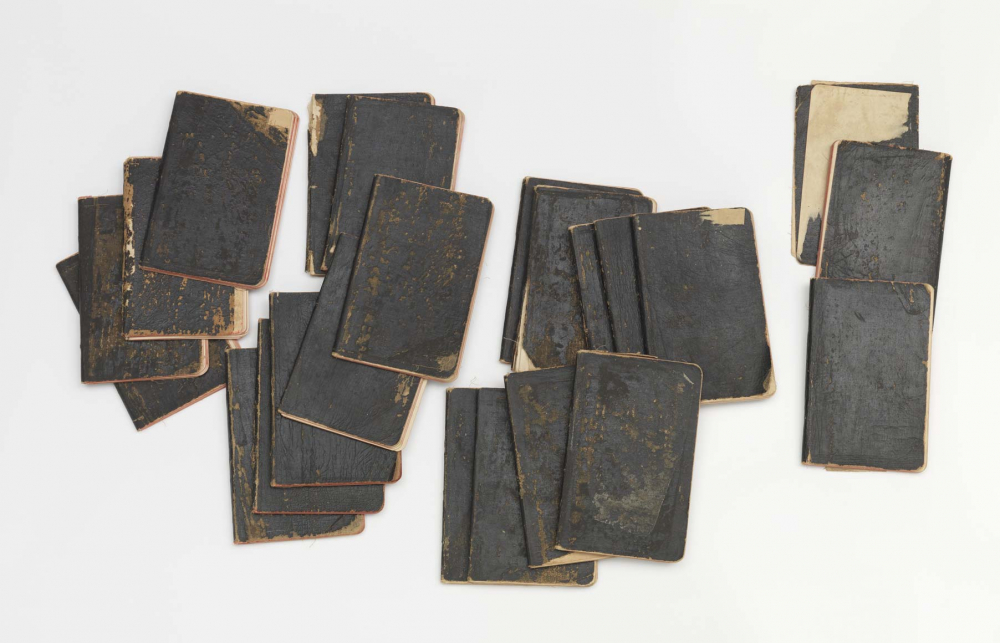 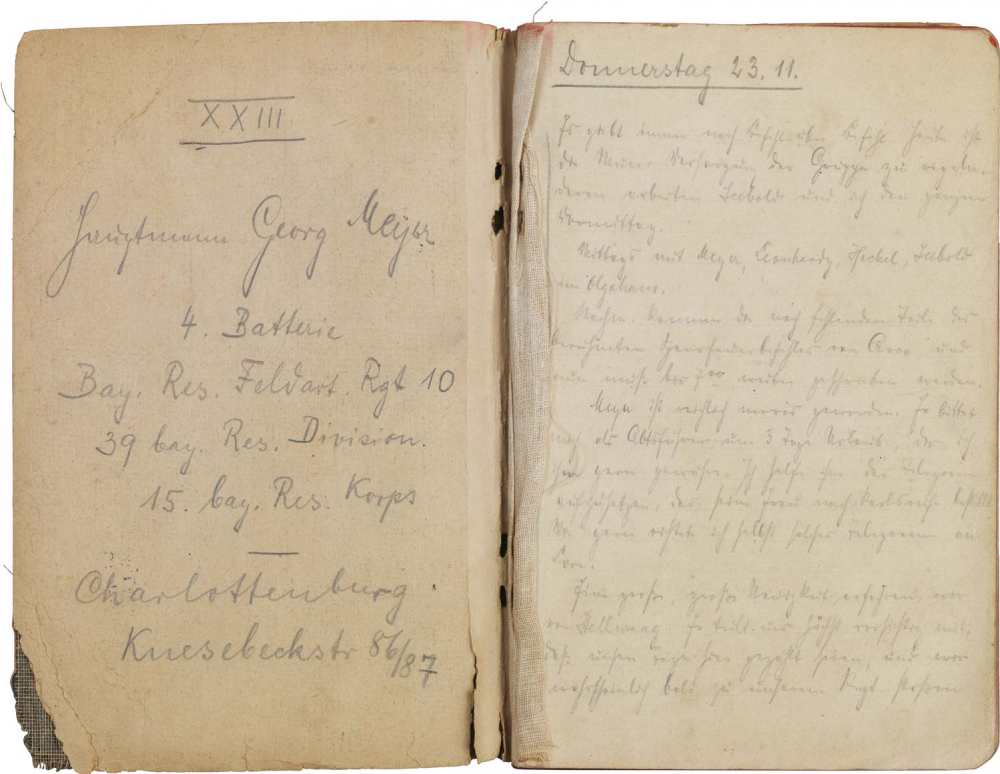 Meyer immediately started keeping a diary. He wrote almost daily about the military situation of his unit, his discussions with superiors and officers, and his own feelings. Over the 28 months of his service he filled 23 notebooks, which constitute a unique source on the experiences of a German Jew in the First World War. 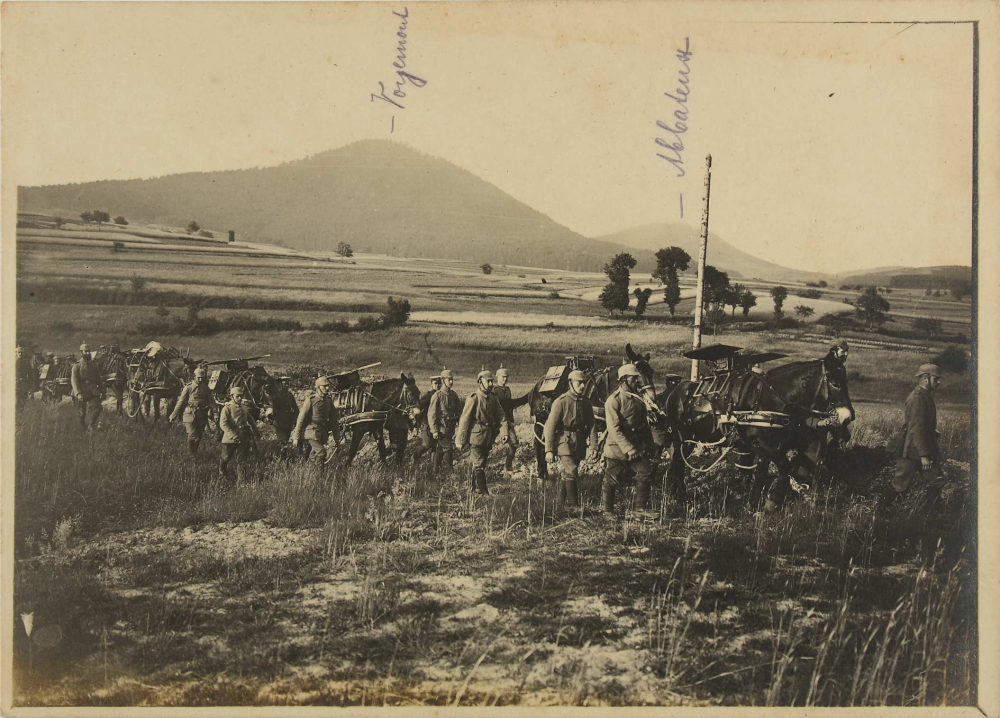 In mid-August, Georg Meyer went to the front as the commander of the First Reserve Division. Before the end of the year, the battalion had fought in battles near Nancy-Épinal and in the Vosges.

In July 1915, the battalion was restructured and became part of the Fourth Battery of the Reserve Field Artillery Regiment 10. Beginning in November, Meyer commanded his troops while they engaged in continual stationary fighting near Verdun.

The mandated “Jewish Census” weighed heavily on the captain. On 8 November 1916 he wrote that he was “in a leaden mood.” However, “following the ‘Jewish Census’” he felt there was no way he could find an opportunity to have himself ordered back to Siemens-Schuckert in order to undertake work essential to the war effort.

Nevertheless, some two weeks later he asked the company if “he could be of use as the head of the new cannon factory,” though he doubted that he would be allowed to go. “I am caught between two stools and feel very, very uncomfortable.”

After the “Slap in the Face” the Iron Cross First Class

On 14 December 1916 Georg Meyer received the news from his division commander that he had been awarded the Iron Cross First Class on the previous day. 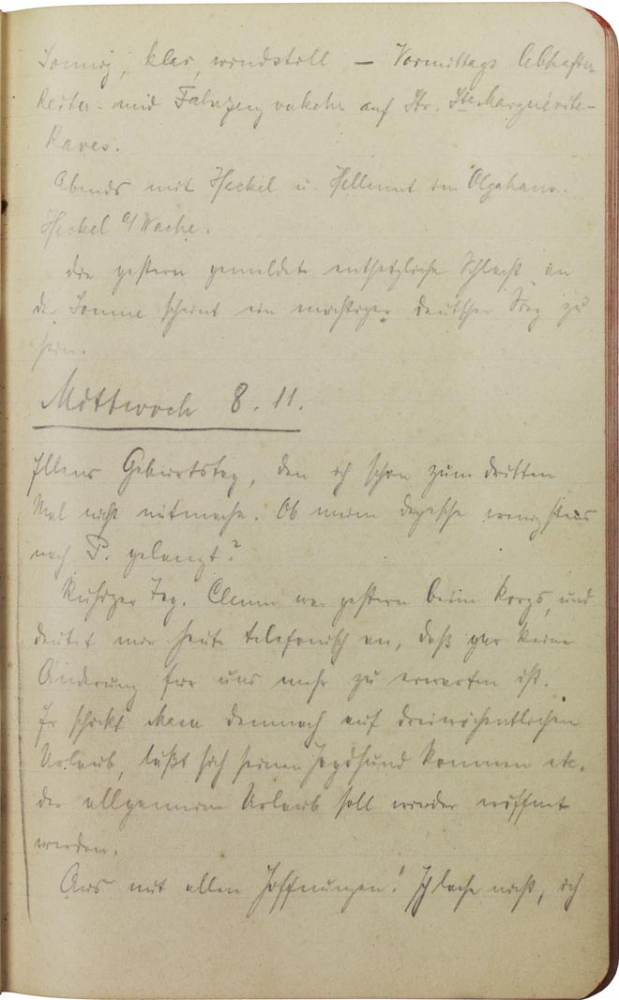 In his diary he noted that his joy was “not as great as with the EK 2 [Iron Cross Second Class].” He had his battery to thank for the medal and would be pleased to be able to display with his wife at his side. And for his son Klaus Ulrich, born in 1912, he thought it would be “the most important memory of me and my aspirations! God willing!” 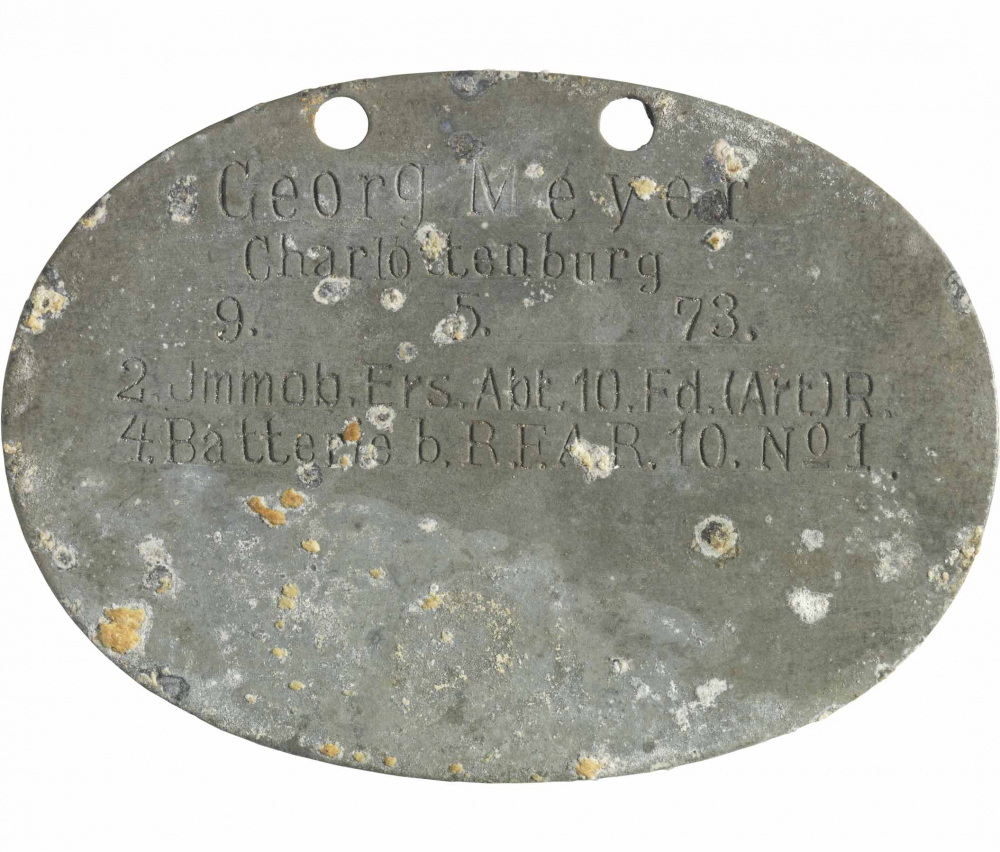 On the next day, Georg Meyer was killed by an artillery shell. 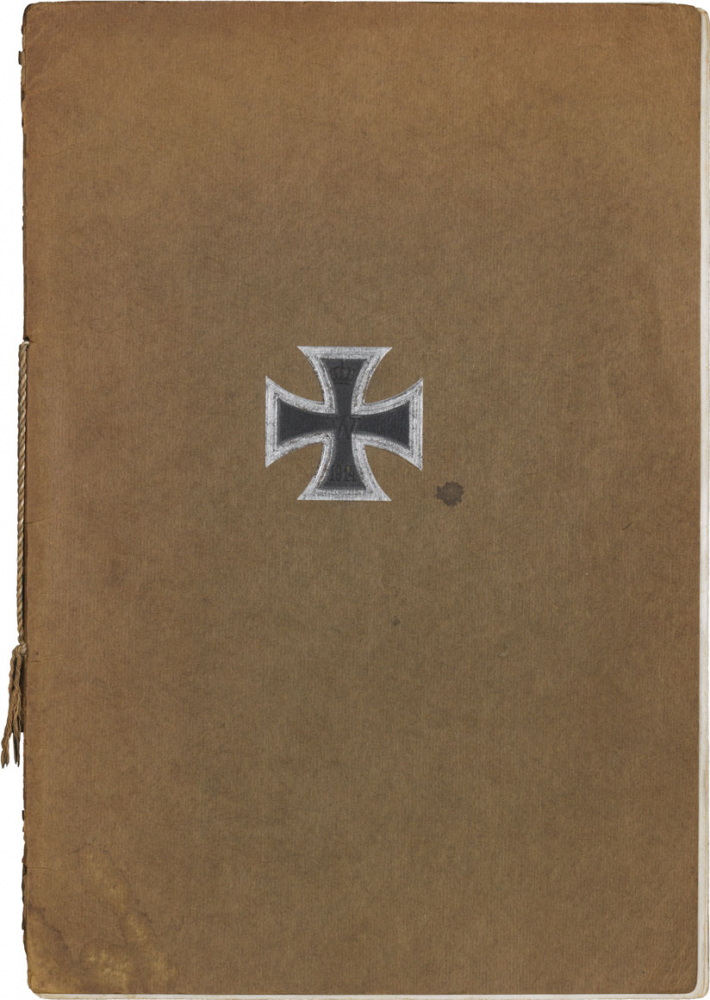 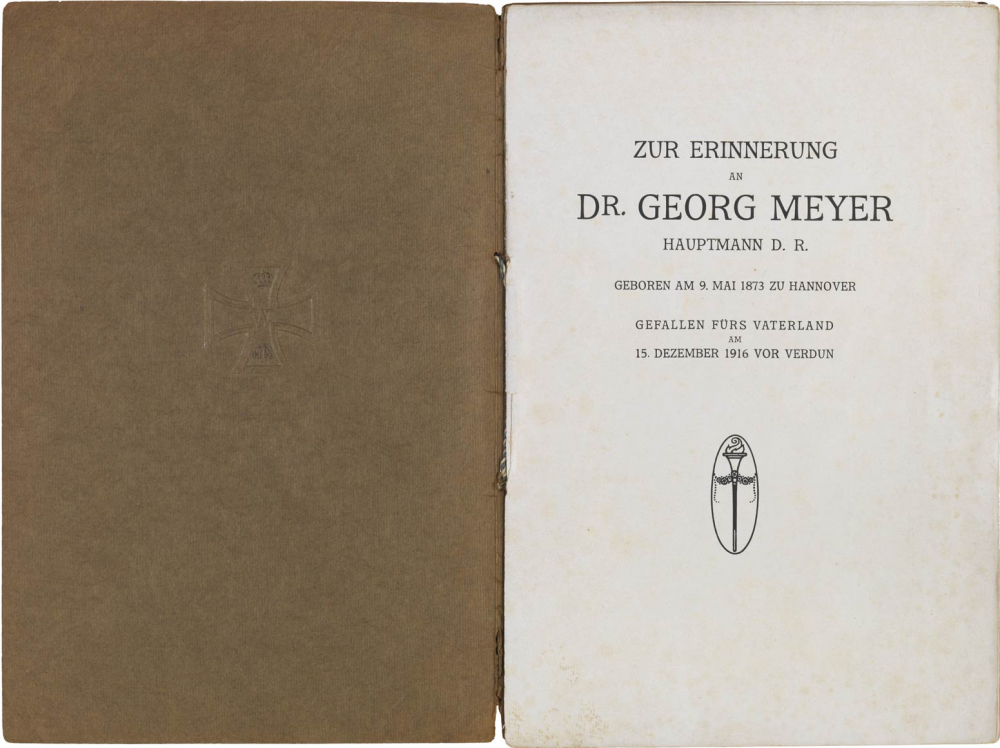 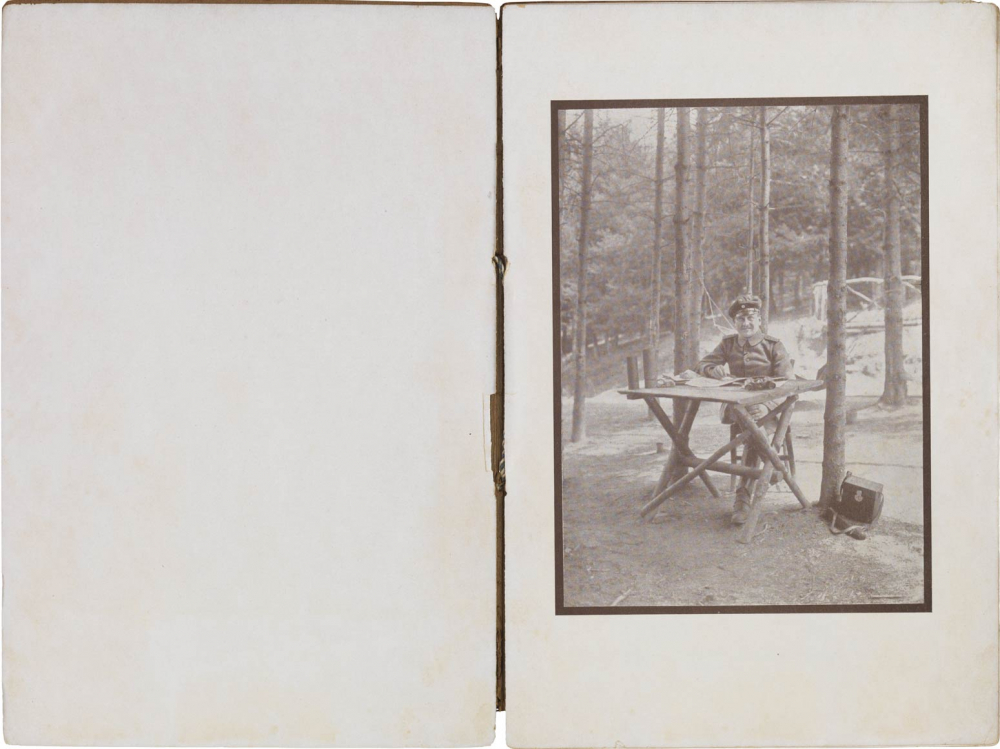 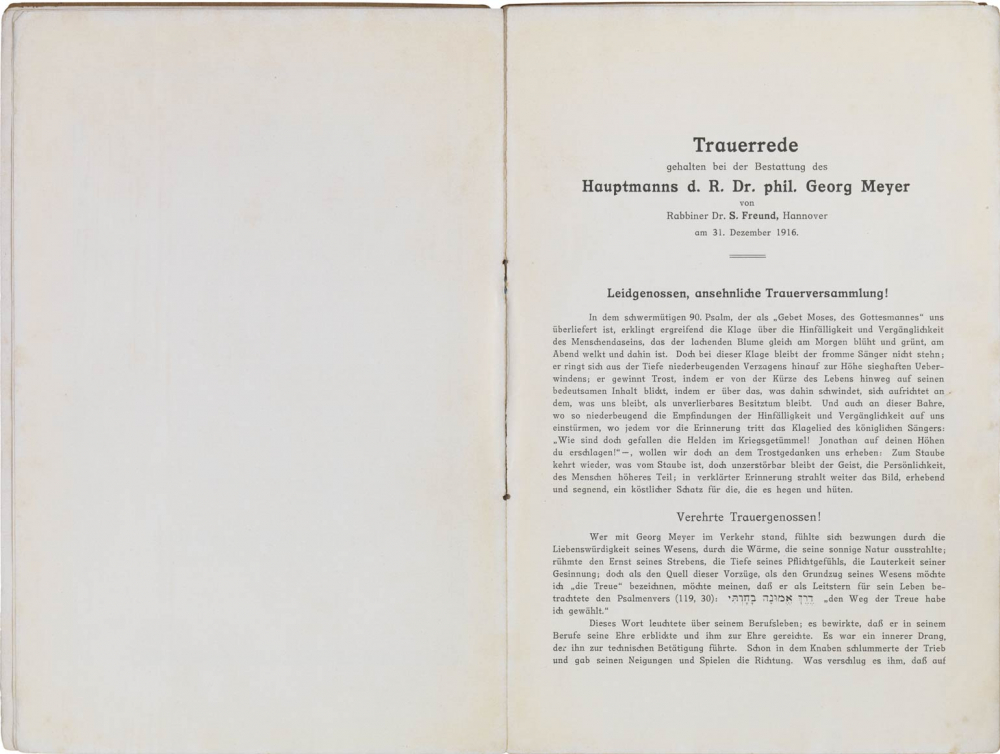 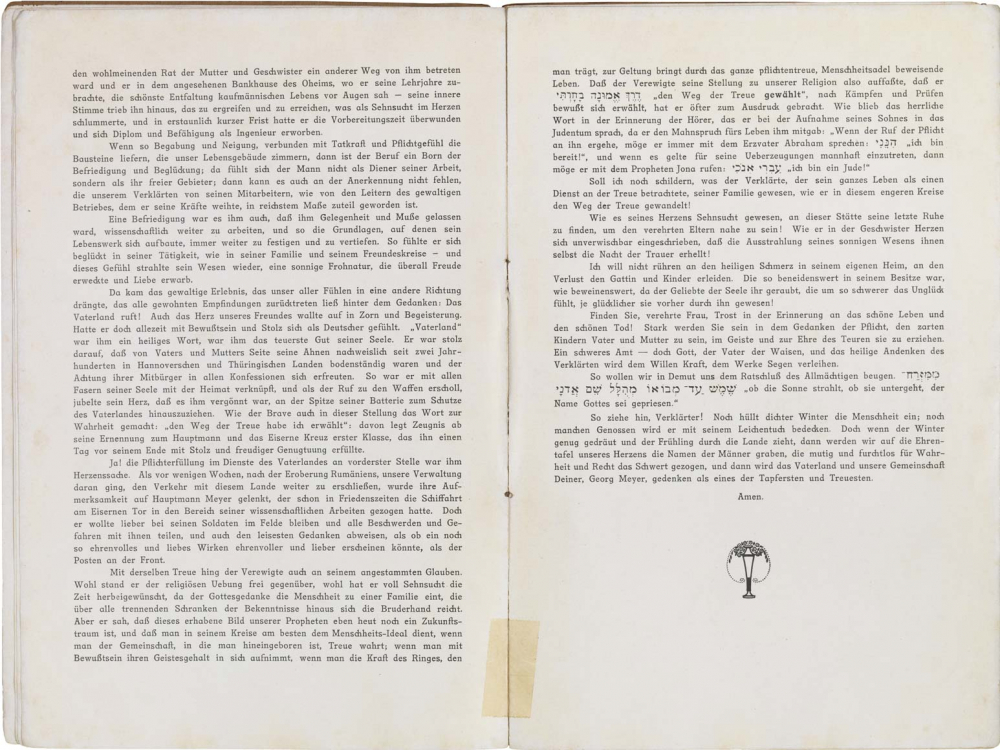 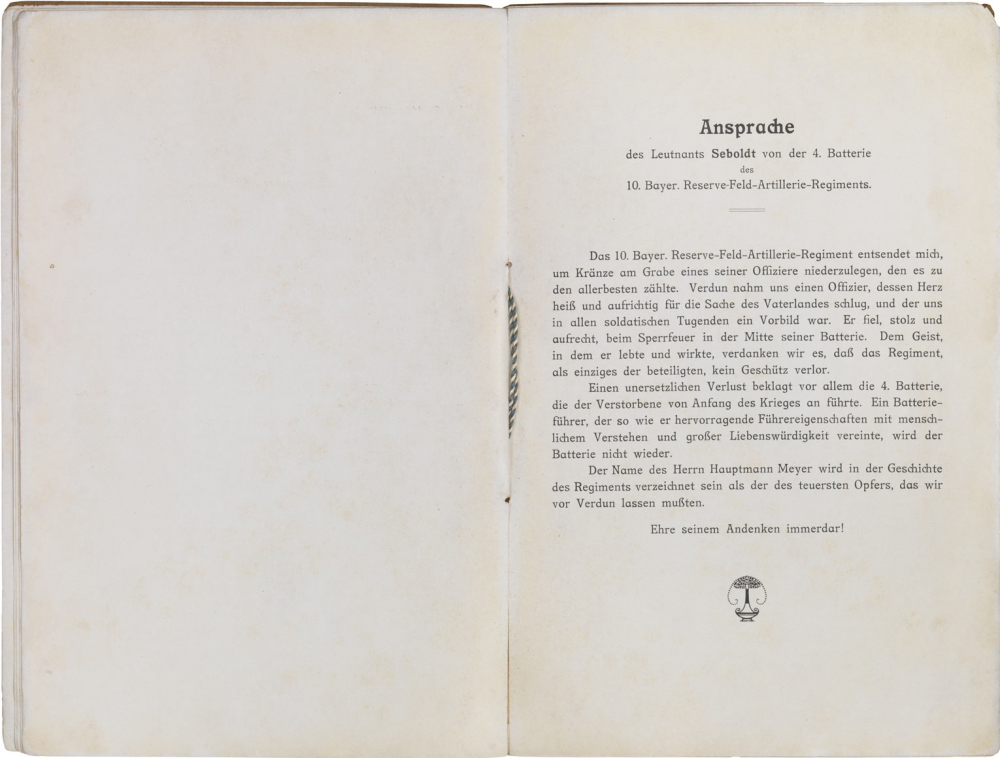 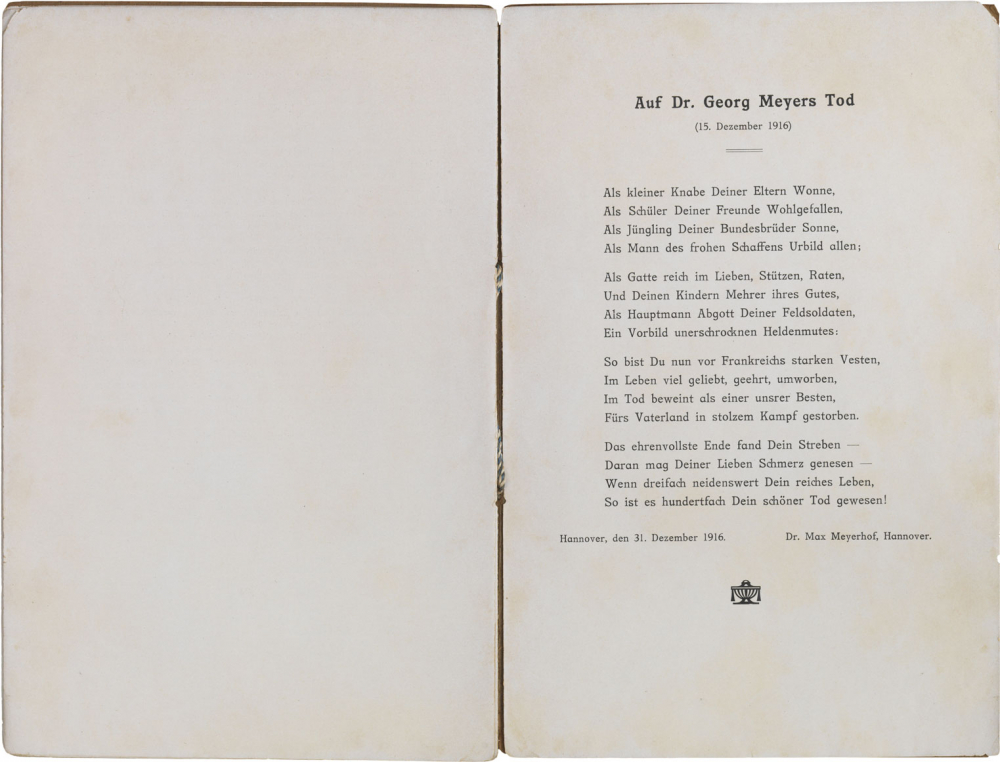 Georg Meyer’s body was brought to Hanover and interred in the Jewish Cemetery next to his father’s grave on 31 December 1916.

In his funeral speech, Rabbi Samuel Freund told those gathered that Psalm 119:30 was the guiding principle of Georg Meyer’s life: “derekh emuna baharti,” in English: “I have chosen the way of faithfulness.” He underscored Meyer’s bonds to his family, occupation, and nation. He also emphasized his fidelity “to his ancestral faith,” even if he did not lead a religiously observant life.

Rabbi Freund quoted words that Meyer had spoken at the circumcision of his son, words that succinctly expressed his convictions:

“If the call of duty reaches his ears, may he always speak with the patriarch Abraham: hineni – ‘Here I am!’ and if he must stand up for his convictions like a man, then may he speak with the prophet Jonas: ivri anokhi – ‘I am a Hebrew.’” 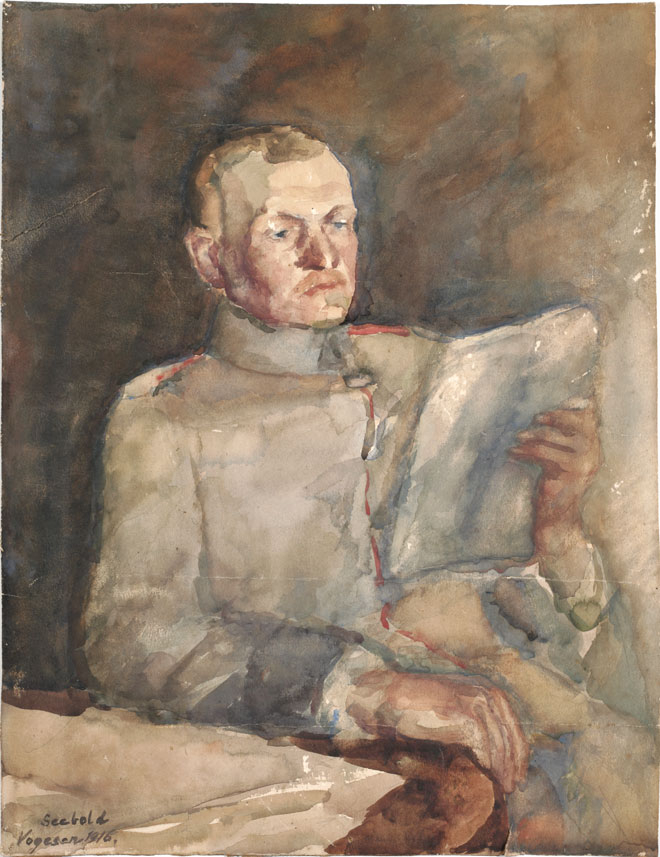 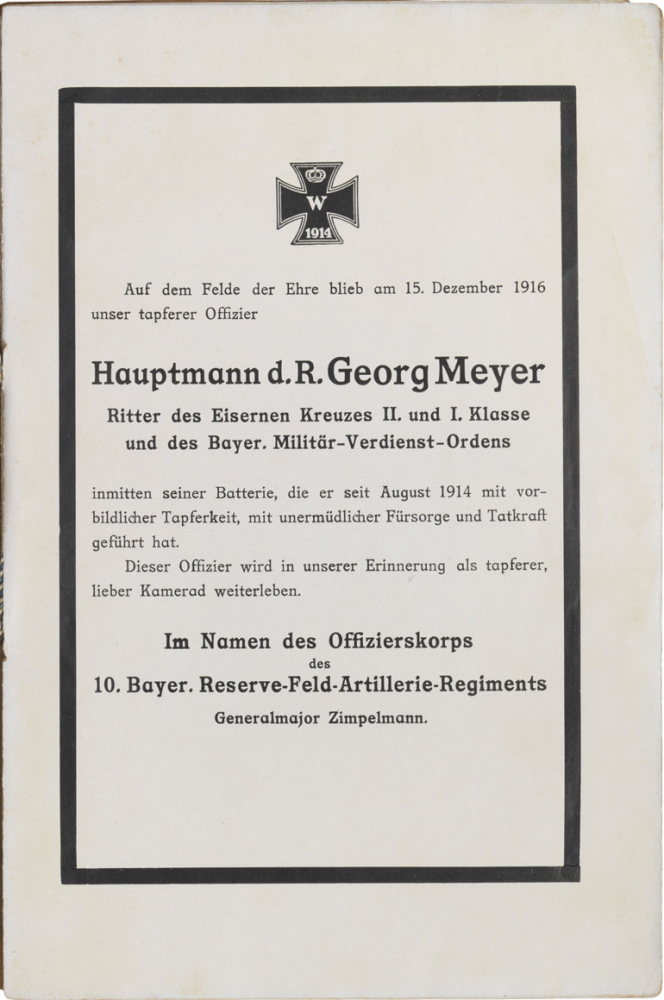 A lieutenant of the Tenth Bavarian Reserve Field Artillery Regiment also spoke at the funeral and certified that the deceased was a man “whose heart beat warm and upright for the cause of the fatherland, and who was a role model of every soldierly virtue.” 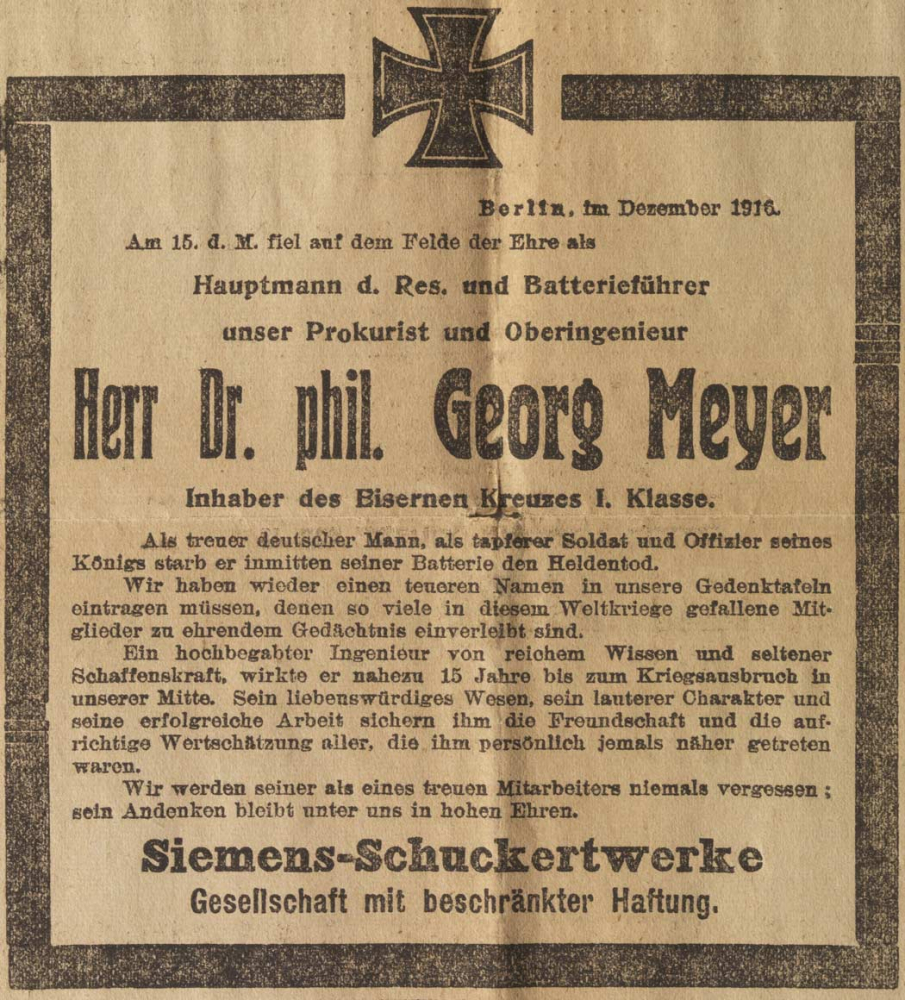 A few weeks later, Siemens-Schuckert honored the professional and scientific achievements of their employee in their Kriegsmitteilungen [War Report]. An obituary composed by the director Wilhelm Philippi appeared in the newspaper Stahl und Eisen [Steel and Iron] and in the Elektrotechnische Zeitschrift [Electronics News].

Anger about the “Jewish Census,” which called Jewish soldiers’ fulfilment of duty and patriotism into question, continued to have a strong effect on Georg Meyer’s family after his death.

His brother, counselor of justice and senator Dr. Siegmund Meyer, protested in a letter to the head of the Center Party’s parliamentary group. The party’s faction in the Reichstag had petitioned that Jewish personnel working in the civilian war economy also be included in the statistics. Siegmund Meyer also forwarded his letter to Minister of War von Stein, expressing himself in no vague terms: “Two of my sons, eight nephews, and many cousins, ranging in rank from cavalry captain to private, are at the front. Like all Jewish soldiers, they are suffering under the measures targeting confession and experience these as a personal, defaming slight.” He added that Jews throughout the nation “are enraged and upset like me.”

Meyer also wrote to General Field Marshal von Hindenburg. Repeating the Ministry of War’s argument, Hindenburg replied that the census was not aimed against Jews, but was undertaken “in order to combat unjustified attacks against Jewry.”

The government never published the results of the census and thus failed to counter accusations of censorship from antisemitic circles.

Only after the end of the war were reliable numbers made public – they showed that, proportional to population, just as many German Jews had fought on the front as non-Jews.

More documents, photographs, and objects related to Georg Meyer can be found in our online collection (in German). 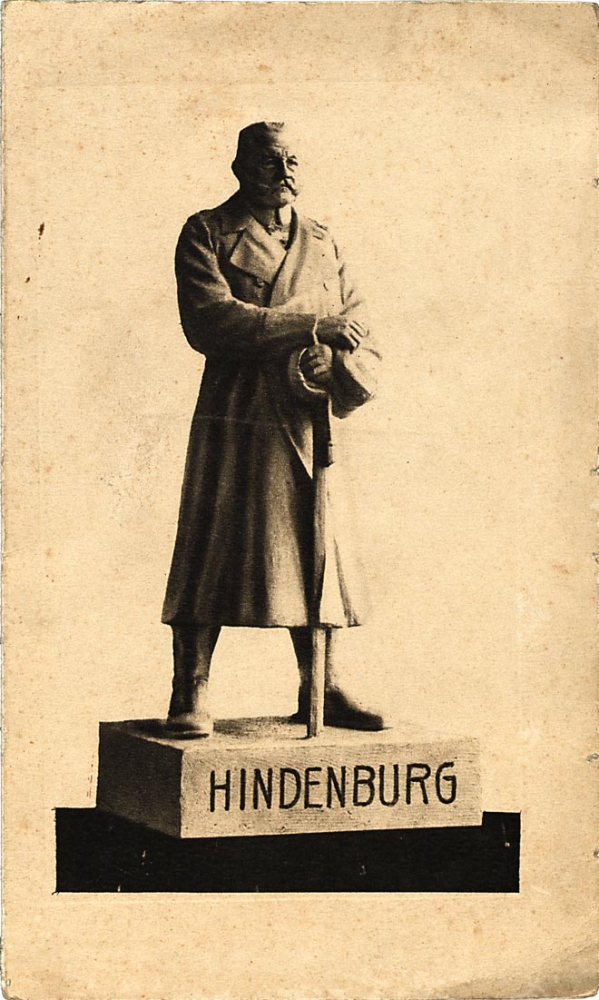