One of the largest and most devastating battles of the First World War was the 1916 Battle of Verdun in northeastern France, where German and French armies faced off in ten months of relentless and indecisive trench warfare.

By the end, the battle had claimed the lives of 167,000 French soldiers and 150,000 German soldiers, with hundreds of thousands more wounded.

One of the soldiers in those trenches was 19-year-old Landsturm recruit Siegfried Schlomer.

According to the records from the military hospital of the Montmédy Army Corps, his left knee was injured so severely by grenade shrapnel that his leg had to be amputated.

The injury proved to be a fatal one. Just three weeks later, at 5.30 am on 7 June 1916, Siegfried Schlomer died of its complications. He was buried in an individual grave at the military cemetery in Montmédy.

Patients' Record of the Military Hospital 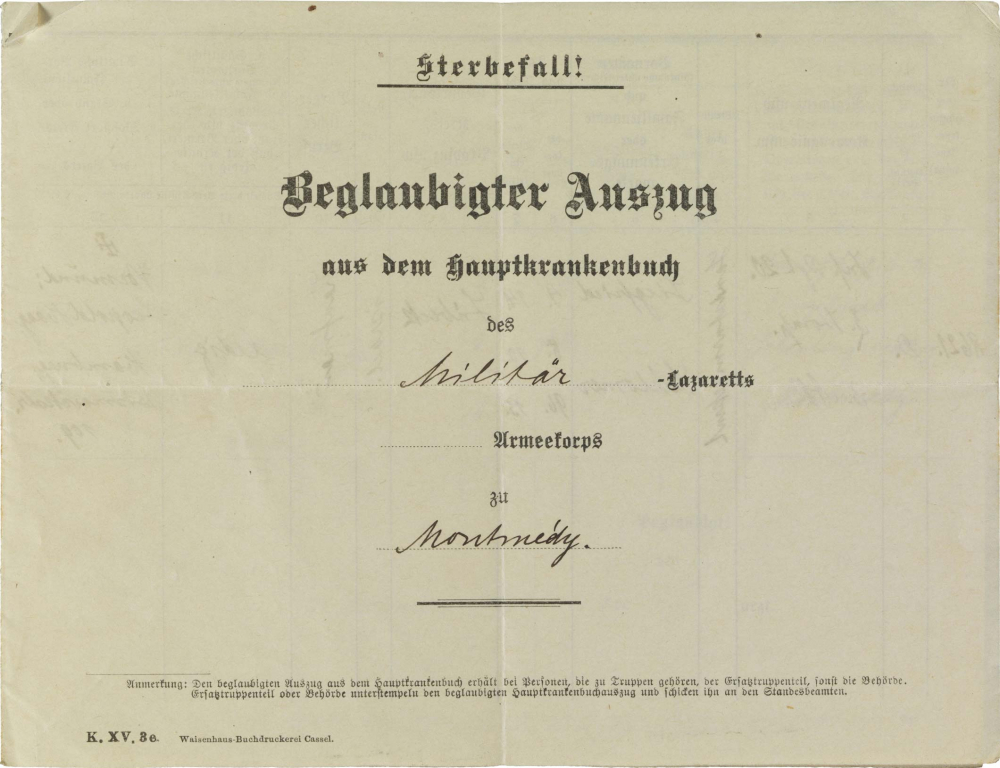 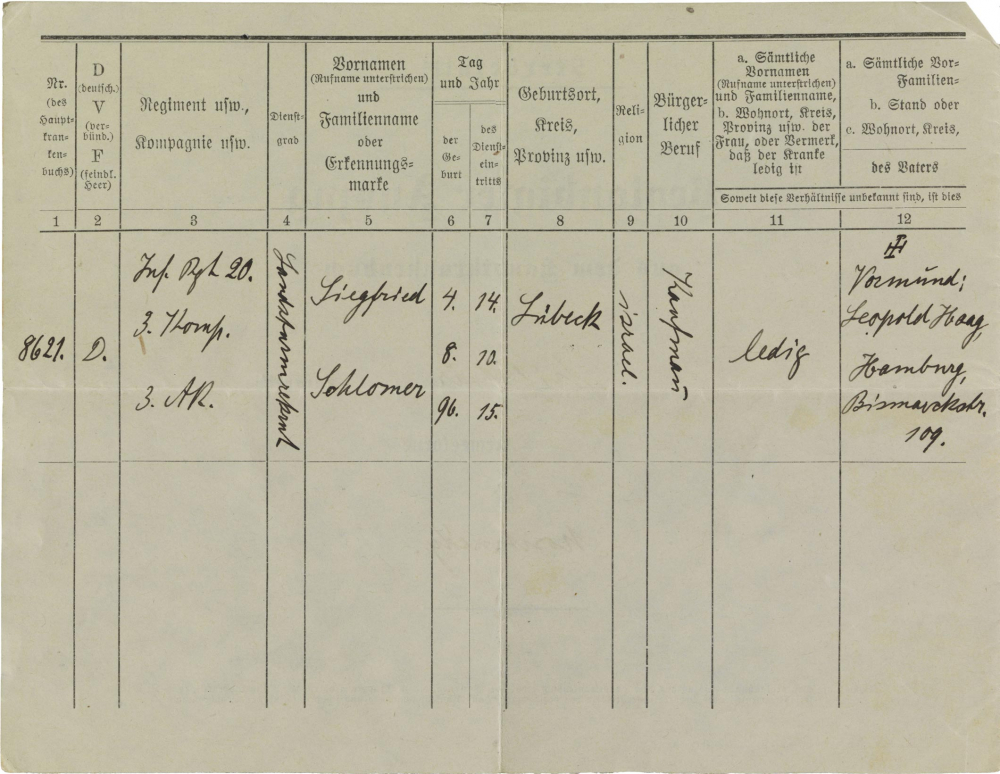 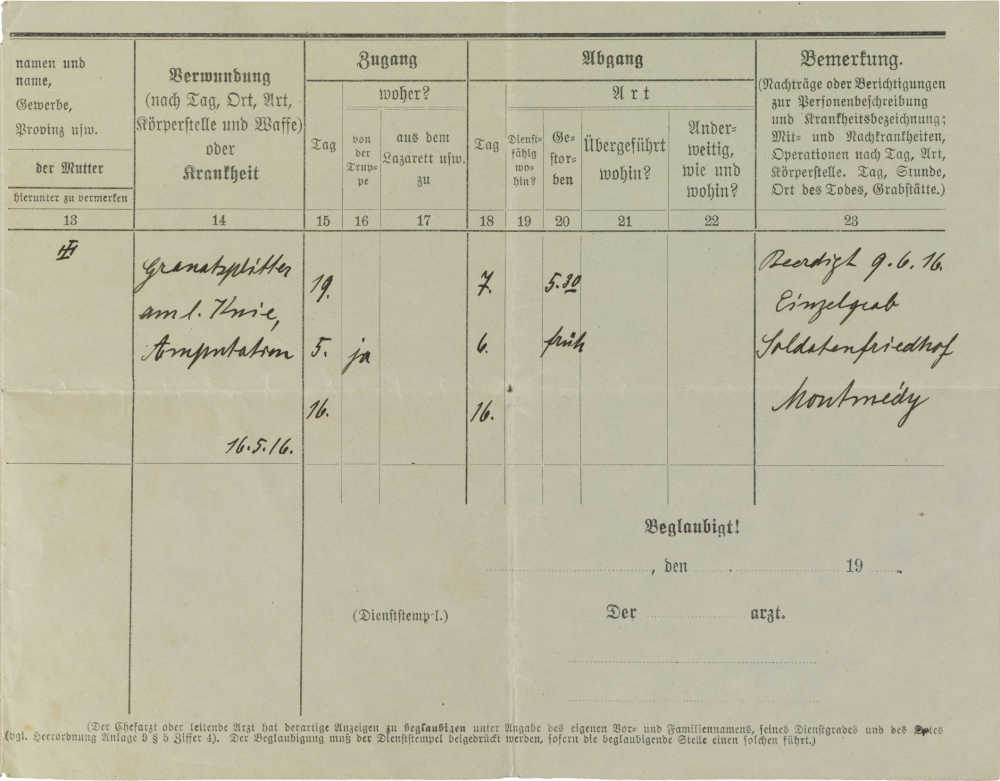 The city of Potsdam, his last place of residence, received notification from the First Reserve Battalion of Infantry Regiment No. 20 in Wittenberg that Private Schlomer, a merchant by trade, had fallen in Verdun. The Potsdam Office of Birth, Marriage, and Death Records issued the death certificate accordingly.

Siegfried Schlomer's life left behind little evidence of his life.

A group photograph of young soldiers in uniform has survived, but there is no way to determine which of the twenty-four men pictured is Schlomer. We therefore do not know what he looked like. 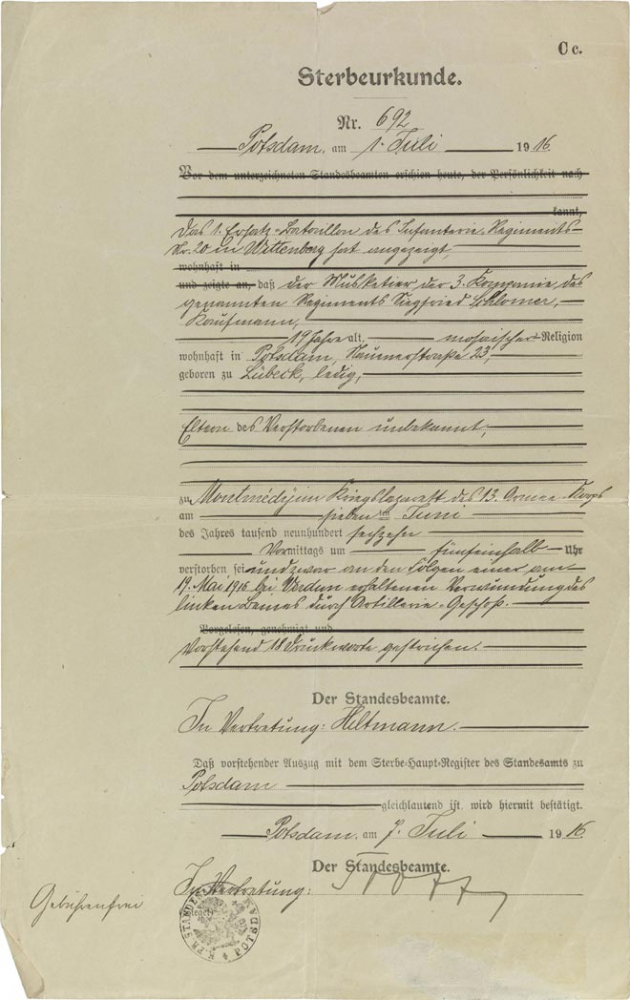 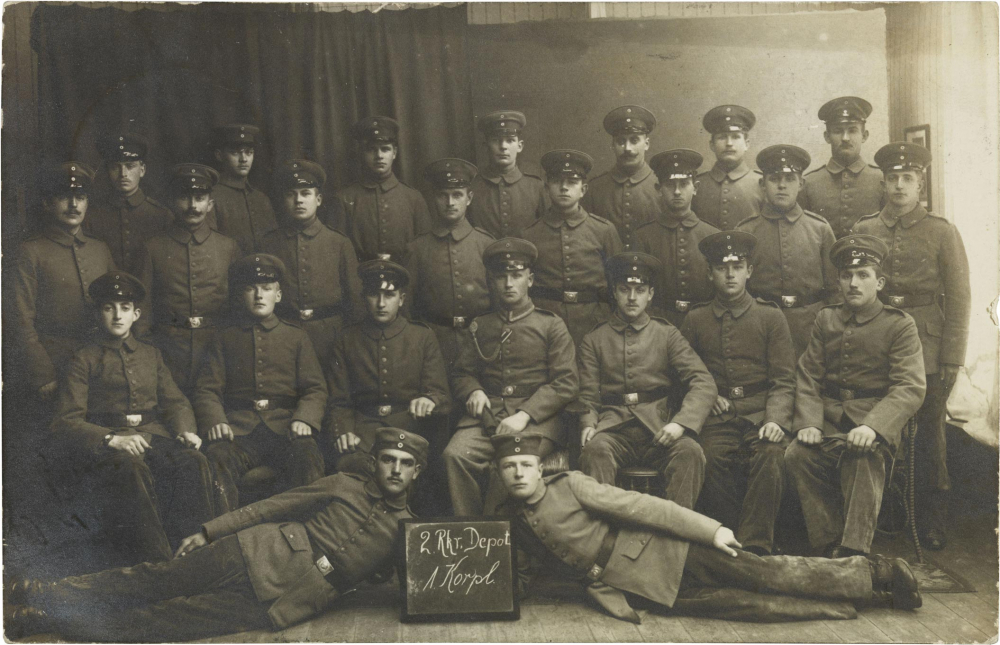 He was born on 4 August 1896 in Lübeck to Salomon Siegfried and Fanny Schlomer, née Haag.

Both of his parents died when he was eight, and thereafter his uncle Carl Haag in Hamburg cared for him and his sister Gertha, who was three years older.

Mementos and Places of Remembrance

On 12 February 1917, not quite a year after Schlomer's death, his relatives received a memorial certificate "for the memory of the one who fell on the field of honor," presented on behalf of the Prussian War Minister and conferred by the Kaiser "in heartfelt sharing of this heavy loss and in recognition of the immortalized one's proven loyalty unto death."

The certificate was intended to express the Fatherland's gratitude and to serve as a lasting memento for the family.

The memorial certificate itself has not survived, only the cover letter shown here. 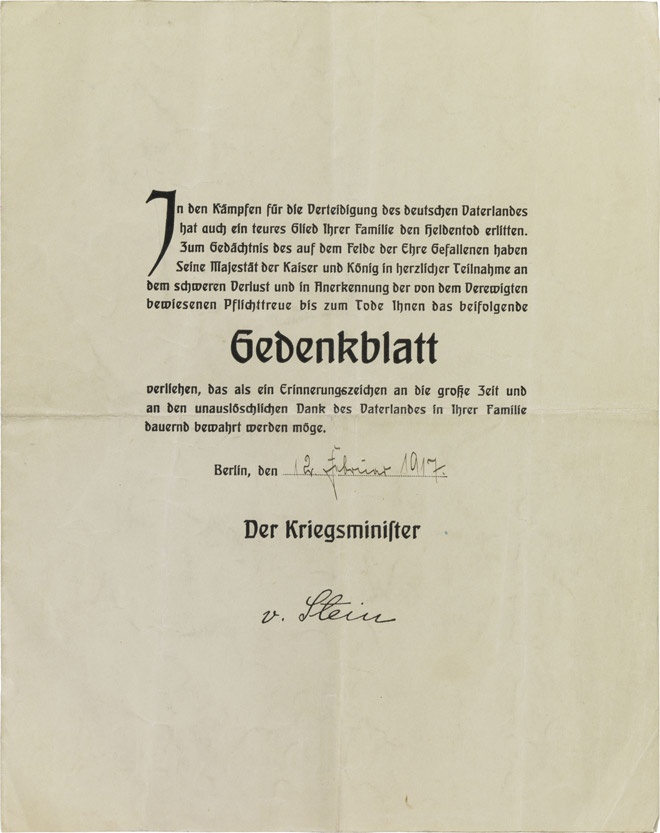 The few items testifying to Siegfried Schlomer's life were found among the possessions of his sister, who died in 1973 in Melbourne.

Gertha, a dentist, had emigrated to Australia with her family in 1938, transporting the mementos of her brother in her luggage on the long voyage. Among them was also a photograph of his grave in Montmédy, one of numerous military cemeteries in France that continue to bear witness to the war's hundreds of thousands of fatalities.

In Hamburg, where Schlomer grew up with his uncle, there are memorial stones in the Jewish Cemetery in Ohlsdorf which list the names of the Jewish soldiers who fell in the First World War, including that of Siegfried Schlomer.

You can find additional documents, photographs, and objects related to Siegfried Schlomer in our online collections (in German). 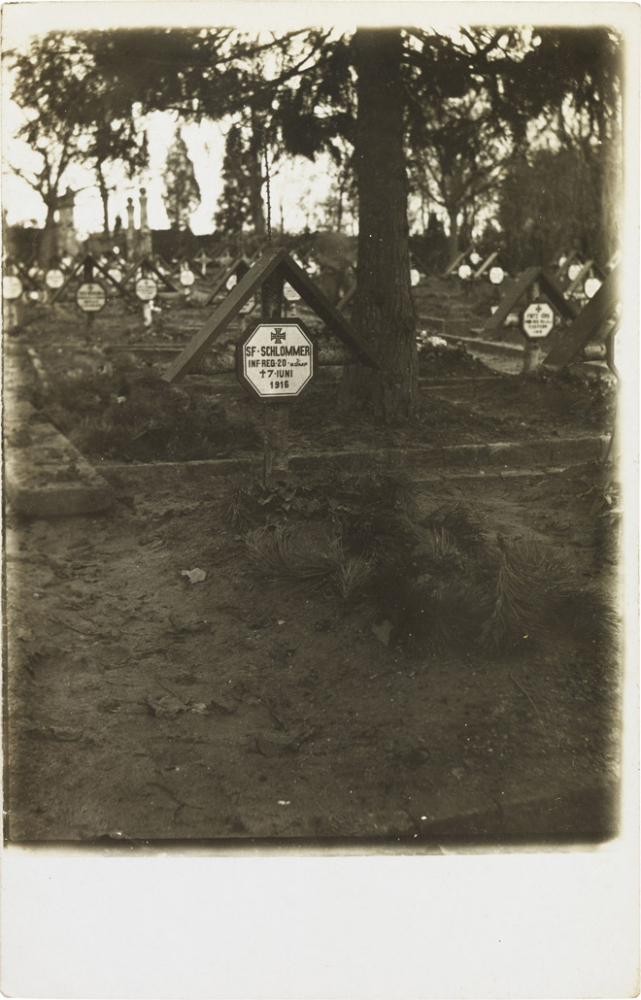 The grave of Siegfried Schlomer at the military cemetery in Montmédy; France, about 1918; Jewish Museum Berlin, gift of Marion Lippmann; photo: Jens Ziehe

Honorary Cemetery of the "German-Israelite Community of Hamburg" 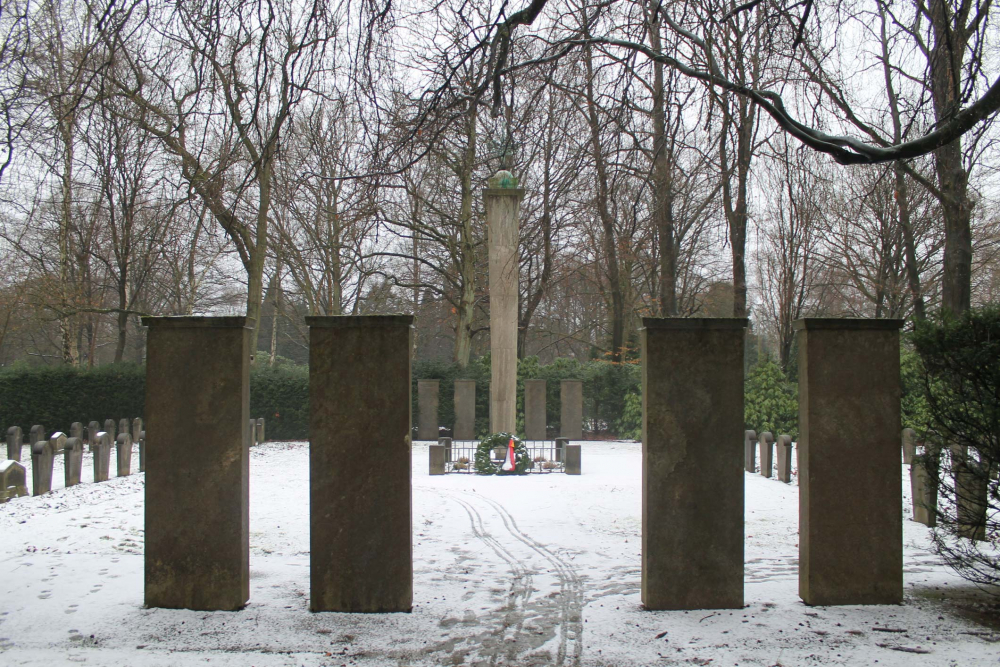 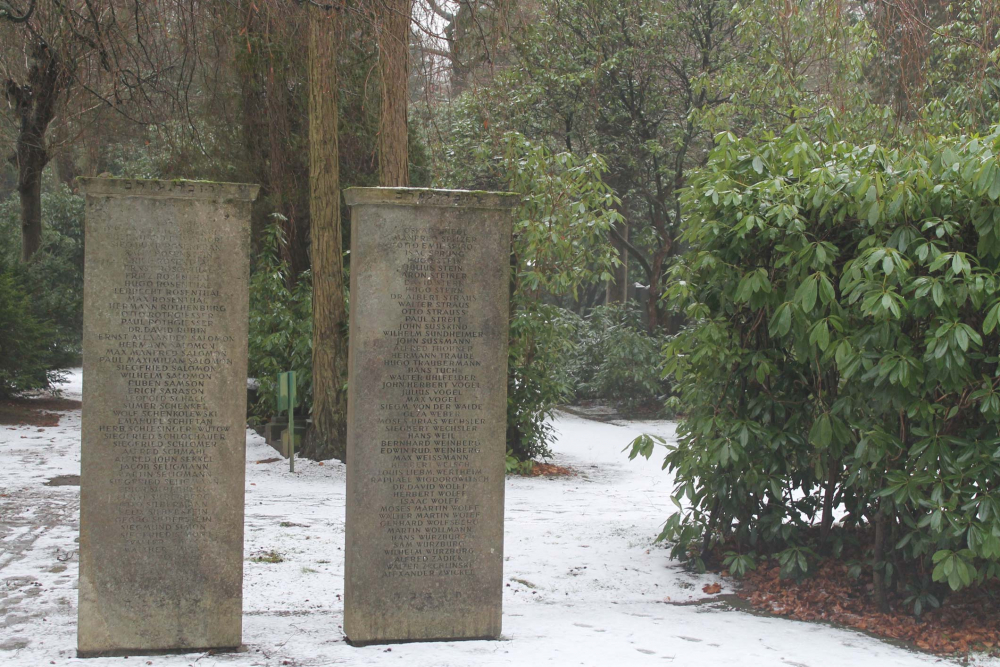