Two men in uniform, two brothers, photographed in a studio in 1916: Arthur and Richard Polack.
It is the third year of the war and it will be the last time the brothers are together.

The older brother, Richard Polack, is standing on the right. In civilian life he worked as a salesman and resided in Heidelberg with his wife and children. The number on the cover of his spiked helmet and collar patches indicates that he was a member of the Twenty-Sixth Landsturm Infantry Battalion in Baden’s XIV Army Corps.

Arthur, his younger brother of five years, lived in their hometown Hamburg and was also married, as revealed by the wedding band on his hand. He is sitting on the left and is wearing a Prussian uniform. On his cap are the black, white, and red cockades of the German Empire and beneath them the Hanseatic cockades. He belonged to the Reserve Infantry Regiment Hamburg 76.

A Boy from Hamburg

Arthur Polack was twenty-seven years old when he became a citizen of Hamburg in 1912. This made him eligible to vote in local elections. 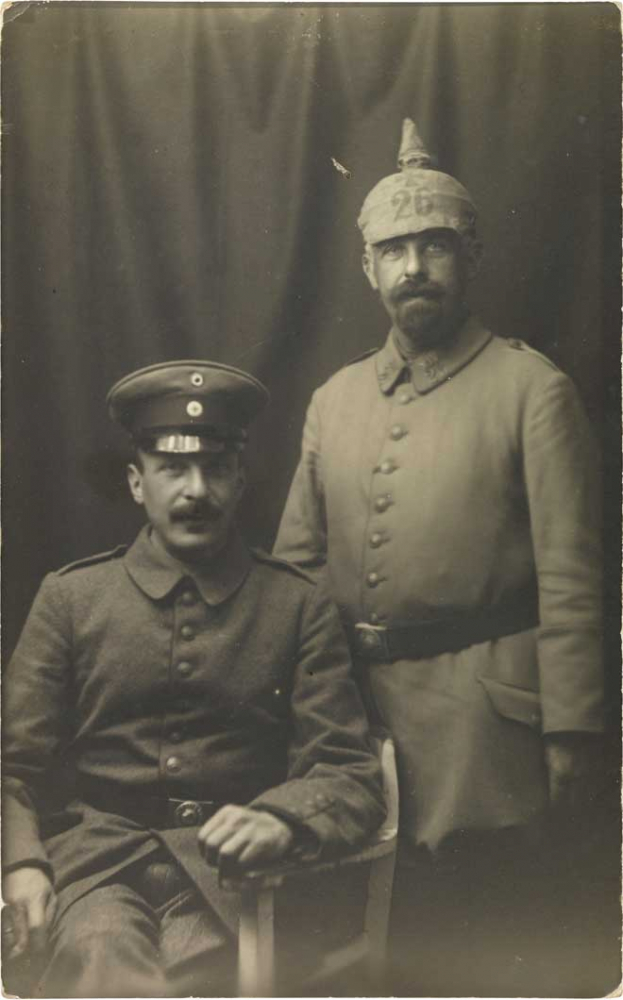 He was born in the Hanseatic city, attended school there, and completed his business training there as well. Thereafter, he followed in his father’s footsteps, who was a traveling tobacco salesman. Polack established his own tobacco company that had its headquarters across from Hamburg’s Speicherstadt, or warehouse district.

Arthur married his long-time fiancée Erna from Altona on 3 August 1914, immediately after the beginning of the war. His military conscription was most likely the reason why they decided to wed at precisely this time.

Details about his military service are not known. A military passport, salary book or other documents that could have told us more have not survived. 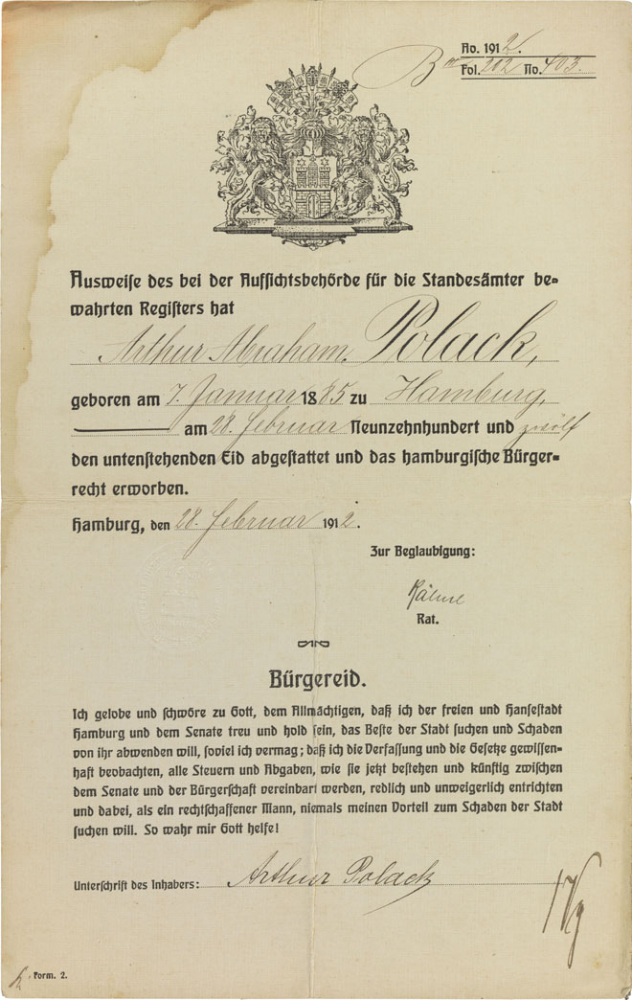 The only extant letter sent by Arthur Polack from the front is dated 29 June 1917, when he was serving near Arras in northern France. It was written to his cousin Anni Bredee and in it, Arthur openly expresses his thoughts and feelings. There is no trace of heroic valor or patriotic pride: he writes about how shocked he was by the death of his brother-in-law, who had fallen shortly before. He felt alone in his sadness, “sitting here, death before my eyes, its victims all around me,” while all his comrades were “desensitized.” He was also worried for his sister, who as a widow would now have to raise her two sons alone. And finally, he was concerned about his wife. He wanted to survive for her, “and yet it is impossible.” In view of the directness of the letter, it is remarkable that it got past the military censors.

Arthur Polack seems to have had a premonition of his own death in the face of the carnage that he was confronted with. 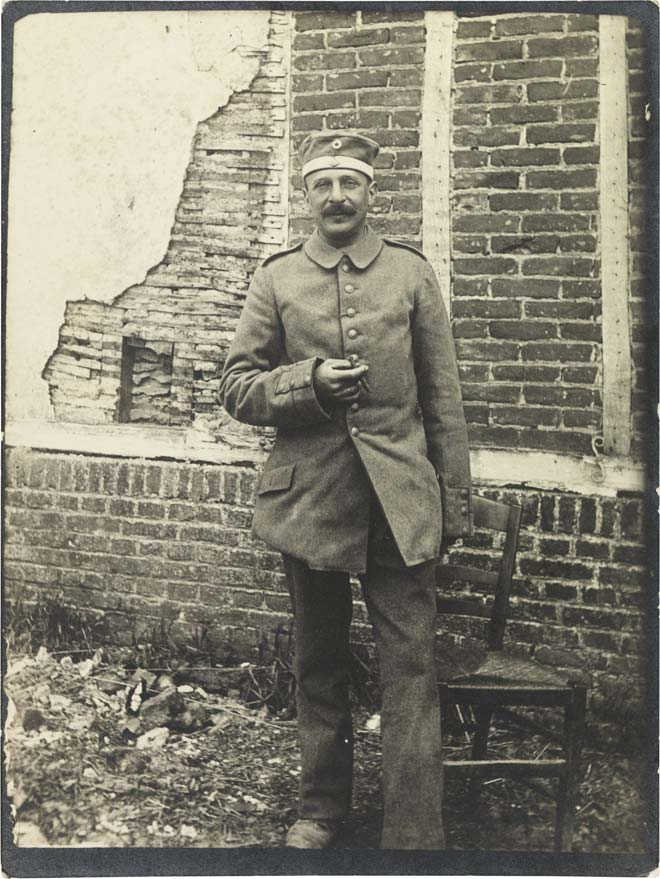 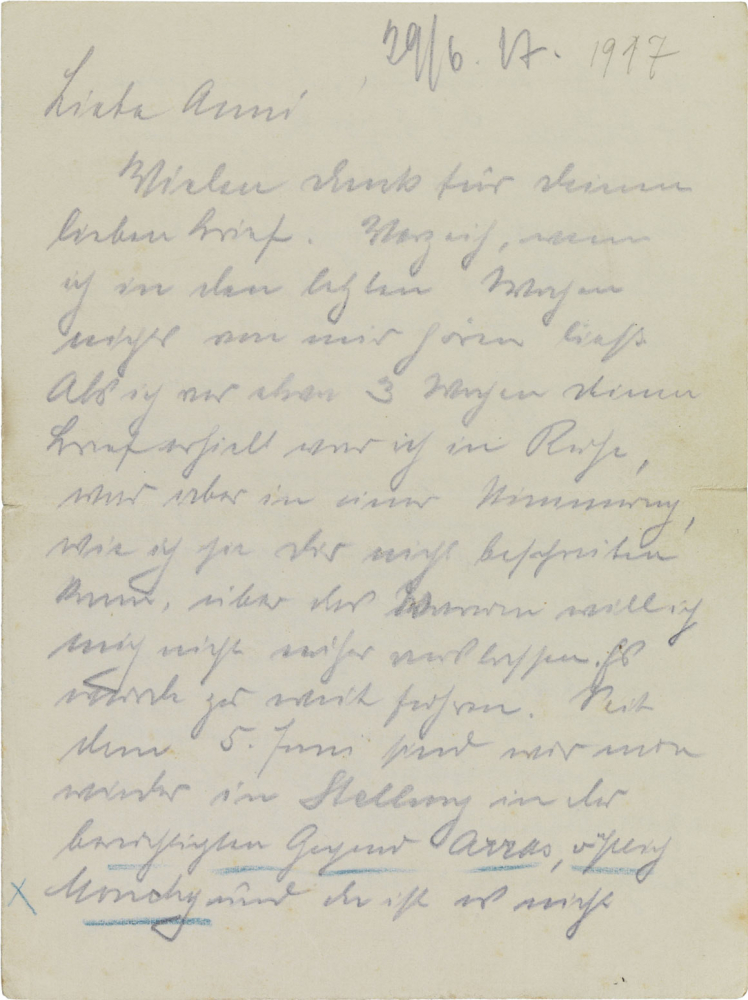 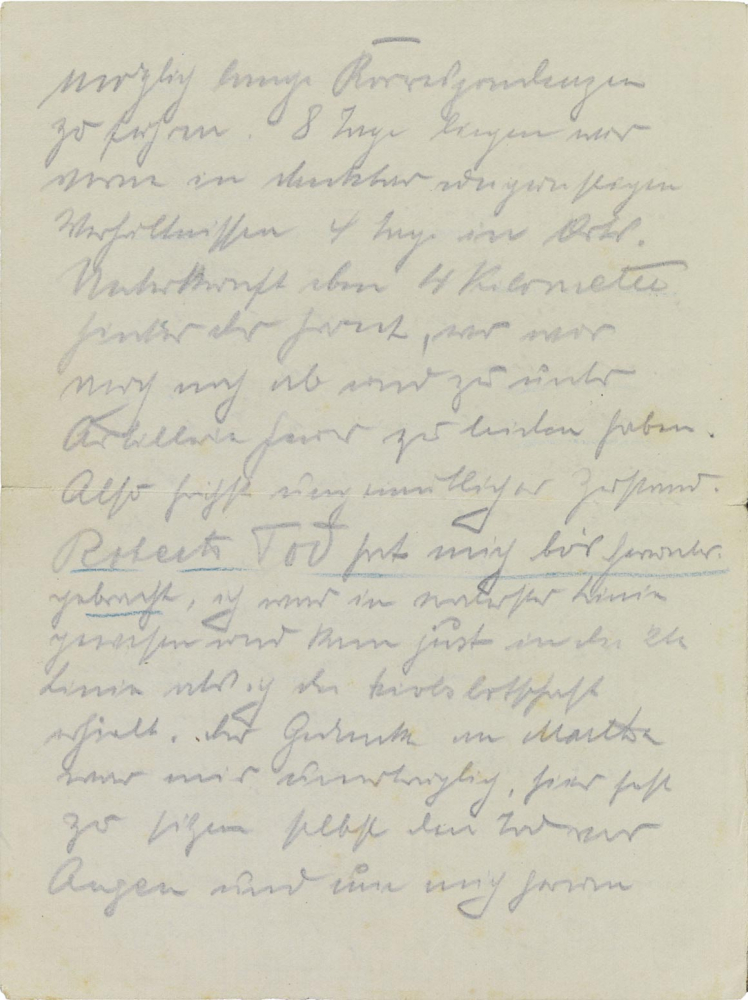 Letter sent from the front by Arthur Polack to his cousin Anni Bredee (page 2); 29 June 1917: “Robert’s death has shaken me terribly, I was in the first line and had just come back to the second when I received the bad news. The thought of Martha was unbearable for me, sitting here, death before my eyes, its victims all around me. I’ve lost many comrades in the last little while and feel more and more alone. No one here who empathizes with the pain, everyone is desensitized, all miss beloved relatives, but the feeling for pain is completely dulled. How many widows & orphans have been left behind by close comrades and in what state of affairs? Must we not master our pain? Are we allowed to lament?” Jewish Museum Berlin, gift of Orah Young; photo: Jens Ziehe 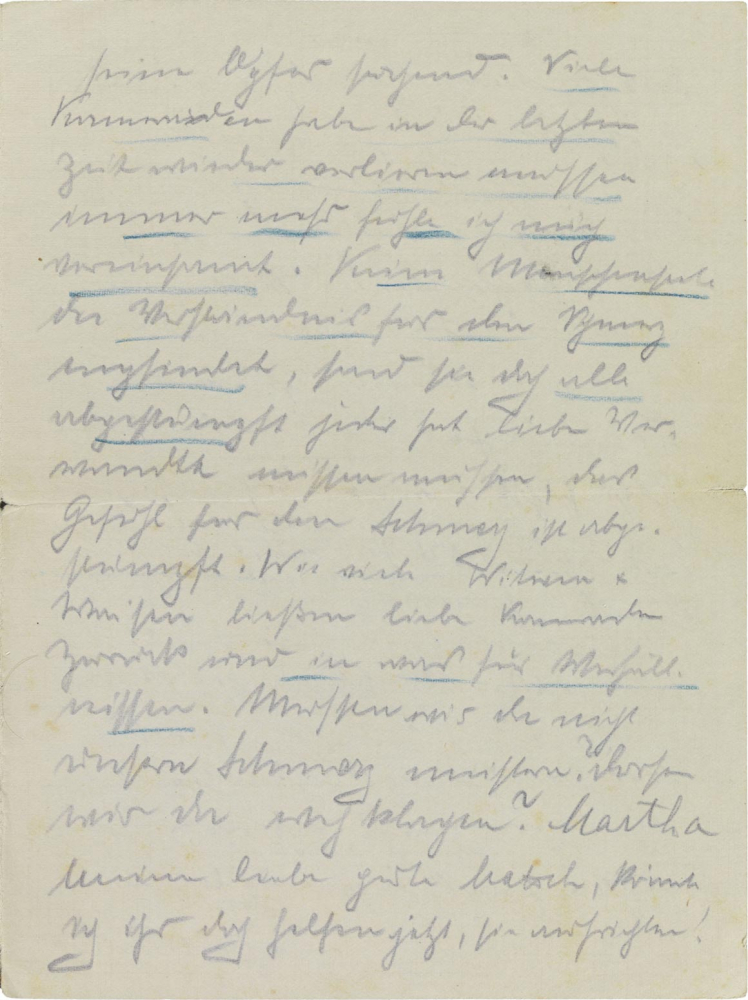 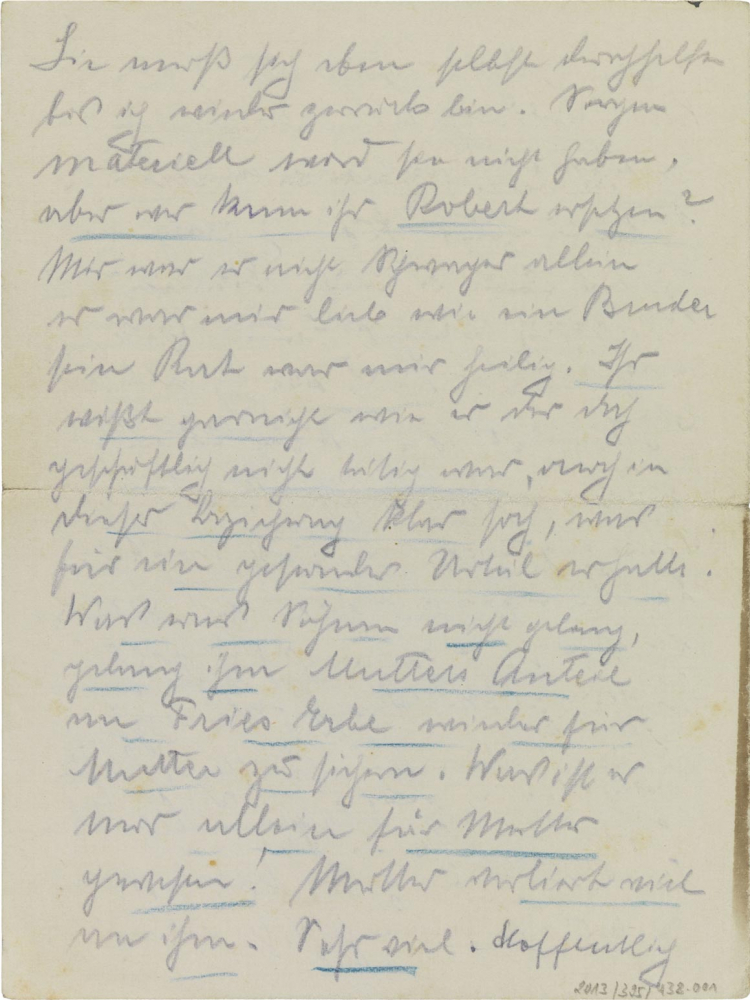 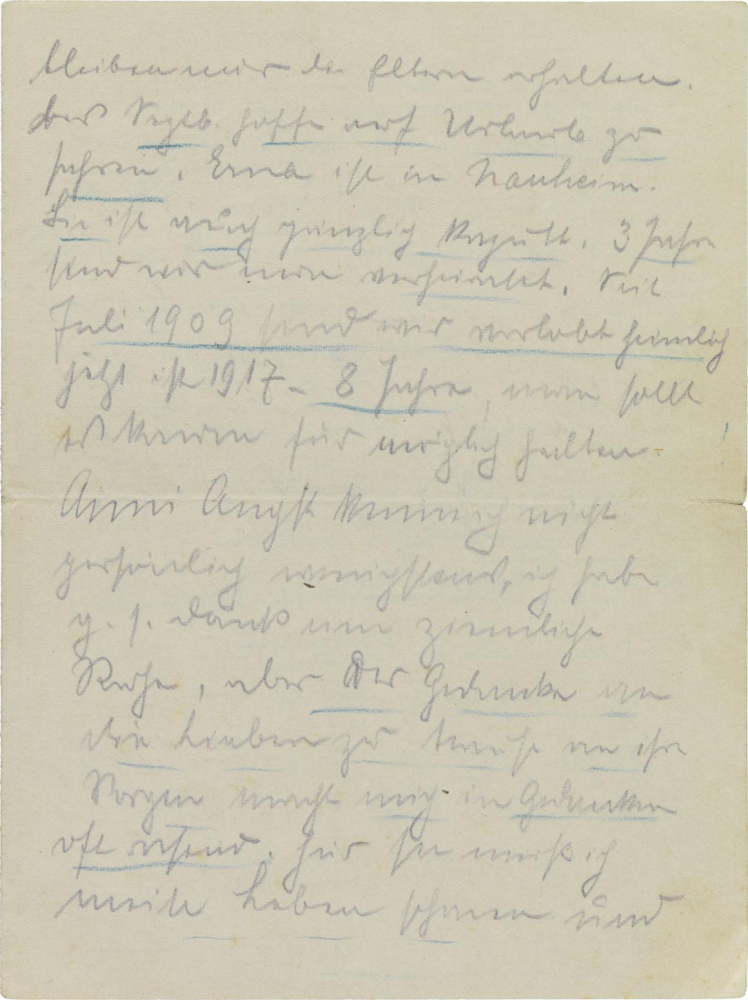 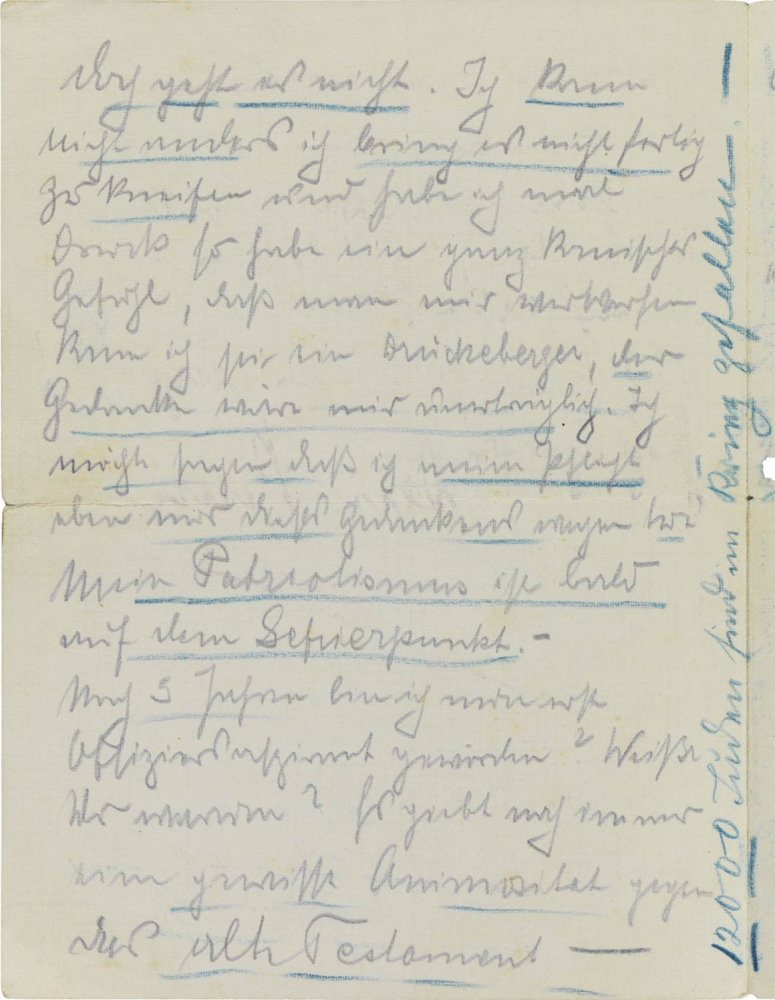 Letter sent from the front by Arthur Polack to his cousin Anni Bredee (page 6); 29 June 1917: “I can’t act differently, I can’t back down and when I feel under pressure, I have the strange feeling that one might accuse me of being a shirker, the thought is unbearable. I want to say that I have only fulfilled my duty because of this thought alone. My patriotism will soon have reached its all-time low. – Only after 3 years can I now aspire to become an officer? Do you know why? There is still a certain animosity towards the Old Testament. – Anni, what use is complaining. Recently a comrade answered a superior officer’s question: Tough it out & shut up!” Jewish Museum Berlin, gift of Orah Young; photo: Jens Ziehe 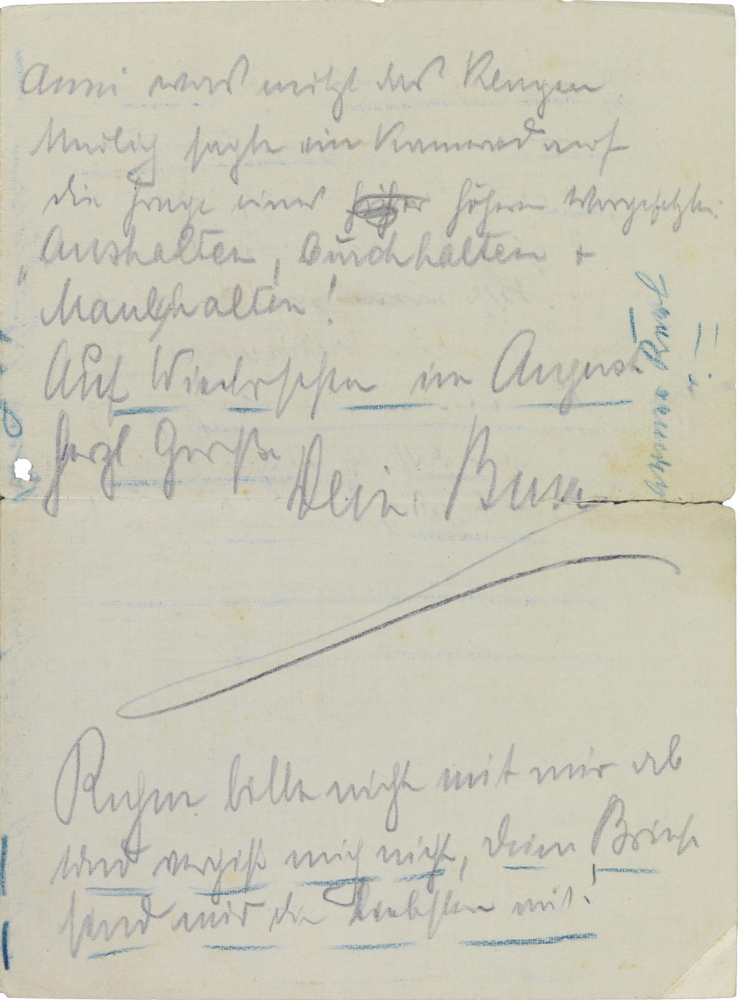 Polack discussed experiences of antisemitism in his letter with extraordinary openness. He did not refer to the “Jewish Census” carried out some six months before the letter was written, which was a reaction to the widespread – and false – notion that Jews were attempting to shirk military service. However, he traced the fact that he remained a subordinate officer back to “a certain animosity towards the Old Testament.” Thinking of the way Jews had been denounced as “shirkers,” he bitterly concluded: “My patriotism will soon have reached its all-time low.”

Two and a half weeks later, Arthur Polack was dead.

Letter to His Parents

The 32-year-old died on 17 July 1917 at 6 in the morning “during an attack on an enemy position” east of Monchy-le-Preux. A hand grenade ended his life. 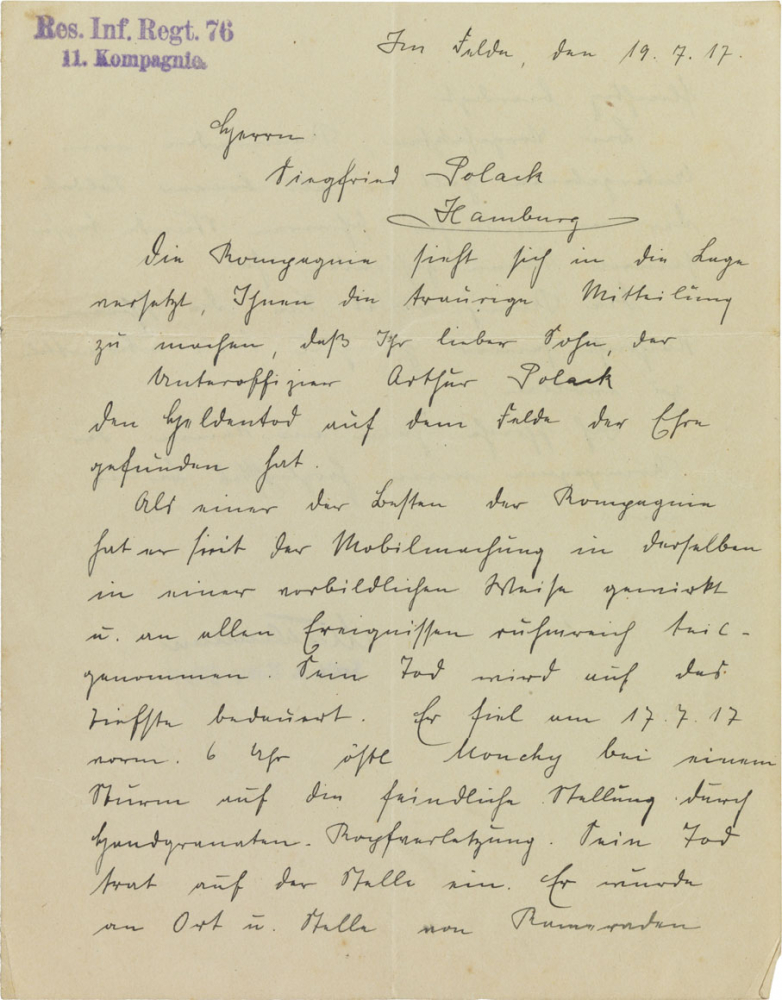 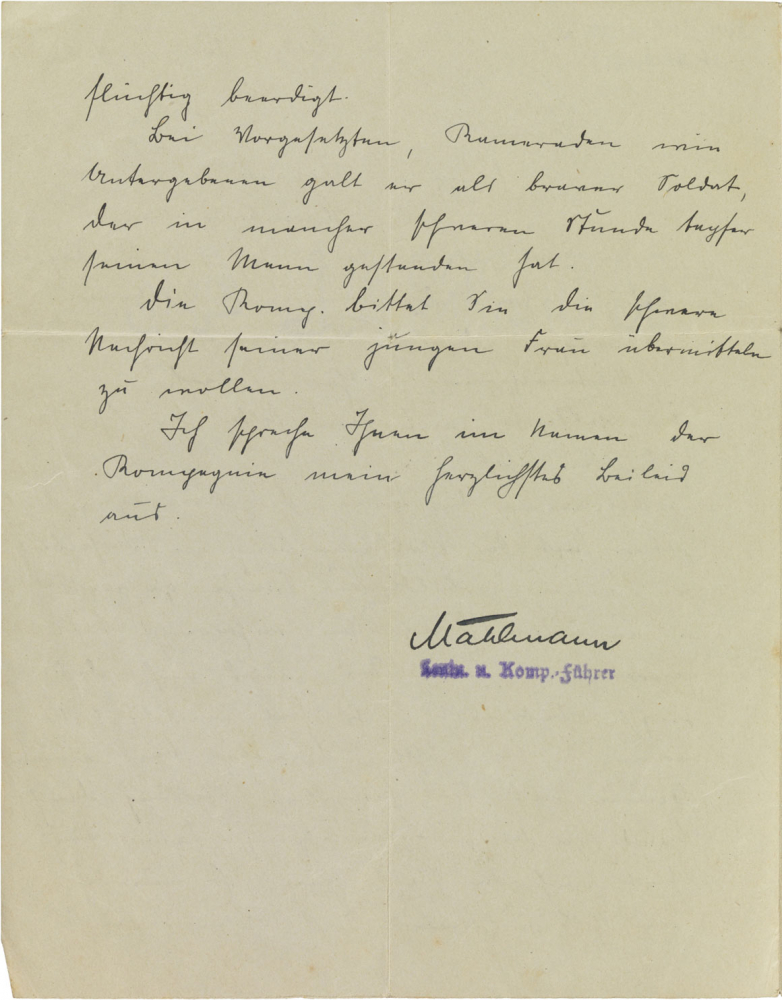 Fellow soldiers had initially “hastily buried” Polack at the site of his death.

It was only in 1935 that his brother Richard Polack – who had since emigrated to France and was only in Germany periodically – learned that Arthur’s remains had been reinterred at the St. Laurent-Blangy military cemetery.

In 1936, the Hanseatic City erected a memorial for the fallen soldiers of the Hamburg Infantry Regiment 76, to which Arthur Polack had belonged. Still standing today, it consists of a rectangular block made of coquina with a relief depicting marching soldiers. The engraving in the center reads: “Germany must live, even if we must die.”

The dedication ceremony was staged by the Nazis as a glorification of war and as propaganda for the coming conflict.

You can find more documents and photos related to Arthur Polack in our online-collection (in German). 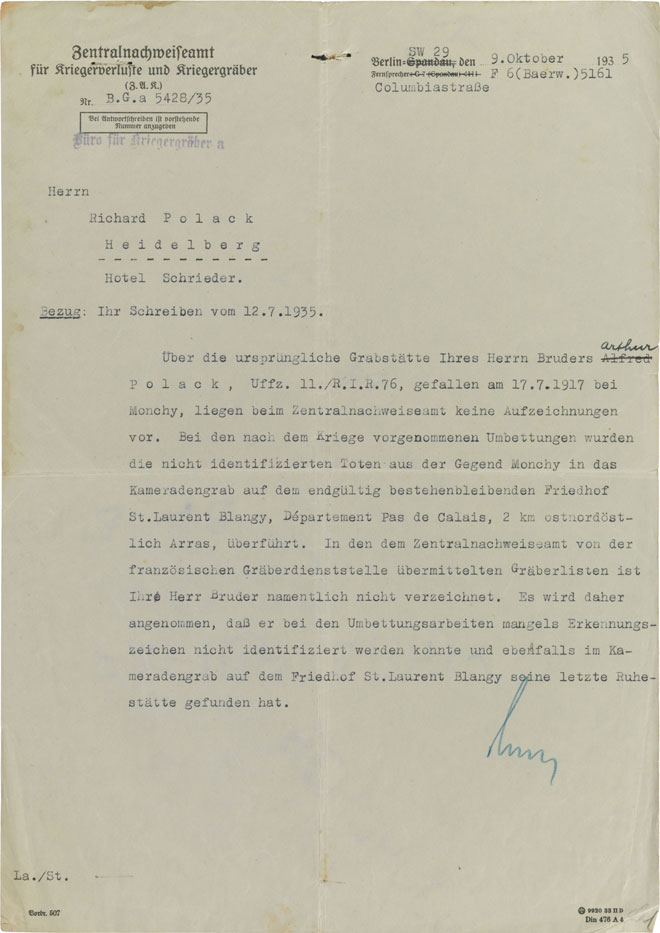