Theodor Lewin was the offspring of a large family. A tailor’s son, he was born the eighth of nine children in London in 1884. When he was three years old, his parents decided to return home to Germany and build a new life in Berlin.

Lewin spent his childhood in the capital. At age fifteen, he began training to become a textiles salesman. He would have liked to have done something different, but followed his parents’ wishes. He worked for a few years for different department stores in Berlin and used the time to train as a decorator.

In 1907, he met his future wife Luise Fleck, a Christian woman and married her against his parents’ will in 1909. The young groom considered converting and had his son Abraham Albert baptized. 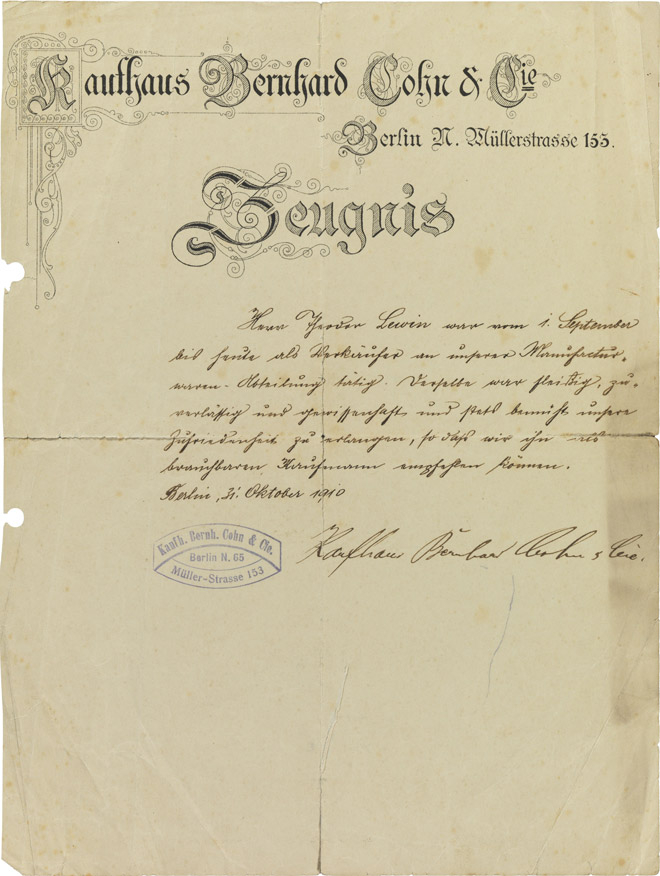 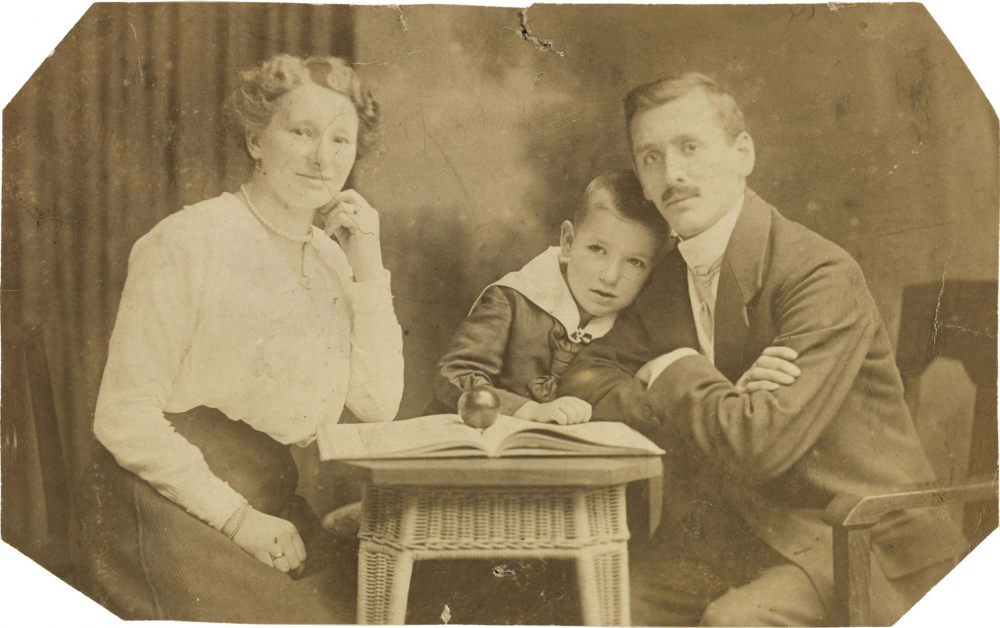 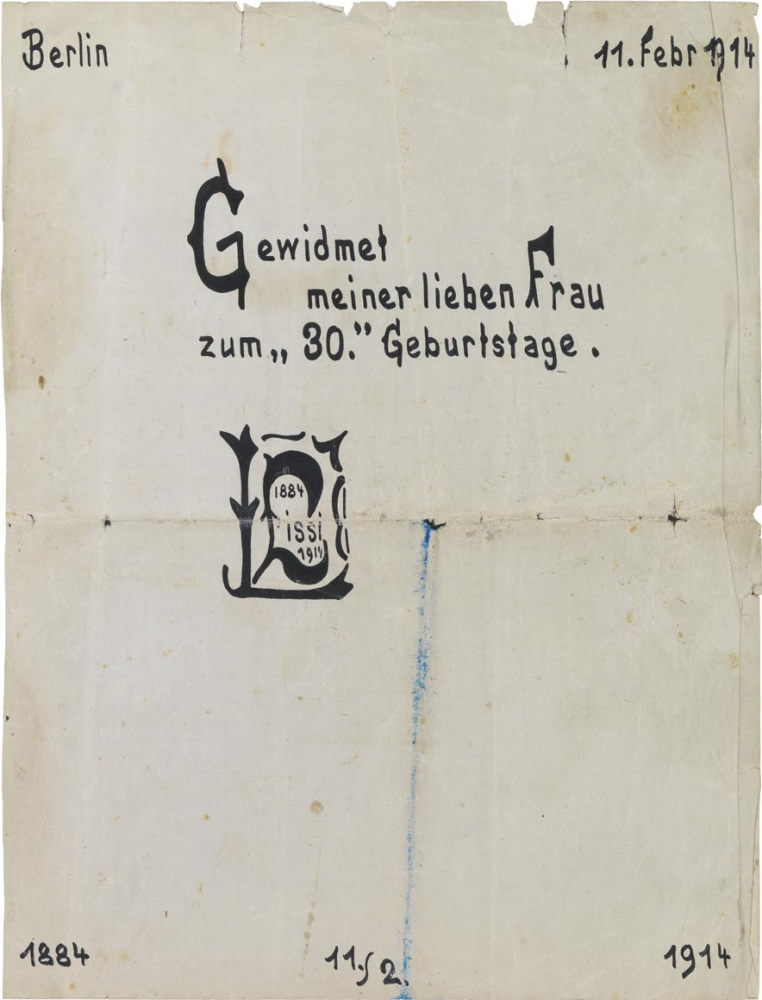 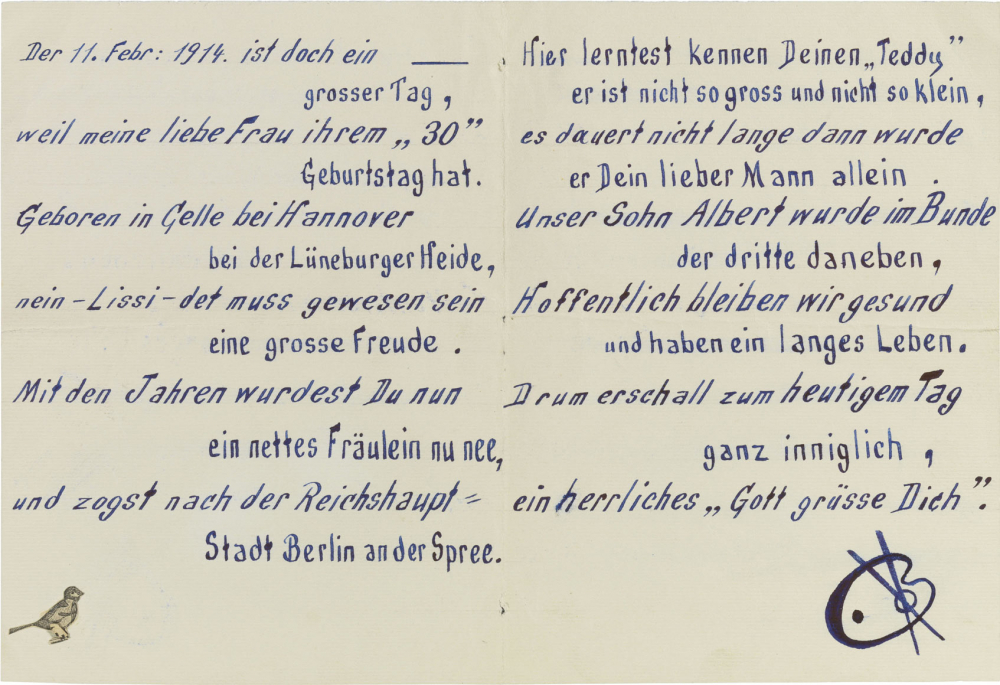 Theodor Lewin was thirty years old when he was drafted in April 1915. A few weeks later, on 1 July, he was conscripted into the Forty-Third Infantry Regiment in Königsberg. He deeply regretted having to leave his wife and six-year-old son, whose first day at school he would now miss.

Towards the end of August, he sent his “dear son little Ally” one of the popular postcards depicting trivializing or heroizing images of war that many soldiers sent home to their families.

Lewin himself did not yet have any experience on the front. However, he probably sensed that the joyful mood in the trenches depicted on the postcard did not accurately portray the reality of war.

Postcard to His Son Albert 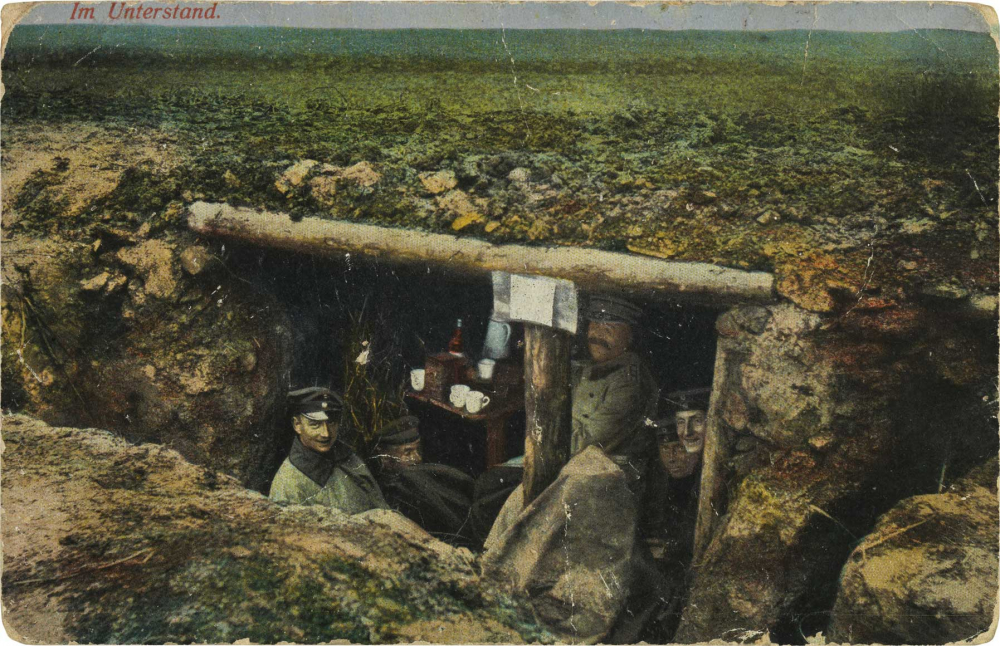 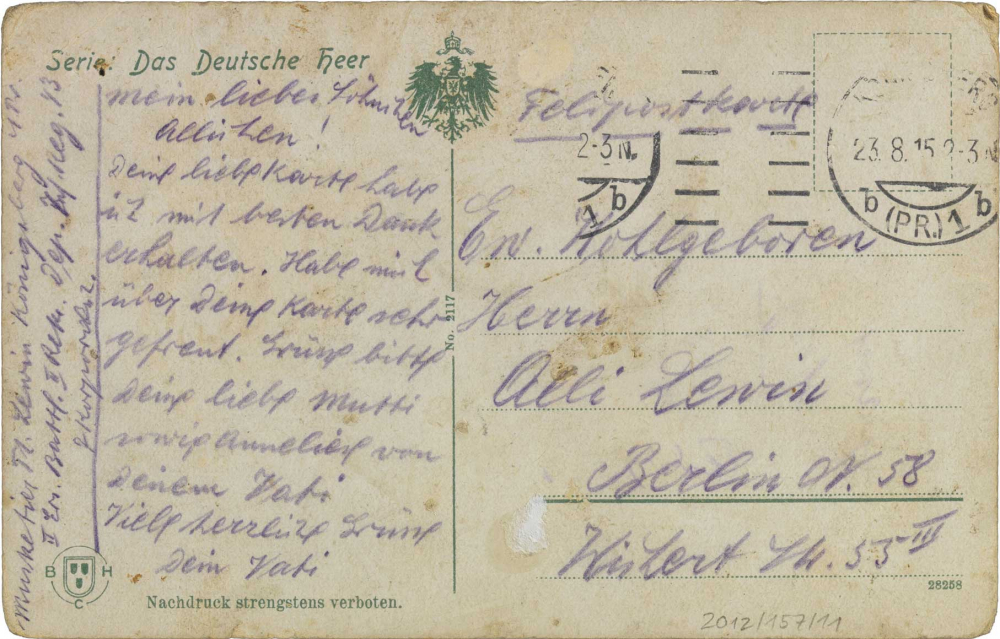 Postcard sent by Theodor Lewin from the front to his son Albert (reverse), Königsberg, 23 August 1915.
He writes:

“My dear little Ally! I gratefully received your nice card. I was very pleased to get it. Send your father’s greetings to your dear mother and to Anneliese. Love, Father”

After two months in Königsberg, Theodor Lewin’s company received an order to go to the Eastern Front. He now found himself in the thick of the war. 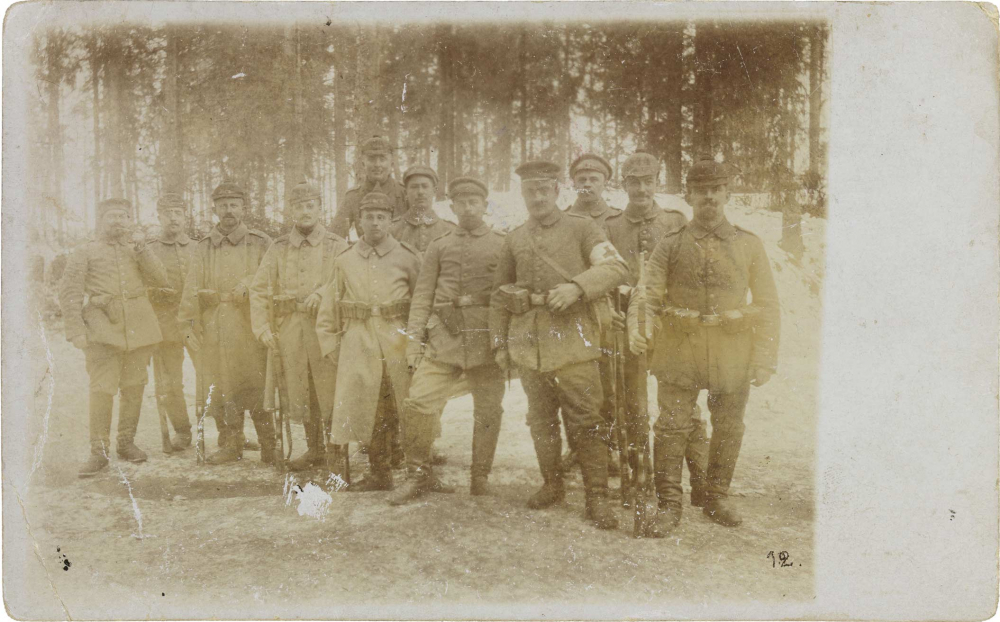 Theodor Lewin (fourth from the left) as a soldier in a group photograph, 1916; Jewish Museum Berlin, gift of Rosemarie Lewin; photo: Jens Ziehe

When Lewin fell ill in 1916 and returned to Germany for a short period, he was already keeping a war diary. It begins with an account of his life that reveals important biographical facts. He also wrote about his experiences on the Eastern Front. He was particularly affected by the Russian-Polish villages he came upon, whose impoverished residents were mostly Jewish.

"The villages are pure misery. (…) The houses are made of wood and have shingle roofs. I have not seen stone houses in Russian Poland. Entire families live in one room. In this room, they cook, sleep, wash, and do all other domestic chores. The families have many children. In the one corner, there is a sort of dais where the whole family sleeps. They cover themselves up with old rags. There is a sort of box tied to string that is supposed to be a cradle. A baby is lying in it. Their other animals are also in the room. They seldom wash. Thus, there are many insects and a foul smell in the house. The children run around half-naked, they relieve themselves in the open. They usually go barefoot in the winter. The men wear furs and high jackboots; the women are barefoot and wear headscarves. (…) The towns are primarily inhabited by Jews."

Lewin writes about his experiences on the front in a short passage that conveys the effect that the horrors of battle had upon him:

"In late September, we still had skirmishes with the Russians, which lasted through early October. The experience impacted me greatly. To see the dead, the injured suffering. My hand hesitates to write it down." 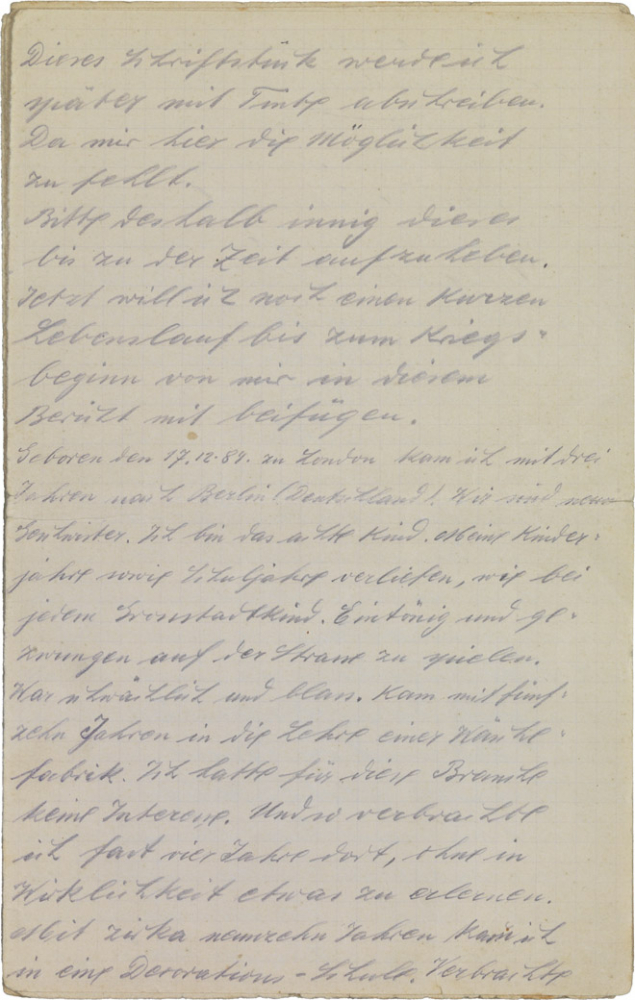 In March 1918 Musketeer Theodor Lewin was awarded the Iron Cross Second Class, “in the name of His Majesty the Kaiser and King.” 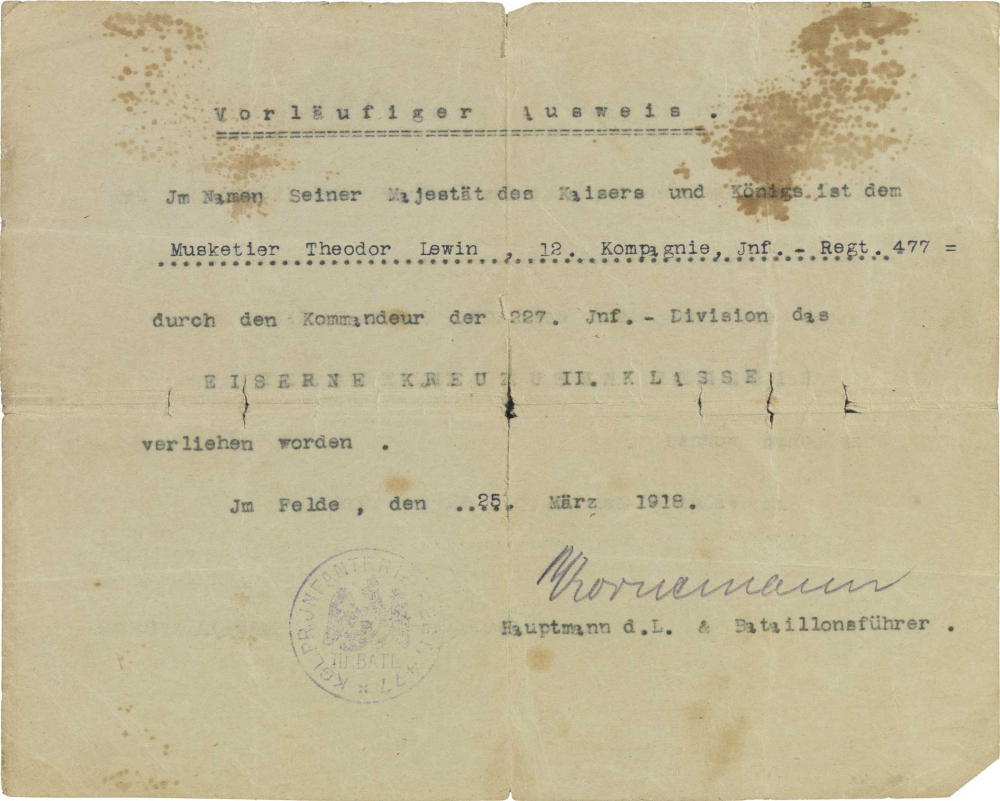 Lewin was now in his fourth year as a soldier and fighting on the Western Front in the 12th Company of the Infantry Regiment 477. He had clearly distinguished himself during the spring offensive in France.

Last News from the Front

Six months after he received the Iron Cross, his wife was informed of his demise. In a letter written from the front, a company lieutenant expressed his condolences:

"The company regrets to inform you that your husband died a hero’s patriotic death in heavy fighting near Soissons on 7 Sep ’18. He was hit directly by an artillery shell and died immediately. He had joined our company only a few days beforehand from the 12th company.
In the name of the company I send you my warmest condolences for this bitter loss." 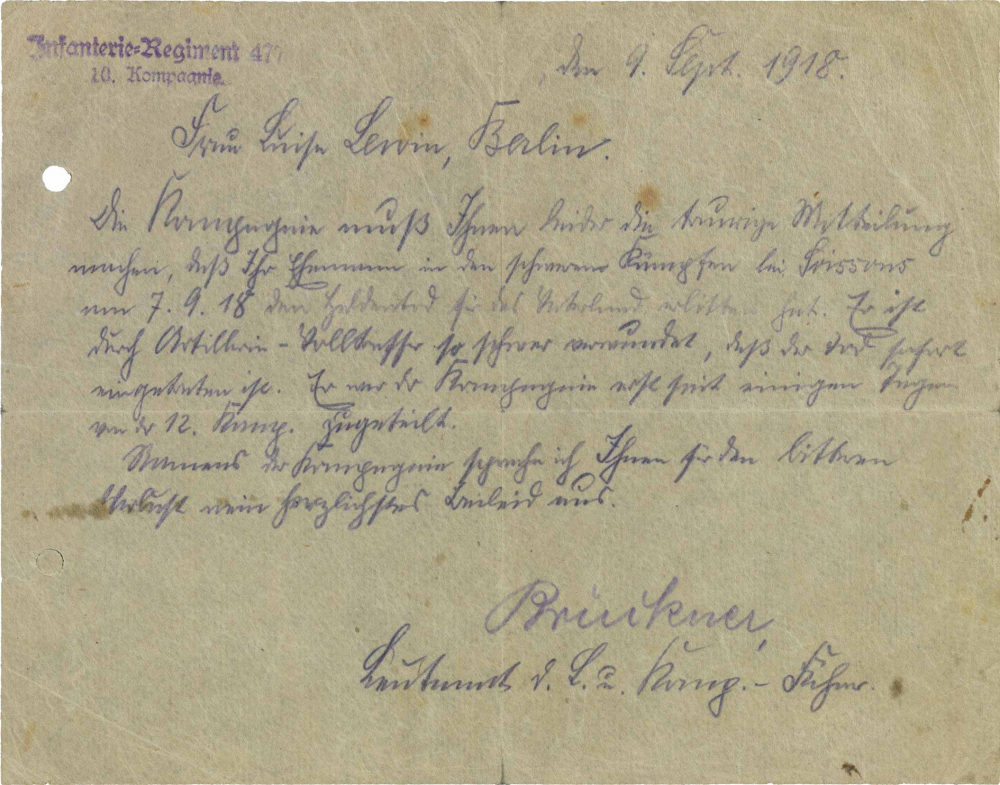 Letter of condolence from Lieutenant Bruckner to Luise Lewin informing her of the death of her husband, 9 September 1918; Jewish Museum Berlin, gift of Rosemarie Lewin; photo: Jens Ziehe

It is not known where Theodor Lewin was buried.
More documents and photographs related to Theodor Lewin can be found in our online collection (in German).