Dr. Fritz Goldschmidt called it the “loafer’s living,” a time he would have done “better off without.” He was referring to his last period of leave from the front, which he was granted in order to attend his brother Ludwig’s wedding on 22 January 1918.

The twenty-eight-year-old doctor thereby received a three-week reprieve from the trench warfare in French Flanders. The group photo of the wedding guests, taken during the celebration in Frankfurt am Main, is the last picture of Goldschmidt. 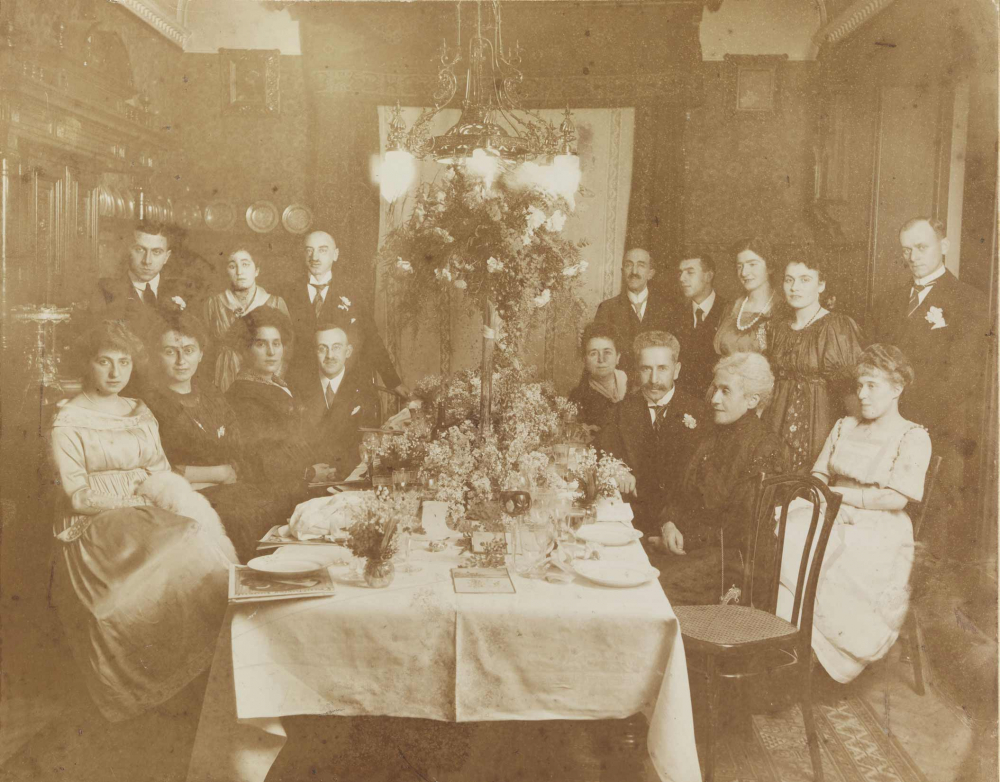 Goldschmidt was born on 29 June 1889 in Neumarkt, Upper Palatinate. After completing high school, he performed his military service in 1908–09 as a “one-year volunteer” before being transferred to the Reserve as a medical private. He studied medicine, planning to become a doctor.

He was living in Nuremberg when the war broke out. From the outset, he helped provide medical services to wounded soldiers at a Reserve military hospital in the city. On 3 November 1914, he himself was deployed to the battlefield.

In November 1915, Goldschmidt was honored with the Iron Cross Second Class in the name of His Majesty the Kaiser. At the time, he was a member of the Bavarian First Field Pioneer Company and had just made it through months of combat in the hills of Apremont in northeastern France.

One can only surmise the horrors that the doctor must have faced there, in light of the fact that he had shortly before completed two training courses for treating gas victims. 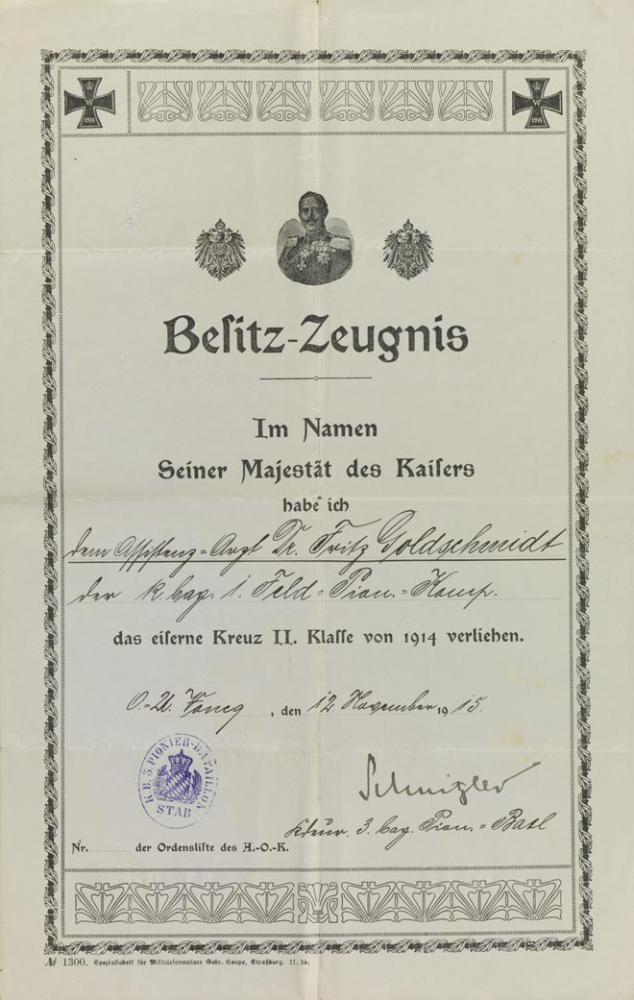 The following year, Goldschmidt received an honor from the King of Bavaria and was decorated with the Royal Order of Military Merit Fourth Class with Swords.

Shot in the Head

During the Spring Offensive on the Western Front, Fritz Goldschmidt fell on 26 March 1918 after sustaining a fatal shot to the head. He died near Bucquoy in northern France.

The German military report for that day includes the following victorious account for that section of the front:

"In a bitter struggle, the enemy was thrown back; we have crossed the Bapaume-Albert road near Courcelette and Pozières."

Goldschmidt’s remains were later reinterred at the St.-Laurent-Blangy military cemetery. His final resting place was in a mass grave. 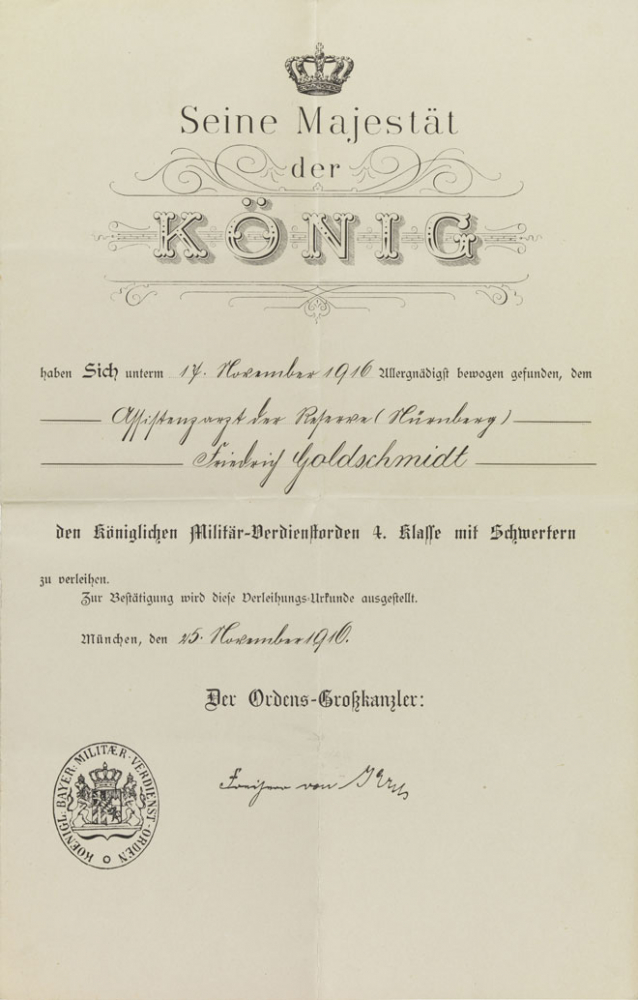 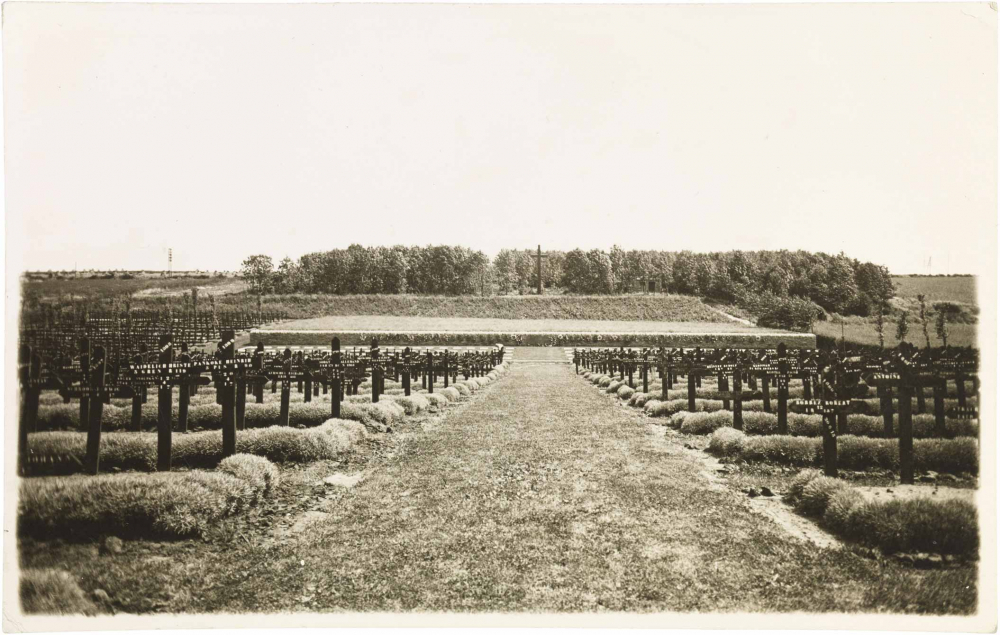 Five months after the war’s end, the Israelite Religious Community of Neumarkt celebrated its fiftieth anniversary. To mark the occasion, a small commemorative volume was published, in which the district rabbi Dr. Magnus Weinberg patriotically commemorated the eleven fallen members of the community, including Fritz Goldschmidt.

His name was also listed on a plaque in the synagogue as well as on the Memorial for the Fallen that was erected in the Jewish cemetery of Nuremberg, bearing the dedication:

Excerpt from the Commemorative Volume 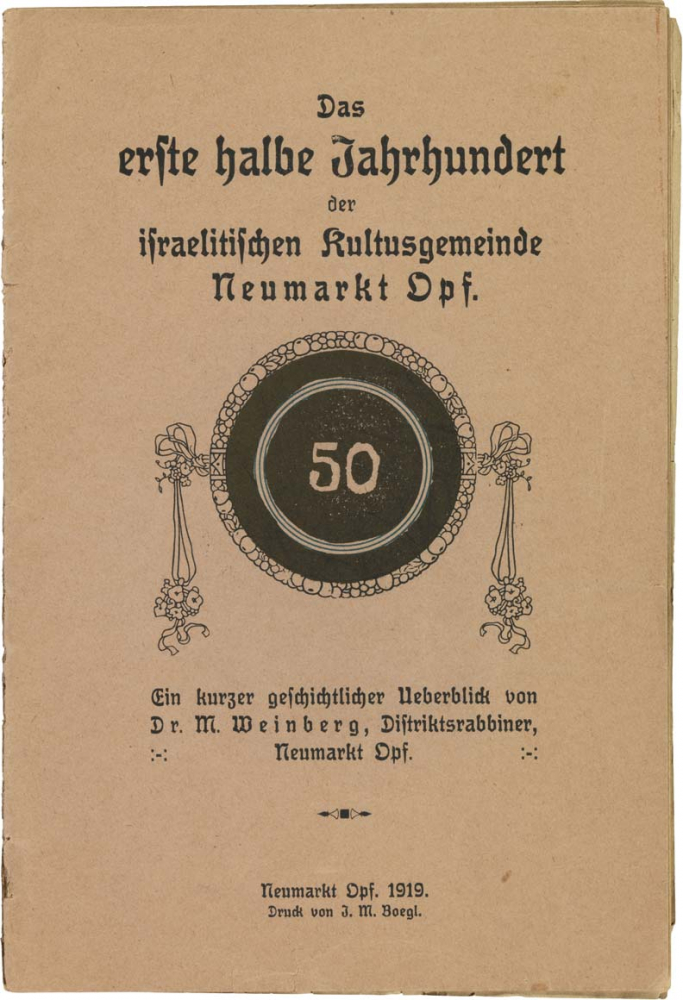 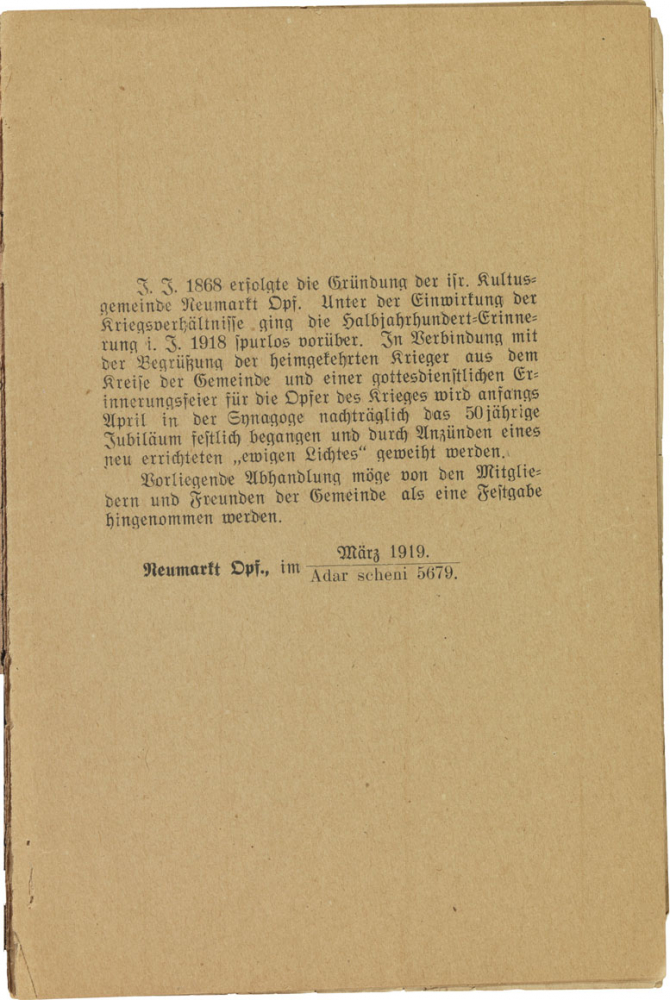 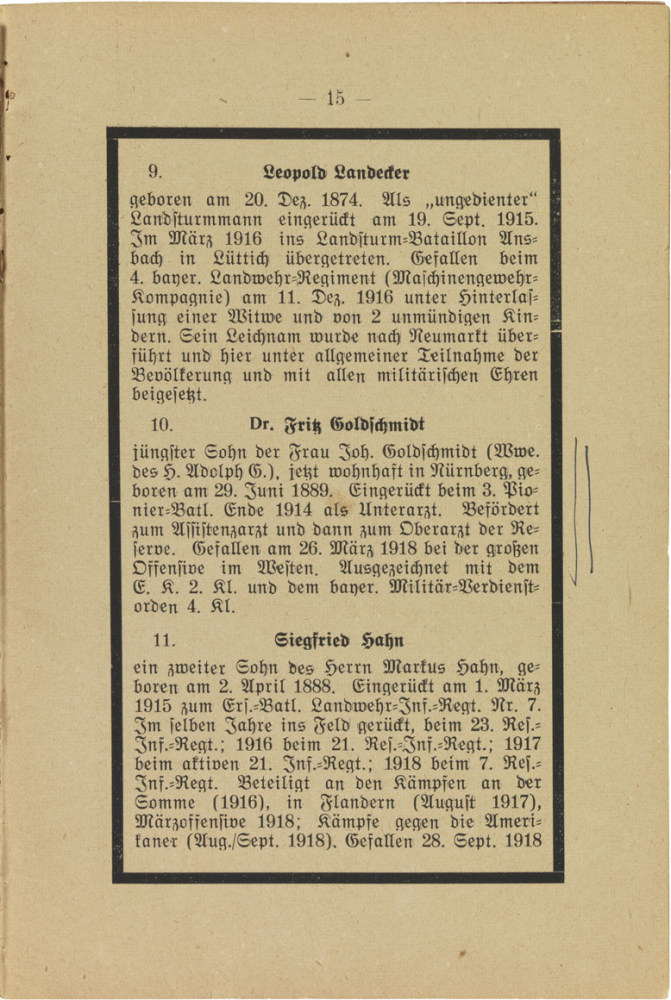 Transcription of the short biography of Fritz Goldschmidt:

“Dr. Fritz Goldschmidt
youngest son of Mrs. Joh[anna] Goldschmidt (widow of Mr. Adolph G.), now living in Nuremberg, born on 29 June 1889. Joined the 3rd Pioneer Battalion in late 1914 as a medical sergeant. Promoted to 2nd lieutenant and then to medical colonel of the reserve. Fell on 26 March 1918 in the great western offensive. Decorated with the I.C. 2nd Cl. [Iron Cross Second Class ] and the Bavar.[ian] military order of merit 4th cl.”

Goldschmidt’s bereaved relatives had a portion of the wedding celebration picture enlarged. With this portrait, taken on a joyous occasion, they kept the memory of their late son and brother alive.

It is preserved in the Archive of the Jewish Museum Berlin together with further documents from the Goldschmidt family donated by the widow of Fritz Goldschmidt’s nephew.

You can find more information on our archival holdings related to Fritz Goldschmidt in our online collections (in German). 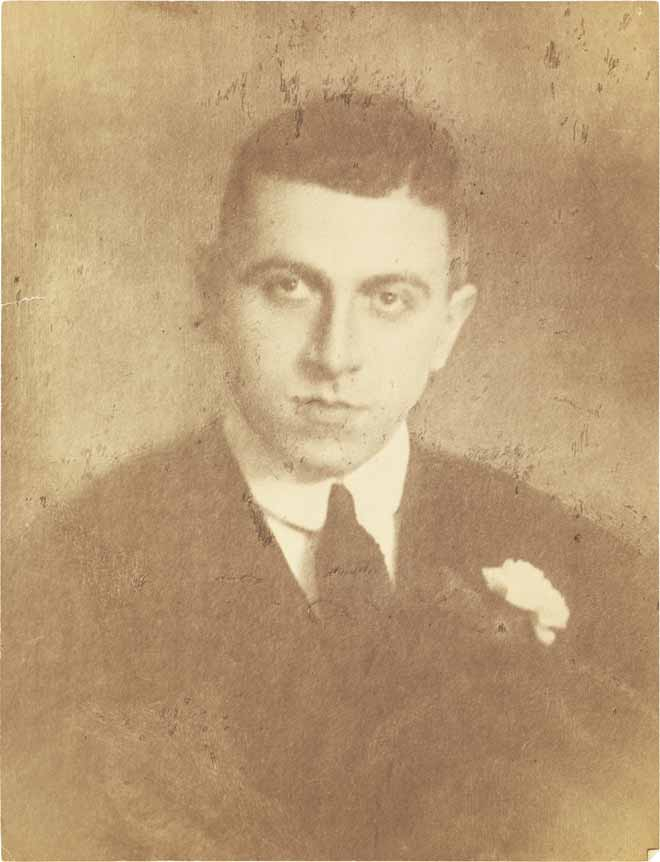