On 12 Sep­tember 1942, in the middle of the Second World War, Albert Ein­stein wrote a letter to nineteen-year-old German-Jewish refugee Hans Kaufmann in Santiago de Chile. In it, he ex­presses grave mis­givings about the creation of a central authority to protect Jewish interests. The letter was in answer to a communi­cation by the young man in which he had asked Einstein to head a Jewish orga­nization which would defend the interests of Jews, their dignity, and the project of a national home in Pales­tine. In cele­bration of the gift of this impor­tant letter penned by the world-famous Nobel prize winner, the Archive of the Jewish Museum Berlin is hosting a sympo­sium dedi­cated to topics relevant to the letters of Hans Kauf­mann and Albert Ein­stein: the history of the Kauf­mann family, German-Jewish emigration to Chile during the Nazi era, Albert Einstein’s attitude towards the Jewish national project, and the status of Zio­nism in the year 1942. 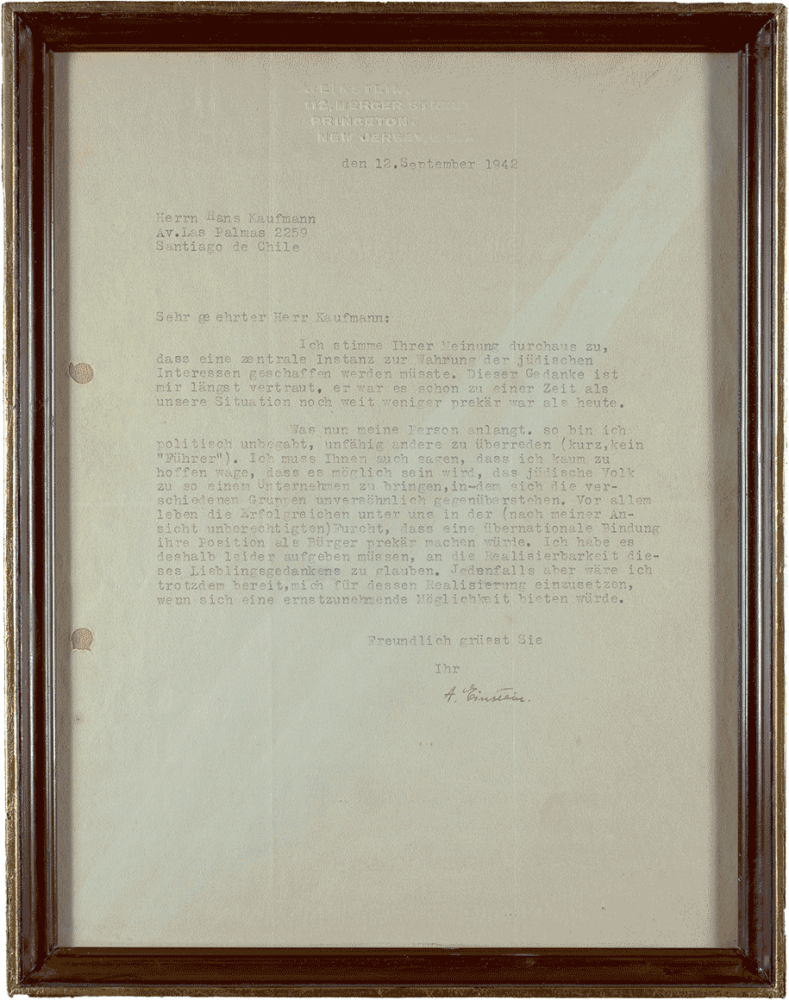 I am in absolute agreement with you that a central authority ought to be created to safeguard Jewish interests. This idea has been familiar to me for quite some time, and was already so at a time when our situation was much less precarious than today.

As for myself, I have no talent for politics, and incapable of persuading others (in short, I am not a “Führer”). I must also tell you that I hardly dare to hope that it will be possible to bring the Jewish people to such an undertaking, with the various groups irreconcilably opposed to each other. Above all, the successful among us live in fear (unjustified, in my opinion) that a supranational commitment would make their position as citizens precarious. I have therefore unfortunately had to give up believing in the feasibility of this cherished idea. In any case, I would nonetheless still be prepared to work for its realization if a serious possibility were to present itself.

Cordially yours,
A. Einstein

Julia Friedrich is Director of Collections at the Jewish Museum Berlin.

Aubrey Pomerance is Head of Archives at the Jewish Museum Berlin.

Daniel and Judy Kaufmann are Hans Kaufmann’s eldest son and granddaughter respectively. They were both born and raised in Santiago, Chile, where Hans Kaufmann fled from Germany in 1939 with his parents. Judy is an illustrator based in Barcelona, from where she has published illustrated children's books for different countries, while Daniel, a Hebrew University graduate, lives between Washington DC and Nice, working, writing and teaching on international development and global governance. Both are globetrotters, cyclists, and avid readers. Although they have not been living in the same country, they remain very close.

Irmtrud Wojak is Managing Director of the Fritz Bauer Forum and the Buxus Foundation. She is a historian, author and curator. Her research focuses on contemporary legal history, exile, and cultures of memory. In 2004 Wojak curated the first major exhibition on the Auschwitz trial, and in 2009 she published the authoritative Fritz Bauer Biography. She was Deputy Director at the Fritz Bauer Institute in Frankfurt until 2005. In 2007/08, she was Head of the Historical Department at the International Tracing Service (Bad Arolsen) and founded the NS Documentation Center in Munich.

Ofer Ashkenazi is an Associate Professor of History and Director of the Richard Koebner-Minerva Center for German History at the Hebrew University of Jerusalem. He has published on various topics related to German and German-Jewish history, including the interwar peace movement in Germany, Albert Einstein's politics, German Jews in Mandate Palestine, and the participation of Jews in German visual culture. His previous book is entitled Anti-Heimat Cinema: The Jewish Invention of the German Landscape (U. Michigan Press, 2020). His current project deals with Jewish photography in Nazi Germany.

Derek Penslar is the William Lee Frost Professor of Jewish History at Harvard University. Penslar takes a comparative and transnational approach to Jewish history, which he examines in the context of modern capitalism, nationalism, and colonialism. Penslar’s most recent books are Theodor Herzl: The Charismatic Leader (2020/German ed. 2022) and Zionism: An Emotional State, which will be published next year. He is currently working on a book entitled The War for Palestine, 1948: A Global History. Penslar is a Fellow of the Royal Society of Canada and Honorary Fellow of St. Anne’s College, Oxford.